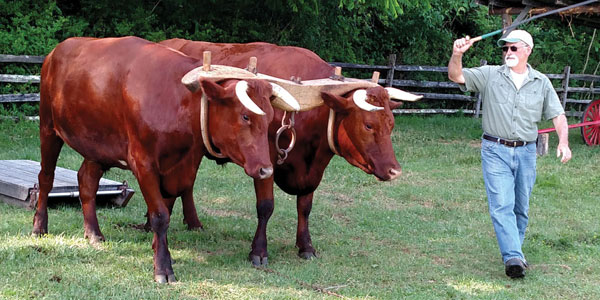 by Tim Huppe of Farmington, NH

I grew up on a small family farm in Farmington, New Hampshire. My father worked off the farm during the week and my mother, in the early years, was a stay at home mom. Dad kept a small herd of beef cattle and replacement heifers. We had a family cow and hand milked her twice a day. There was always a pair of working cattle for use in the woods. We raised two hogs each year. One for our freezer and the other to sell. We kept laying hens and raised meat rabbits. There was usually a horse or pony for us kids to ride or drive. Our garden was large. My mother filled several cellar shelves with home canned goods. Also, in the cellar, were two ten gallon crocks filled with salt pork, a couple hundred pounds of potatoes, a barrel of cider, apples, and several cords of firewood. We made our own hay.

I was interested in working steers from a very young age. Before I bought my first pair of bull calves, I trained a couple of pairs of replacement heifers to work in the yoke. Dad was fine with this. When it was time to sell the heifers they were quiet and good on a halter.

It was easy for a kid to get a part time job working on a farm on my road. Within two miles of my house there were four farmers shipping milk, a large commercial orchard and vegetable operation, a Christmas tree plantation, commercial lowbush blueberry fields, and a wholesale plant grower.

I worked at the largest dairy, on the farm and on the milk delivery route. I also worked for the wholesale plant grower and the Christmas tree grower. Many of these farmers had kids my age. We had pick-up ball games, were in the same 4-H club, went to the country fairs together, attended church youth group, camped and fished, and much more. And of course, every farm had a pond to swim in. My neighbor friend once said to me, “I grew up thinking that every road was like ours.” I guess I did as well.

I started buying and pairing up my own bull calves. I worked my teams on the farm and competed at the fairs. As a member of the New Hampshire 4-H Working Steer program I was making friends from across the state and throughout New England, most who had a similar story to my own. In fact, one of the friends I met at the fairs is my wife of 37 years. Ox teamsters, 4-H club leaders, parents, and others invested countless hours building the foundation of the working steer program so that it would last for many years.

The culture of the ox was rich across New England. On my road alone there were several good ox men for me to learn from, and many more in the surrounding area. Even the men who were too old to still be working cattle, would give of their time telling us stories of when working cattle was economically practical. I remember stories of oxen hauling cordwood to the brickyards, hauling loads of White Birch bolt wood to the turning mill and returning with wood ash to be spread on the hay fields. They described in great detail about teams and four ox hitches hauling saw logs to the portable mills. They shared exciting stories of oxen possessing more than average power and stamina, greater than average girth, high levels of training and abilities, and much more. And even more interesting, was the often times colorful descriptions of the teamsters that trained, worked, and competed with the ox teams.

After more than 45 years, the New England 4-H Working Steer program is still producing good teamsters and good young adults. And of course much credit needs to go to the individuals who continue to compete in open showing and pulling contests at the country fairs for doing their part to keep the culture alive. If not for them, not only would the excellent level of performance cease to exist, but I fear the use and the culture of the ox would be all but gone.

Credit needs to also go to the individuals who cared so much about the culture of the ox that they spent many hours researching and writing down credible and at times nearly forgotten information to be shared through their books.

Sadly, the majority of the teamsters, who once worked cattle on the farms, on the road, and in the woods for financial benefit have long since passed on.

Myself, and others of my generation who were fortunate enough to have worked beside these men and women, learned from them, sat on a bale of hay and listened to the true life stories and the legends, have a certain responsibility to pass on the information. If not us, then who?

I am a teamster, a father and grandfather of teamsters, a former 4-H Working Steer Program member and leader, an ox yoke maker, a builder of draft animal equipment, and now, a teacher.

I have been a member of the staff at Sanborn Mills Farm since 2005. Due to the generosity and dedication of the SMF founders, Colin and Paula Cabot, we have the opportunity to share the culture and teach the skills for training and working cattle and building draft animal equipment. We have assembled not only an experienced staff of ox and draft horse teamsters and instructors, but also a talented group of wood crafters, blacksmiths, millers, and millwrights, farmers, ornamental horticulturists, and more.

The use of draft animals goes well beyond the boundaries of New England. And so does the desire for information on the subject.

I hope that by sharing with you a bit of my background you will have an understanding of what fuels my desire and sense of responsibility to pass on the information and the skills that were so generously passed on to me and my ‘oxen world’ contemporaries.

When I teach individuals the technical skills of husbandry, training, and working with cattle, I play a role in opening the door for them to become part of a culture that is so important in our lives.

Please reach out to us and let us know what we can do to help you with your draft animal program. You can sign up for one of our many workshops, or we can customize training sessions to fit your needs and schedule. – Tim Huppe