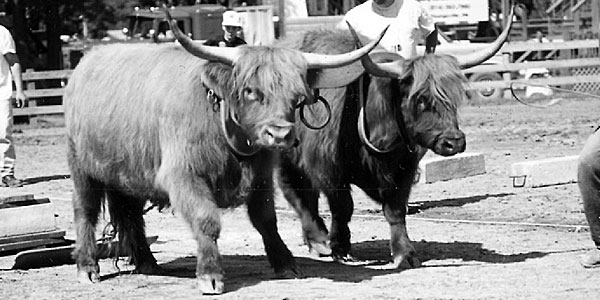 Nestled among the hills of Warren County, PA, there is a great county fair located in Pittsfield. My husband Pete and I discovered it a few years ago while looking for oxen shows near our area.

We had missed the fair the past couple years and had been itching to get back over there. This year we made it and were delighted to see all our oxen friends again.

Howard Van Ord of Russell, PA, heads up a great group of 4-H kids and their working steers. This is the only oxen 4-H club we’ve found in Pennsylvania. (Any more out there?)

We arrived just in time to find Andy Van Ord teaching this years’ fair queen, Jamie Salapek of Warren, PA, to drive his Irish Dexter oxen named Blackjack. She was a good sport and gave it good try!

The first class of the day was the open single ox log pull. The younger 4-H members gave it a good try with their calves. The judges are always patient and offer help when needed. They are careful not to discourage the kids and instead, turn it into a learning experience for them. The winners of this competition to 5th place were: (There was a three way tie for first! So they decided by going by their hitch time.) 1st – Dana Van Ord with John, a 5 year old Holstein. 2nd – Andy Van Ord with Blackjack, a 14 year old Irish Dexter. 3rd – Chad Nickerson with Tom, a Holstein calf. 4th – Royal “Grandpa” Nickerson with Henry, a yearling Milking Shorthorn. 5th – Burt Nickerson with Butch, a 5 year old Belgian Blue.

The next class was the team ox log pull: 1st – Lewis Van Ord with Amos and Andy, 14 year old Irish Dexters. 2nd – Howard Van Ord with Daisy and Mae, a pair of Devon heifers born this spring. Boy are they impressive!! 3rd – Royal “Grandpa” Nickerson with John and Henry, a pair of yearling Milking Shorthorns. 4th – Dana Van Ord with John and Henry, a 5 year old pair of twin Holsteins. 5th – Chad Nickerson with Tom and Jerry, a pair of Holstein calves. Next year they are going to split this class into Jr. and Sr. divisions to give the younger kids a better chance.

After the log skid everyone broke for lunch and a rest from the heat. It was a beautiful sunny day with the bluest of skies with big fluffy white clouds. They couldn’t have asked for a better day! Pete and I ate lunch at the Cornplanter Pavilion and watched as the pulling horses entered the arena for the pulling contest that afternoon. We recognized several names from our area that had made the trip to compete. We then wandered through the rabbit and poultry barns and several other animal barns. We checked out the Domestic and Agriculture buildings, too. It’s nice to go to a fair that puts more emphasis on agriculture than carnival! Getting back to the “Bull Pen” (the ox barn) we found everyone getting ready for the ox pull.

This was the last year at the fair for Howard’s big Holsteins, John and Henry. They are now living in Tampa, Florida, with a new owner. Pete and I saw them the first year we found the fair as calves! Howard has done a great job with them and now he has an impressive pair of Devon heifers he’s working with. He also has a pair of linebacks at home and several others.

We will look forward to seeing everyone next year. We want to thank all the 4-H members, the Nickerson’s and the Van Ord’s for putting on such a nice show. I noticed that the stands had a lot of people in them and they were enjoying the show too.

Special “Thanks” go to Howard for putting my husband back in the ox business with a pair of nice Milking Shorthorn steers!