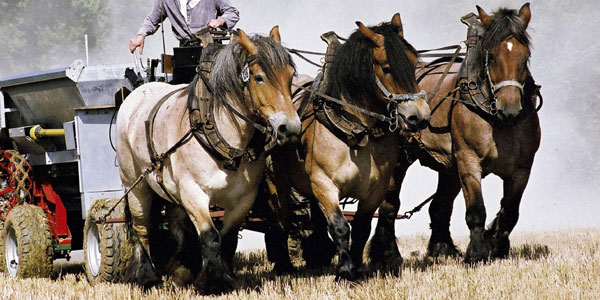 Pferdestark – The Shop Window for Modern Animal Traction in Europe

With the greatly increased European interest in energy and environmental issues, it is a most appropriate moment to encourage modern, effective and well-managed use of animal traction and horse power once again and to re-evaluate living horse power as a source of renewable and ecologically sound energy. In 1992, the Interessengemeinschaft Zugpferde – IGZ (German Working Horse Association) was established as a registered charity to promote the breeding of heavy horses and the use of animal traction and horse power without antiquated nostalgia. Despite distinct scepticism, sometimes even hostility, on the part of believers in technology, IGZ and its constantly increasing membership (more than 1,000 members at present) endeavour to preserve known fields of operation for the working horse and to establish new ones.

The strong European movement in recent years led to the foundation of FECTU (Fédération Européenne du Cheval de Trait pour la promotion de son Utilisation) in 2003, of which the IGZ is one of the foundation members as are the Southern Counties Heavy Horse Association, British Horse Loggers (both Great Britain) and 10 other associations from all over Europe. FECTU, based in Luxembourg, represents about 4,000 persons in Europe involved in the modern use of traction animals – horses, mules, donkeys and oxen – in agriculture, forestry, wine and cider making, horticulture, tourism and education.

Quite a few IGZ members are organic farmers and profit from their working horses. One of them was recently awarded the “Förderpreis Naturschutzhilfe” by the German Federal Nature Conservation Agency for the use of horses as an environment-friendly aid in a conservation area. Equally modern and ecological sound farming is possible thanks to the development of modern implements and machinery in recent years, and so farmers are able to take advantage of the new and modern machinery developed, for example, by Charlie Pinney, England, or Kurt Ohrndorf, Germany.

Since 1996 the IGZ and the Westphalian Open-Air Museum at Detmold have organised the biannual international event, PFERDESTARK, offering a place to exchange ideas under practical working conditions, and demonstrating the effort having gone into developing practical new equipment, harness and other requirements for the working heavy horse. The PFERDESTARK 2007 is to be held on 25th and 26th August, 2007 at Detmold, and again about 200 heavy horses from 12 European countries and their drivers will come together to demonstrate modern horse work to the international audience. The venue is situated in the east of the federal state of North Rhine-Westphalia at Detmold, the former residency of the principality of Lippe. The Open-Air Museum, displaying rural heritage on over 100 hectares (more than 250 acres), is dedicated to the preservation of rare breeds (horses, cattle, sheep and poultry).

PFERDESTARK is the European version of the U.S. Horse Progress Days. Nowhere else in Europe can be found more modern horse drawn machinery and equipment than at Detmold, the shop window of draught horses at work on the field and in the forest. Working demonstrations and international competitions in ploughing, logging and driving are part of this two day event, as well as an international draught horse show. Traditionally IGZ does award prize money and awards to innovative horse drawn equipment on that occasion. Six prize winners received the IGZ Innovation Award in 2005:

Elmar Stertenbrink’s limer hitched to three heavy horses is especially designed for woodland improvement; with the aid of an engine and a combined ground drive granulated lime can be spread in exactly the right dose over a width of 16 meters (Photo 1).

The Kassine, by the French PROMMATA, is a one-wheeled device to carry a walking plough, cultivator, harrow, etc., focused on the use in the developing world – a simple equipment, to be produced and repaired on easy terms and usually to be hitched to donkeys or oxen, but also a useful tool in the vineyards as shown at Detmold (Photo 2).

The Pintow Triple System by Charlie Pinney’s Cart Horse Machinery, a compact equipment consisting of a two-wheeled hitch cart (which can take shafts or a pole), a power pack (a petrol engine with electric start and a hydraulic pump) and the rear axle with a category one, three point linkage, was driven with a spreader at Detmold (Photo 3). Cart Horse Machinery is linked with Lebanon Valley Morgans in the US.

Among the prize winners was also Norbert Moeller’s three-wheeled forecart, built after plans published in Lynn Miller’s ‘Work Horse Handbook’, which is very useful when no pto or three point linkage is needed. The forecart is adjustable for big as well as for small horses; Norbert would usually drive Fjord horses (Photo 4).

The HISKO was another prize winning hitch cart, developed by Kurt Ohrndorf and produced at his farm with regenerative energy of horse and cattle dung from his biogas plant. Some of its highlights are an infinitely variable adjustment of the pole to fit horses of all sizes, balance of the pole weight by moving the hitch cart platform, height-adjustable single- or doubletree, well sprung swivel chair adjustable to the left, the middle, and to the right of the platform, removable hand pump or battery powered hydraulic pump, attachment of a trailer or the rear axle in the middle of the axis’ fulcrum, pto trough drive included, backfitting with removable engine possible, and use of standard accessory equipment with three point linkage

Frank Waibler’s MFT presented a prize winning mower with the superior cutter bar working without blockage because the finger and cutter move at the same time. Only one cutter has to be dressed and the cutter is easily removed, its service life is given as 20 hectares. Widths of 1.22 meters, 1.37 m, 1.52 m, 1.67 m, 1.82 m, 1.97 m and 2.12 m are available; from 1.67 m upwards the fold up can be hydraulically operated. The MFTmower can be used with almost every hitch cart and either be powered by pto or with an engine of its own as demonstrated at the PFERDESTARK 2005 (Photo 6).

In all these years, nearly 100,000 visitors have watched draught horses of almost 20 different breeds: All German draught horse breeds – Rheinisch- Deutsches, Suddeutsches, Schwarzwalder and Schleswiger Kaltblut – are wellrepresented and do compete with Belgian and French breeds – Belgian, Ardennes, Bretons, Percherons, Comtois, Boulonnais – and Dutch Draughts, Swiss Freibergers, Polish cold bloods, Haflingers, Fjord, Shire Horses and others, under realistic working conditions. Breeding stallions working in pairs, teams and singly are regularly seen amongst the four-legged participants; German breed societies do not allow any breeding stallion to be used at stud without having proven his temperament and ability to work beforehand.

Unlike so many events featuring big horses, the theme is firmly focused on the present and future. Horsemen from all over Europe take the opportunity to meet old friends, make new ones and discuss ideas and problems in an open and informal fashion rarely encountered at more conventional agricultural shows.

Further information in English is also obtainable from www.pferdestark.org.