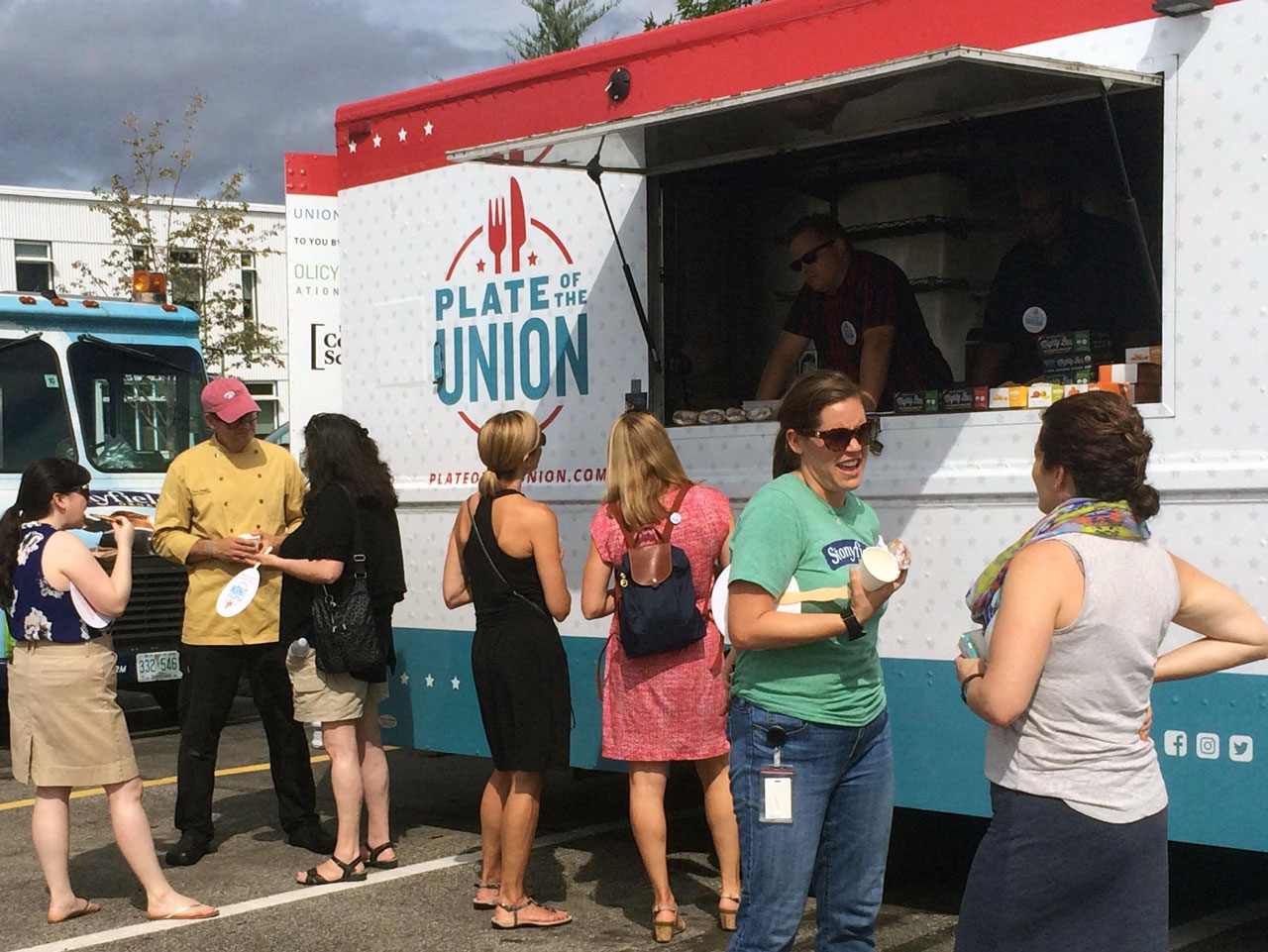 Plate of the Union Food Truck in Londonderry, NH on Thursday.

Plate of the Union Events in Portsmouth, Londonderry, and Hanover Call on the Next President to Reform our Food System

Londonderry, NH – This week, Plate of the Union, a collaborative campaign calling on the next president to take action to fix our nation’s food system, launched its “Battleground States Food Truck Tour” stopping in Portsmouth, Londonderry, and Hanover, New Hampshire. At Stonyfield in Londonderry yesterday, President of the New England Farmers Union Roger Noonan, Portsmouth-based Chef Evan Mallett, Dartmouth Professor and Union of Concerned Scientists Board Chair Anne Kapuscinski, and President of the Environmental Working Group and co-Founder of Food Policy Action Ken Cook spoke to a crowd of hundreds about the need for action to reform our food and agriculture system.

“Our current food system is out of balance. Agricultural innovations have enabled American farmers to produce abundant crops, but 1 in 7 Americans are malnourished in our country – this is not right and must be fixed,” said Anne Kapuscinski, Dartmouth College and Union of Concerned Scientists Board Chair. “The entire nation feels and sees the effects of this broken system. This reality drives Plate of the Union to bring more people into the movement calling for food and farm policy reform. We need leadership to start with our next President to truly transform the system to produce healthy food on healthy farms with livable wages for all food workers, and I applaud Plate of the Union for bringing this conversation to the candidates.”

“The next President needs to know that food and agriculture are connected to many critical issues facing our nation — health, economy, immigration, labor and the environment. Americans want leadership to drive better food policies. With a better food system, we can improve our health, preserve our precious natural resources and farmland, protect our workers, and support farming and agriculture, all while saving taxpayer dollars. We must do better to ensure our food system is more balanced, sustainable, and produces real food that is accessible, affordable, and healthy,” Ken Cook, Co-Founder of Food Policy Action.

The Plate of the Union “Battleground States Food Truck Tour” will continue to make stops until election day with events in Pennsylvania, Washington, D.C., Ohio, Iowa, Illinois, and North Carolina, bringing delicious food and an important message about how reform of food and farming policies can improve the health of our familes and our nation’s economy.