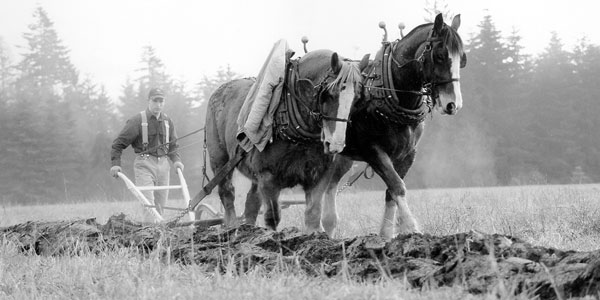 Plowing up a Dream

Plowing up a Dream

The fourth annual Happ’s Horse Power Days proved to be a weekend of “dreams come true.” The event was expanded this year as we make steps toward building the event into something “bigger and better” for both the competitors and the spectators. We want to provide additional challenges for teamsters and their horses, as well as the opportunity to show what they can accomplish together. We hope to help the public learn about breeds of horses, types of plows and other horse-powered equipment, and bring generations who have drifted so far away from working the land a little closer to understanding what it means to those of us who still follow that way of life.

This year, most of the horses were stabled in our training barn. The barn is not yet finished, but one lean-to of stalls is sufficiently far along that we were able to stable horses rather than have them tied to the sides of trucks and trailers. It was quite a sight to walk in and see about 30 head of draft horses standing in the barn. Additionally, Maureen’s new stud colt purchased from Dick Brown of Hudson, Iowa made the trip from Iowa along with Dick’s competition horses and garnered a lot of interest over the weekend. Heritage Farms Turbo is an awesome black Percheron colt and Maureen hopes to build quite a future with him.

Morris Elverud of Cornelius, Oregon handled the judging just as adeptly as he handled his team of sorrel Percheron geldings. Morris brought the team and drove them hitched to a hay wagon to give himself a better vantage point. Riding with him, and assisting in the judging process, was his good friend, George Horner. Both men have years of experience working with horses as each grew up with lines in his hands and went on to spend many years working, breeding and training horses. We wish to thank them both for their part in helping make this a wonderful weekend.

The weather was on our side this year and those watching were able to witness the skills of some excellent horsemen and teams of horses. Clarence Stancil is a local (Pacific Northwest) legend, and at 84 years of age has spent many years working with horses. It shows in his demeanor and in his horses. Dick Brown came all the way from Iowa with four of his black Percherons, including his 6 year old stallion “Herbie,” and demonstrated his true talent and way with horses. Gean Courtney, while not having the years of experience of some of the others, held his own and is going to continue to be a “force to be reckoned with” as he returns to defend his multiple winning titles. The list goes on, too many to name individually, but watching those men and women and their horses stirred emotions of pride and awe.

The addition of a Log Skid and an Obstacle Course on Sunday added a little more challenge and excitement to the weekend for competitors and spectators. The Log Skid proved to be a challenge, but it was taken in stride and some nice performances were turned in. The Obstacle Course also allowed teamsters to show skills perfected by many hours of working with teams of horses. Some nice horsemanship was demonstrated.

Our plans are to enlarge the event more next year and possibly move to a different date. We have been contacted by additional teamsters who are planning to join us next year, and we are anxious to move forward and build Happ’s Horse Power Days into an annual event both teamsters and spectators will mark on their “must go to” calendar.

Best In and Out: Larry Livingston from Olympia, Washington driving Belgian geldings “Dick” and “Duke”