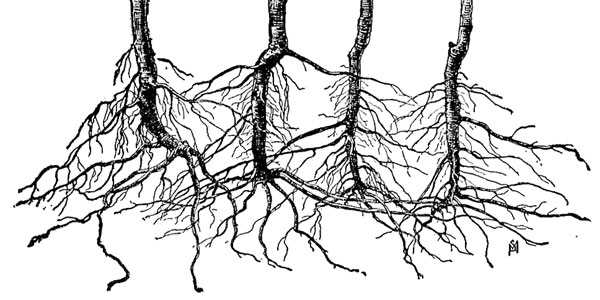 Propagation by Means of Budding and Grafting Part 3

Propagation by Means of Budding and Grafting

taken from The Nursery Manual (1934) by Liberty Hyde Bailey

Grafting is the operation of inserting a cion (or scion) — or a twig comprising one or more buds — into the stock, usually into an incision in the wood. It is variously divided or classified, but chiefly with reference to the position on the plant, and to the method in which the cion and stock are joined. 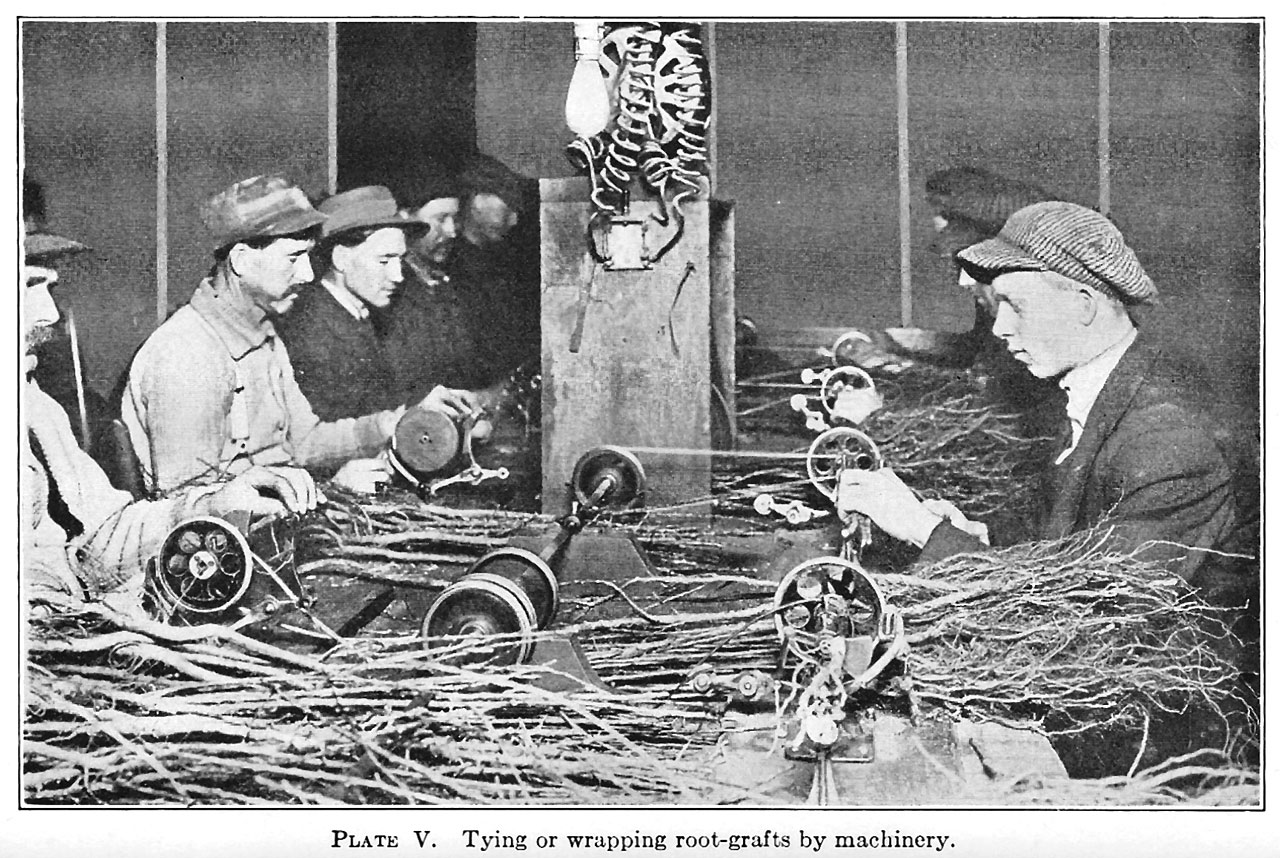 Any method of inserting the cion may be employed in these classes. The best classification, particularly for purposes of description, is that which considers methods of making the union. Some of these kinds of grafting are catalogued earlier in the book. The most important methods of grafting are now to be considered; but almost endless modifications may be made in the details of the operations. The union of the cion with the stock, like the union of the bud and the stock, depends on the growing together of the cambial tissue of the two. It is essential, therefore, that the tissue lying between the outer bark and the wood in the cion should come closely in contact with the similar tissue of the stock.

Cions are cut in fall or winter, or any time before the buds swell in spring. Only the previous year’s growth is used in all ordinary cases, but in maples and some other trees, older wood may be taken. In the grafting of peaches — which is rarely practiced — the best cions are supposed to be those with a small portion of two-year-old wood at the lower end. This old wood probably serves no other than a mechanical purpose, as the recent wood is soft and pithy. It is a common opinion that cions are worthless if cut in freezing weather, but this is unfounded if the species is hardy.

The cions are stored in sand, moss or sawdust in a cool cellar, or they may be buried in a sandy place. Or sometimes, when a few are wanted for top-grafting, they are thrust into the ground beside the tree into which they are to be set the following spring. If the cions are likely to start before the spring grafting can be undertaken, they may be placed in an icehouse. Only well-formed and mature buds should be used. Sometimes flower-buds are inserted for the purpose of fruiting a new or rare variety the following year, but unless particular pain is taken to nurse such a cion, it is likely to give only very indifferent results.

In practice, only three kinds of grafting need be much considered. These are whip-grafting, veneer-grafting and cleft-grafting. 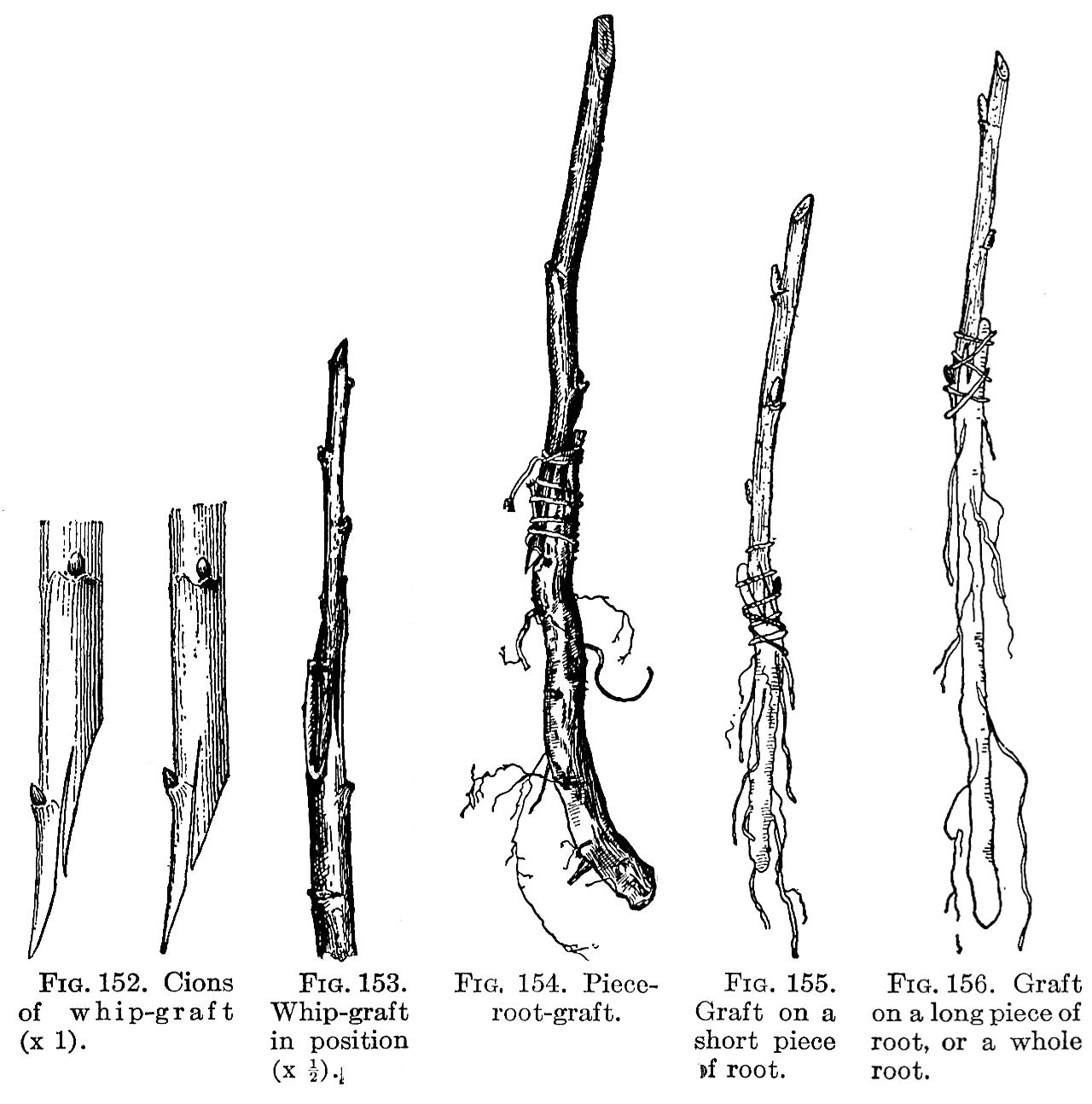 Whip- or tongue-grafting is employed only on small stocks, usually those one or two years old. Both the cion and stock are cut across diagonally, the cut surface extending from 1 to 2 inches, according to the size of the part. A vertical cleft is then made in both, and the two are joined by inserting the tongue of the cion into the cleft of the stock. The operation can be understood by reference to Figs. 152, 153. Fig. 152 shows the end of a cion, cut natural size. The stock is cut in the same way, and the two are joined in Figs. 153, 154, 155, 156. The parts are held firmly by a bandage — as bass bark or raffia — passed five or six times around them. If the graft is to stand above ground, the wound must be protected by applying wax over the bandage.

Any sharp and strong thin-bladed knife may be used for the making of whip-grafts. For small and tender plants, a common budding-knife is sufficient, but it is too light for most work. A good style of knife for root-grafting is shown in Fig. 157. It is much like a shoe-knife, with large cylindrical handle and a stationary blade.

Root-grafting, particularly of fruit stocks, is performed almost entirely by the whip-graft, in winter. The stocks, either one or two years old, are dug and stored in autumn. In January or February the grafting is begun. In true root-grafting, only pieces of roots are used; but most nurserymen prefer to use the whole root and graft at the crown, making the strong “root-grafts” of commerce known as “whole roots.”

In piece-root-grafting, from two to four trees are made from a single root. A piece of root 2 to 4 inches long is used, as shown in Fig. 154. The parts are usually held by winding with waxed string or waxed bands. The string should be strong enough to hold the parts securely and yet weak enough to be broken without hurting the hands. No. 18 knitting cotton answers this purpose admirably. It should be bought in balls, which are allowed· to stand for a few minutes in melted wax. The wax soon saturates the ball. The ball is then removed and laid away to dry, when it is ready for use. This waxed string will remain almost indefinitely in condition for use. Waxed bands, sometimes used, are made by spreading melted wax over thin muslin, which is cut into narrow strips when dry. The string is the more useful for rapid work. The completed grafts are packed away in sand, moss or sawdust in a cool cellar until spring, when the two parts will be firmly callused together. Some propagators eliminate all tying of root-grafts. The grafts are packed away snugly, and if the storage cellar is cool — not above 40° — they will knit together so that they can be planted without danger of breaking apart. If the cellar is warm, the grafts will start into growth and be lost. String or bandages that do not soon decay when growth begins will strangle the graft. The waxed cotton may last too long and do much damage.

In common root-grafting in the East and South, the cion bears about three buds, and the root is about the same length, or perhaps shorter. The variable and unknown character of these roots, as regards hardiness, renders it important that, in very severe climates, roots should be obtained from the same plant as the cion, the hardiness of which is known. It is the practice, therefore, in the prairie states to use a very long cion — 8 inches to a foot — and to set it in the ground up to the top bud. The piece of root serves as a temporary support, and roots are formed from the cion. When the tree is ready for sale the old piece of root is often removed, or sometimes it falls away of itself. In this way own-rooted trees are obtained. Even cions of ordinary length often emit roots, as seen in Fig. 158, but such cions are not long enough to reach into uniformly moist soil. Some varieties of fruit-trees are found to make roots from the cion more readily than others. Root-grafting is often cheaper than budding, as it is performed when labor is available, and two or more trees may be made from one stock.

Cuttings rather than seedlings may be used as stocks when a variety that grows readily from cuttings unites quickly with a variety that does not grow from cuttings. Fig. 159 is such a case; the stock, or cutting, is the true Downing mulberry, which strikes readily. The cion is any of the varieties of Morus alba or M. rubra, as the New American or Hicks, which roots with difficulty from cuttings. In this case, the buds have been cut from the stock to prevent it from suckering.

The relative merits of budded and root-grafted trees have been strongly championed in the past, on both sides. The apple is the only tree concerned in the controversy in a large way. After many years of discussion and a considerable number of inconclusive experiments, it is fair to say that the final results in orchard work show no recognizable differences. Good orchards are produced by either kind of stock. In the East, the demand is for budded trees; in the Middle West, probably nine-tenths of the apple stock is root-grafted. Choice by the planter (so far as choice exists) between budded or whole-root grafts is probably mostly a matter of habit. The question has practically passed its controversial stage.

Probably the method of propagation — whether by bud or graft — is not the important factor. The test turns on the size of roots in the grafting process and the method of trimming the stock; and the greater number of manipulations the roots receive in the grafting operation may have some significance. A whole-root grafted tree should be comparable with a budded tree, the entire root system (or practically so) being used in both cases. When it comes to piece-roots, the question resolves itself into the sizes of the pieces, their age, whether from young seedling stock or from older trees, whether the pieces are used merely as nurses until the cion becomes ownrooted. In certain experiments, the piece-roots have given better account of themselves in after years than the whole roots; in other tests the reverse has been the case. This indicates that other factors besides the size of the original root enter into the problem; yet one may conclude that the whole root is preferable to the piece-root, other things being the same.

The western-grown apple seedling (Fig. 160), produced on deep rich land and with a long growing season, lends itself well to piece-root-grafting. The imported stock, known in the trade as French Crab, is likely to be more branchy (Fig. 161; both from Peck, Cornell Reading-Course Lesson). The buyer of apple or other trees is likely to place much importance on the root system; yet the orchard test may not verify his likes or prejudices. Many years ago there was a decided reaction against the well-formed whole root and the Stringfellow method practically removed the roots and planted the root-stub. Fig. 162 represents what the planter would call good root systems. How valuable they would be to the orchard is quite another question; yet inasmuch as abundant roots are the natural product of a tree it is fair to assume that they should be accepted at face value. 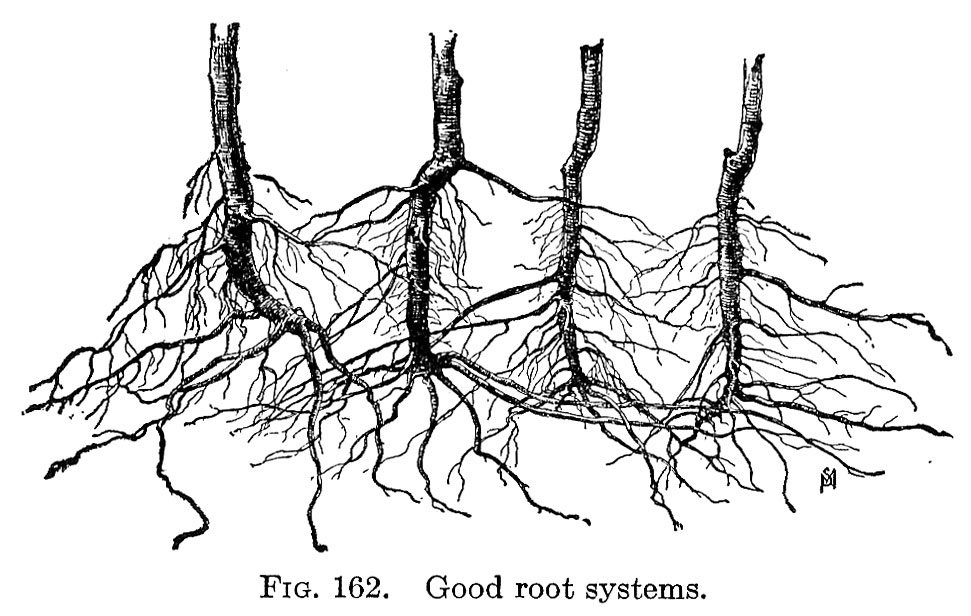 There are many modifications of the whip-graft but it will not profit us to pause long with them.

The side whip-graft places the cion on the side of a stock rather than on the end of it. The tongues in cion and stock are cut the same as in the customary method already explained.

An old-fashioned modification of the whip-graft leaves the end of the cion 4 or 5 inches long, so that it may lead downwards into a bottle or dish of water, thereby absorbing sufficient moisture to maintain the cion until it unites with the stock. Another modification, with the same purpose in view, is to allow the ends of the tying material to fall into the water. These methods are called “bottle-grafting” in the books. They are really of little account, although they might be employed for certain difficult subjects amongst ornamental plants; but even there, better results can be obtained by placing the grafts in a close frame, or by packing them in moss.

A “double whip-graft” is shown in Fig. 163. In this method, the cion is cut on one side into a wedge, and on the other with a long tongue (H). The stock is provided with two clefts, at R and P. This cion, having two supports in the stock, forms a most intimate contact with its host; but it is too slow, and the rewards too slight, to warrant its general use. This is sometimes, but erroneously, called a saddle-graft.