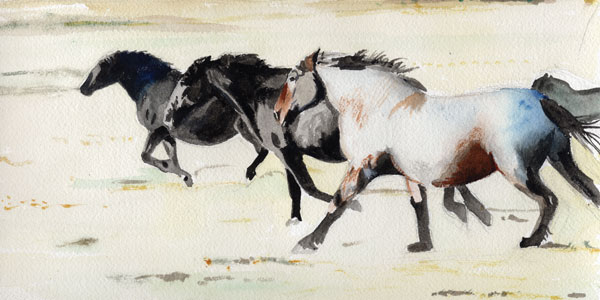 The first horses Clyde retired were a matched team of American Belgians, a mare and gelding sister and brother, Sally and Joe. He’d felt lucky that Sally was a year older, a little wider, not so tall, a stabilizing influence, always the more sensible. Excitable and giddy, Joe could get himself in trouble, see something strange and put a foot wrong that could threaten the whole enterprise. They were his first farming team, the ones he couldn’t help but make mistakes with, so he was set to give them an easy retirement, let their training slowly leak away, along with his sins and missteps of those early days. He didn’t think they’d just run wild, get spooky around all things human, but wasn’t sure. He hadn’t had much experience with old horses. Even that first summer, he realized they would still come sniff his pockets, to see what he might have for them.

Clyde just now was between families. A widower with his Ella May in the ground entirely too young, and their girl and boy grown and gone. No grandkids yet. And as he started reading the obituaries in the paper, his old friends and acquaintances were drifting away or dropping off. He’d always been restless, had often had a job in town not just for the money but to feel connected to things outside the little farm world. He’d gotten a job driving cab to meet new people, and get to know the new developments and cul de sacs with fancy names, that were springing up all around.

He found that now he wasn’t working the old team, he took a certain pleasure in seeing what they were up to, watching them from the porch of an evening. Without being obvious about it, he was trying to see what they would do when they didn’t have him harnessing them, telling them what to do. That whole easy workaday accommodation they couldn’t help sharing all those years had to change, now that they were mostly a little herd all their own.

It hadn’t been until he bought a new young team, started plowing with Wingnut and Molly, that he realized how far Sally and Joe had slipped, how slow-footed, worn and tired they’d become. They stood there stamping, uncertain, didn’t hunker down and pull a load like they had when they were young. It was something, to watch this sure-footed young team pick up their feet and move anything they were hitched to, with an irresistible will. Sure, they had things to learn, they’d have to get used to his equipment and his ways, but their youth looked to be all promise, already a fine team, even Wingnut with his helicopter ears.

So without ever saying so outloud, he soon quit using Sally and Joe for much of anything. The whole idea of retirement hadn’t yet occurred to Clyde, though he would have said he was no spring chicken himself. It must have been in the back of his mind somewhere when he bought that new young team, ready to reach for the light and be recognized, that all at once he saw the future, at least for Sally and Joe, and maybe in the shadows for himself.

Although he let Sally and Joe stand around these days, they called after him and the new team when they started for the field, so he couldn’t help thinking of them. They still had ceremonial uses, like giving the neighbor kids hay rides in the fall, and leading the town’s 4th of July parade. Both routes were all on a level, no big loads, and as the old teamsters liked to say, they were bomb-proof. Stood and did what they were told, and nothing new by now could rattle them.

One night when he was trying to get to sleep he remembered the cat his two kids had had when they were young, how Emily would do anything they wanted, even eat the lima beans they slipped her under the table, that they got served at supper. But then they grew up and moved on into their lives, and left the cat on the place with him. It wasn’t that he was bad to her exactly, he just ignored her, and the poor thing was probably lonesome. He also felt abandoned, so wasn’t as kind as he might have been. Yet she went on living around him, growing older imperceptibly, following her rounds, going out and in. Catching a bird or chipmunk to lay stiff on the porch as gift or tribute. The day came at last when she couldn’t leap up on the kitchen windowsill and click her tag against the glass to be let in. It had been a modest trick of long-standing, but one day at seventeen it was beyond her. That evening when he heard her try to jump a second time and fall, he felt ashamed, rushed to the door, held it wide and made some welcoming sounds of his own. He was cooking himself some supper, a steak and potato with gravy, and some steamed carrots and peas. He finished it, cut the potato and steak up, buttered the vegetables, carried the plate to the table as the cat drew her esses and sounds round his ankles. Then he set the plate down on the floor in front of her, stroked her gently and let her eat all she wanted while he sat and spoke his encouragement.

Emily didn’t eat much, but was still curious, tasted and sniffed at it all, then sat by his side and watched him finish the plate. From then on he gave her a little of whatever he cooked and ate, along with her cat food. He practically quit using salt because it was bad for her. She lived another two and a half years, her tail waving many a small, silly blessing over them.

So when he started watching these two horses he’d put out to pasture, he thought he’d better give them more things to look into and mull over. After all, they’d been smart around him, caught onto new things pretty quick, and when he messed up and got them confused they’d seemed forgiving. So at night he started putting things out in their pasture — first was a rusty red pickup with a blown engine. Each night or two he’d do something different — go leave the hood up, then the driver’s side window, then the passenger’s, throw an armload of hay in the bed, anything to change it up. They studied the truck minutely, and when it showed no startling signs of life started rubbing their rear ends against the tailgate. Finally Joe backed up and tried to sit down in the bed, but slid out on his rump and surprised himself.

That truck worked so well for a few weeks that he started planting new things around the pasture for them to eat come spring, sprinkled handfuls of oats and rye here and there, alfalfa and cowpeas. He wondered what it was horses liked. Things to eat, sure. But maybe also things to play with and in like water, and more than that, other horses.

So after a few months that first fall, he put the four horses together on their day off, usually Sunday. And they didn’t just get along. They played follow-the-leader, raced and frolicked a little, with two of them always new to the other team’s pasture, with things to be tasted, shown and done. He’d sneak out in the night with the kids’ old blue plastic wading pool, run it full with a hose, and leave a beach ball floating there.

But then one night fresh out of ideas he thought those horses were at least as smart as that little cat, especially when they put their heads together like they had done every day all their lives. And like Emily they were shy but curious, and didn’t much like being watched.

So next morning he rose early and looked all around the farm house. Rolled up his wife’s Persian rug in the parlor, that if any disaster should befall he knew he might go to his grave unforgiven. Then he propped the front door wide, likewise the kitchen door, and without making a sound tiptoed out across the gravel yard and unlatched the gate to the old team’s pasture, then got in the pickup and ran out to the road, closed the big front gate behind him, and drove to town to have a leisurely breakfast of pancakes and eggs. Horses couldn’t work a doorknob, and couldn’t fit up the stairs to the bedrooms. And they were shy. It might take them a few hours to sniff the pantry, take a drink out of the toilet, and have a good look around. They wouldn’t break much and might appreciate a look at his simple world with its odd tastes and smells, its strange pictures on the walls. There were plenty of things they’d know like his boots by the door, and things they might never make sense of, like the dark chandelier in the front hall that with each step tinkled overhead.