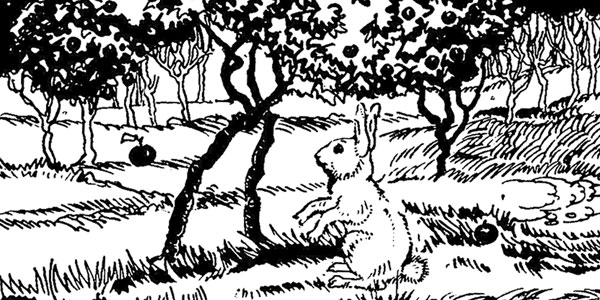 Rabbits in the Northern Orchard and Forest

Rabbits in the Northern Orchard and Forest

by Joseph D. Conwill of Rangeley, ME

Maine’s western mountains are a paradise for many kinds of wildlife, or game depending on your point of view. The most plentiful must be rabbits – really, they are snowshoe hares, but I’ll use the common nickname. They are cute, but they can be trouble in your apple orchard, and they can even modify the composition of your young forest re-growth for decades to come, so they are worth some attention.

Winter is the time when rabbits become a problem. Trees are a favorite food when other sources are hidden beneath the snow. Rabbits will eat twigs and small branches in their entirety. They will girdle larger stock, up to about an inch and a half in diameter, to obtain the nutritious inner bark, but this is fatal to the rest of the branch or tree. And they walk on top of the snow, which reaches depths of over four feet here, giving them access to much of the young forest as food.

When trees reach two inches in diameter they seem to be safe from danger, as it is difficult for the rabbits to get their mouths around the stock. The damage instead is to young trees, or branches and twigs of older ones which are accessible from the snow pack. In the apple orchard, damage is mostly confined to the perimeter trees, since the rabbits do not like to stray far from cover. Young trees can be protected in winter with plastic spiral guards extended two feet over the highest snow line. When the trees get older, the branches, rather than the trunks, are the problem. It may be useful to head the trees high, that is, to remove easily accessible lower branches during pruning. Regular patrols of the orchard during winter are a good idea; even if they do not serve as a deterrent, they will keep you abreast of the activity.

The woodlot is harder to protect due to the sheer number of trees. A mature older woodlot will have little problem, but how can you protect the new re-growth if you do some cutting? Rabbit damage varies from species to species, and it is useful to know the difference.

Maple is the all-out favorite rabbit food in winter. They will eat twigs and gnaw bark, and will kill many trees. In a mixed maple-fir woodlot you can easily lose 75% or more of your maple, tipping the mix in favor of the fir of which you probably already have too much. Plastic guards are not cost-effective on a forest-wide scale, but the nicer maples can be protected in winter by wrapping the trunks in aluminum foil, to a point at least two feet over the highest snow cover. Rabbits could easily chew through, but for some reason they usually don’t. Perhaps they do not recognize the foil wrap as a tree. The foil should be removed promptly when the snow melts, as it can offer protection for beetles and caterpillars. Another possible strategy is to leave a close clump of fir around young maples when thinning. This will reduce rabbit access, but it also slows the growth of the maple and makes it vulnerable to rabbits for several extra years.

Beech has problems similar to maple. I can’t speak about oak since it does not grow where I live.

White birch is a different story. Rabbits love the twigs when the trees are small, but they do not like the bark, so when the birches grow tall enough to be well over the snow cover, they are safe without protection. Yellow birch might be different, as it contains oil of wintergreen, but I don’t have enough of it to know.

Pine and spruce are extremely vulnerable to rabbit browse of the twigs and buds when young. In a mixed softwood stand, the proportion of these trees can be greatly reduced by rabbit browse. Important individual specimens can be protected when young by wrapping terminals and important branches in foil overwinter, but this is much more time-consuming than wrapping the trunks of maples. Red pine should not be foil-wrapped since this causes mortality to the needles, but there is no problem for white pine or the spruces. Rabbits do not like the bark of these softwoods, so if the trees get tall enough to survive the siege they are usually safe from girdling. Overly vigorous thinning of the woodlot can create longer-lasting difficulties for spruce, however; it is surprisingly flexible, and can tip over under heavy snow loads, allowing rabbits to destroy tops and branches that are not usually accessible.

Balsam fir is not a favorite rabbit food. They may occasionally eat the twigs or even girdle the bark, but only under near-starvation conditions. This species is so over-plentiful in the northern woods that it generally needs no protection.

From the point of view of human interests, what do rabbits do? At my place, the terrain is too rough to mow the orchard, but rabbits keep the taller weeds under control nicely, and they do not bother the sod. Presumably their droppings are useful as fertilizer, although this would be hard to quantify. Among the forest trees they eat are mountain-ash, which I don’t want near the orchard since it is an alternate host for the round-headed apple tree borer. And of course these “bunnies” are cute. They have learned to live with me, and I have learned to live with them!