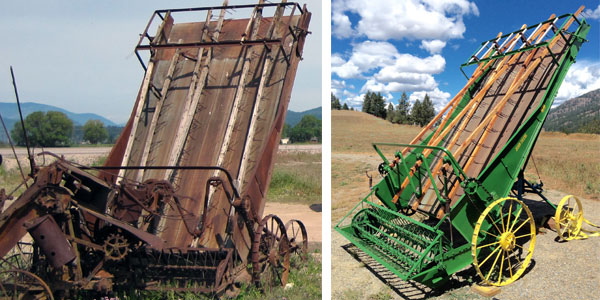 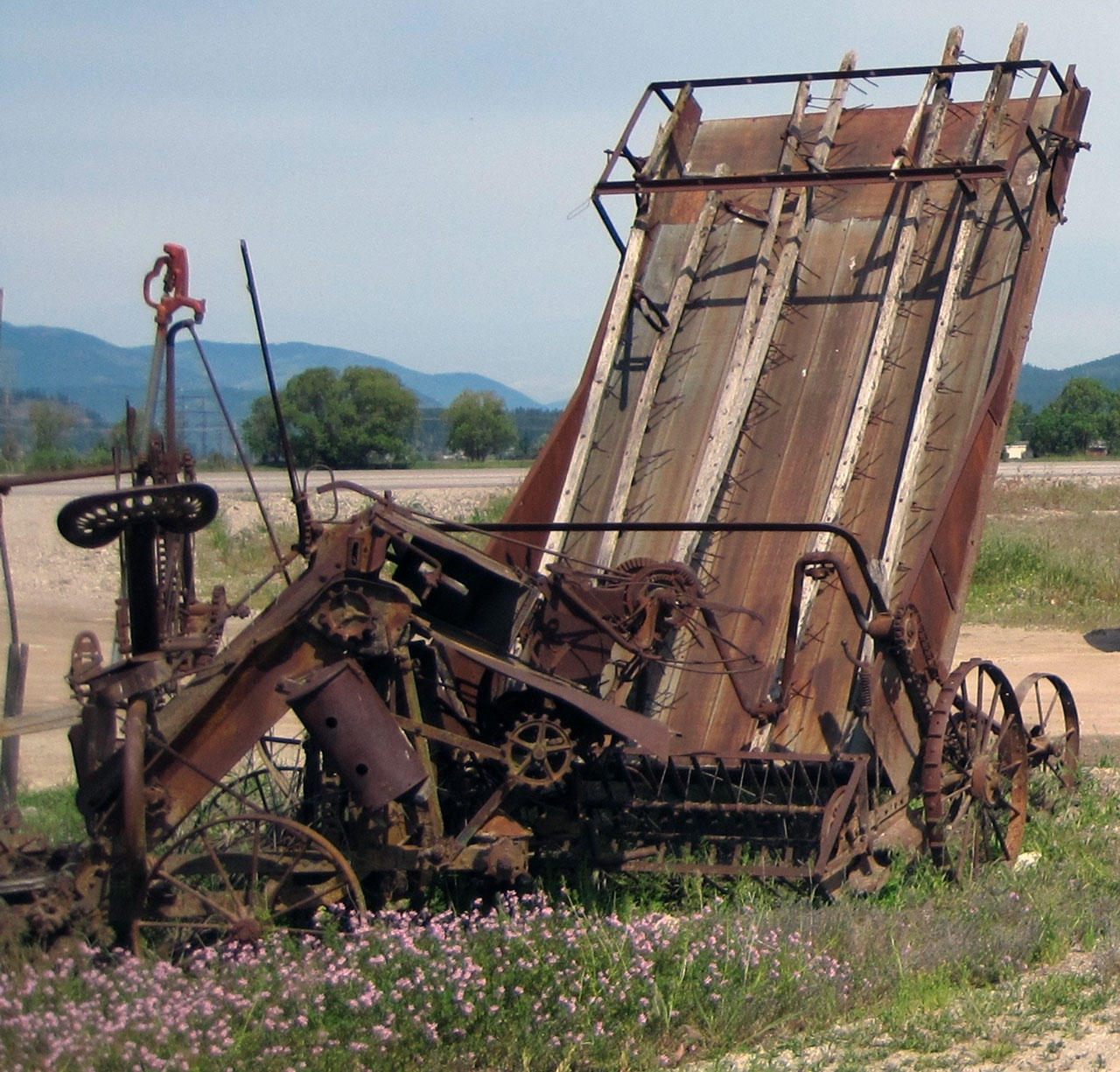 The hay loader as we found it among other abandoned equipment.

“The ideal combination of equipment is the side-delivery rake and the hay loader. With these two, highest quality hay can be produced at the lowest cost.”
– The Operation, Care and Repair of Farm Machinery, John Deere, 1945

Our family has been building up a diversified farm for six years now in Northeast Washington. The farm is in a beautiful valley in the foothills of the Rockies, home to wolf packs, huckleberries, and Sasquatch. This area was once the proud milk-shed for Spokane, and we plan to run an all Jersey producer-handler dairy once I retire from the U.S. Coast Guard in a few years. 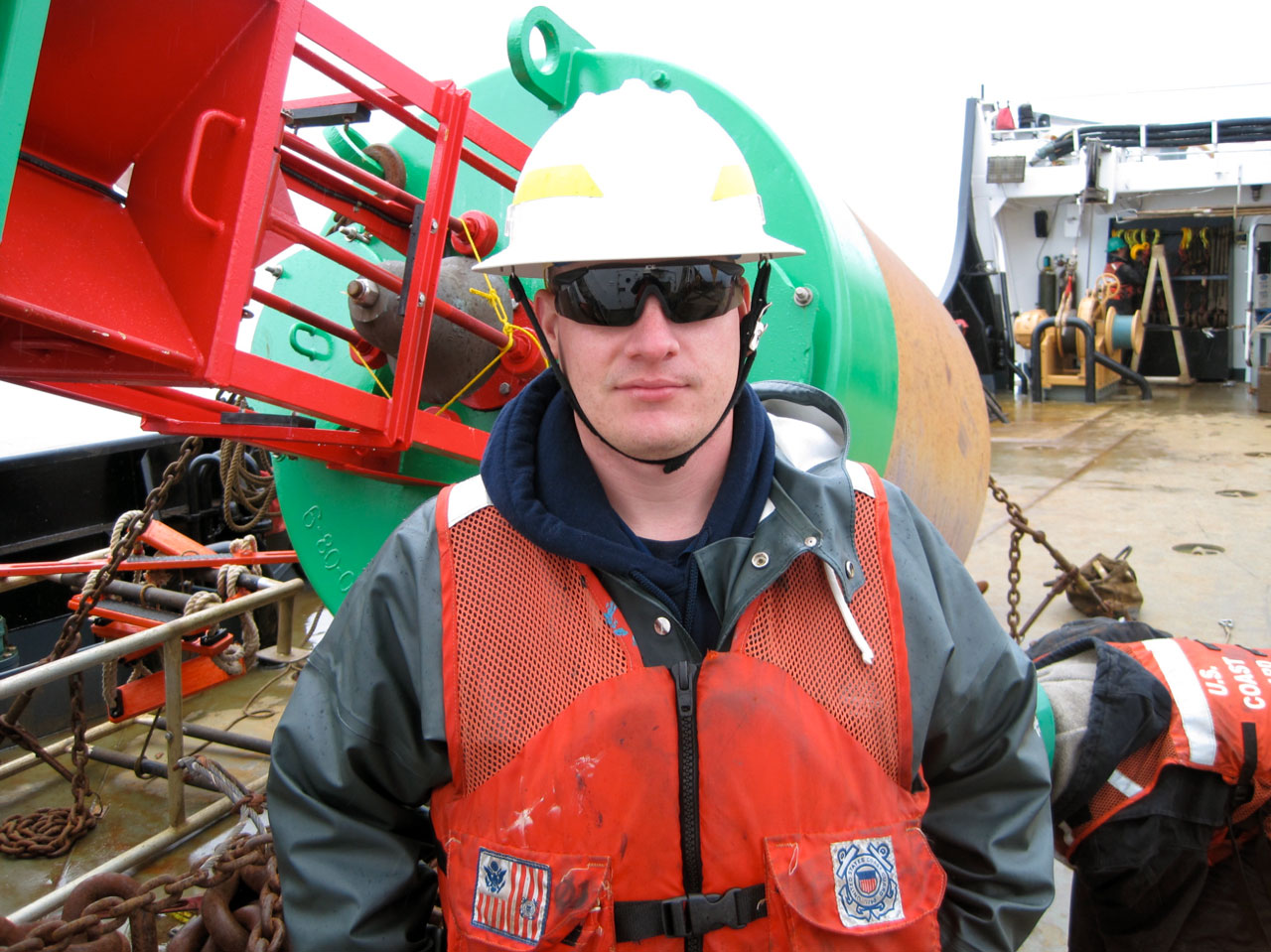 As a Boatswain’s Mate in the Coast Guard, I have been lucky to gain more experience with wire and rope work, painting, rigging gear and working safely.

A common death knell for farms, especially small start-up farms, is buying feed and other inputs. Our goal has always been to size our operation to our 40-acre farm, where we will graze and hay all we need. A main component of this goal is having economical hay equipment that we can fix and maintain ourselves including a sickle-bar mower, side-delivery rake, hay loader, and wagon. The hay loader was the first piece of farm equipment we bought back in 2011, and its transformation is quite a story. 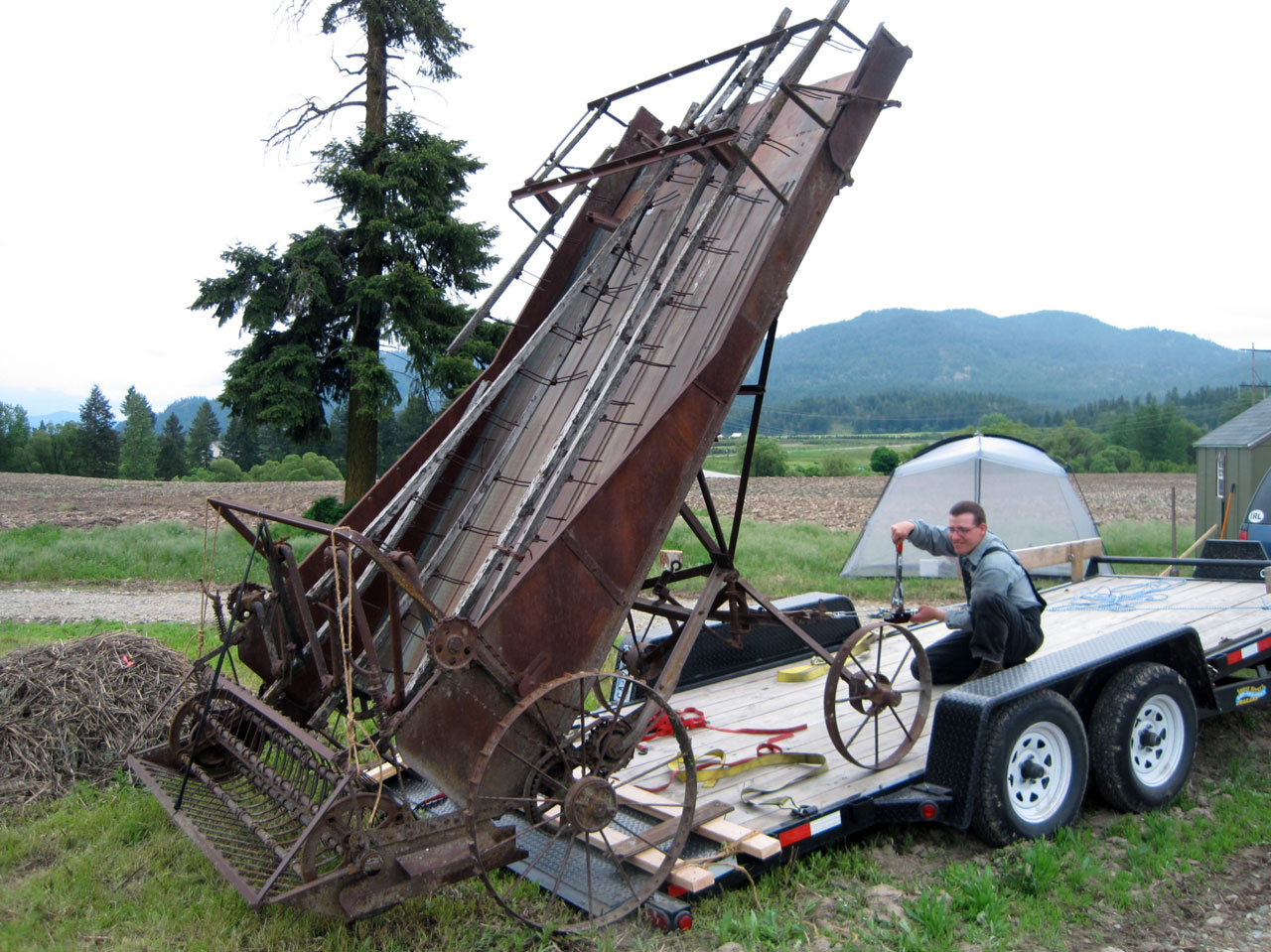 A hayloader has quite a ‘sail area’ and we were lucky to only have to trailer it about eight miles.

Early on we decided to put up loose hay for a couple of reasons, perhaps the number one being not having to buy and repair a bailer (“knotters broke”). Enter the hay loader. This wonderful machine rolls over a windrow and lifts hay up a ramp to dump onto a hay wagon. Interestingly, I remembered seeing a dilapidated hay loader sitting alongside the highway north of Spokane while riding in my Dad’s milk truck as a child. I wondered if I should try to buy it. “Do you know when to buy a hay loader? When you find a hay loader.” Wise words from my wife, Virginia.

Soon we were the proud owners of a circa 1942 John Deere A-306 Combination Raker-Bar Loader in very sad shape. What was left of the wood parts was beyond saving. It had broken castings, likely from hard use, or abuse. But the main structure was solid, and we saw potential. I slowly trailered it the few miles of back roads to the farm, with Virginia following behind in another vehicle, stopping to pick up pieces that fell off along the way. We sure gave a few neighbors quite a sight that morning! We unloaded and tarped it while we worked on other projects and searched for parts.

And there it sat for four years. Other projects would take priority as we took any possible leave periods to work on the farm. There was a well to drill, power to run. We built a shop, and built fences. The military moved us twice, and for multiple periods I was underway off of Central America and Alaska. 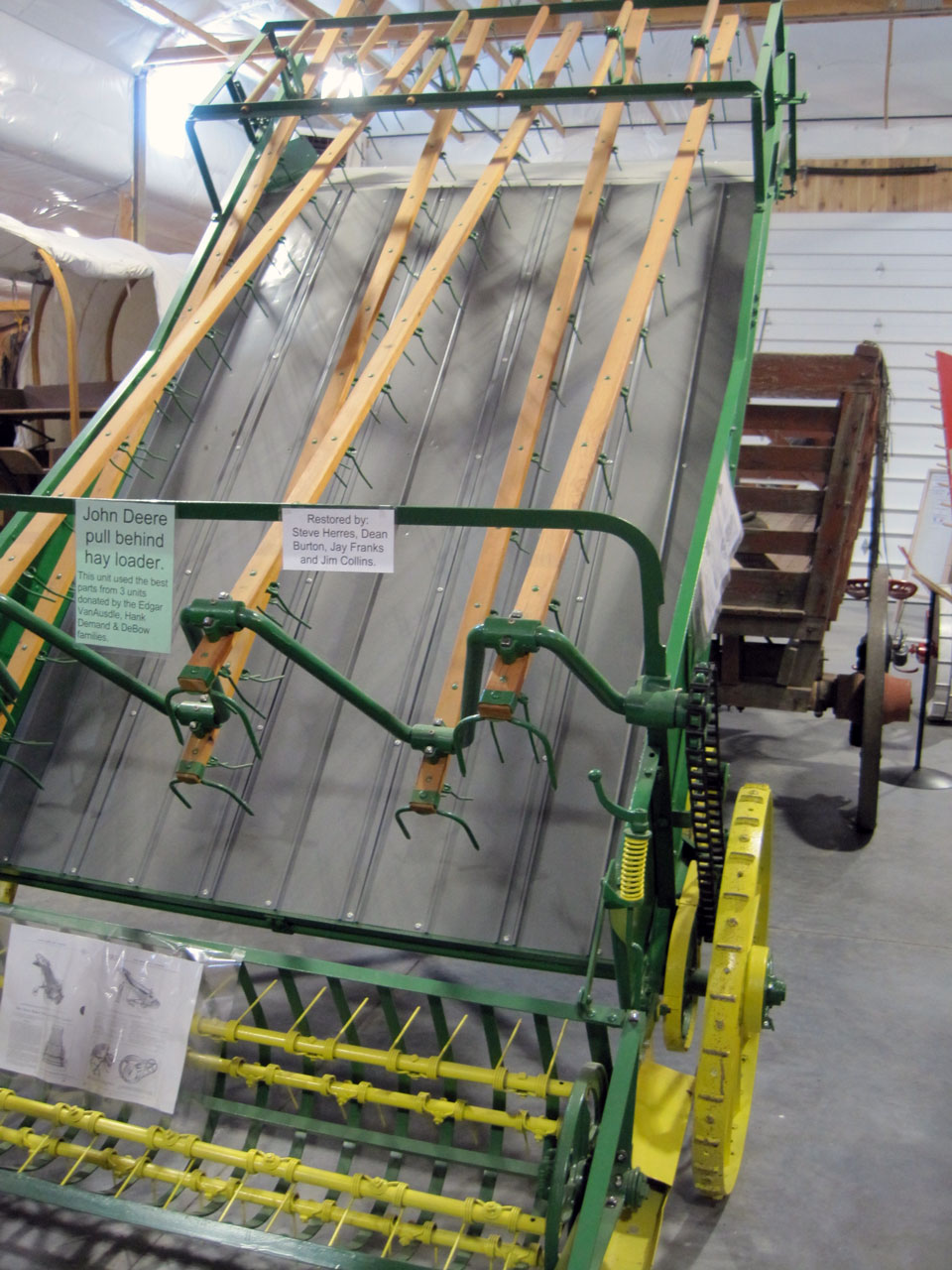 We were able to see a beautifully restored John Deere hay loader at the Eastern Washington Agricultural Museum in Pomeroy, WA. Their museum artifact used the best parts and pieces from three separate hay loaders. Lucky for us, the remaining two carcasses were still at their scrap yard, and for a reasonable donation to support a great museum we could get the parts we needed. I brought home a pickup load of raker bars, castings, and even a complete gathering drum.

I must say, there must have been a determined John Deere salesman in this area as most hay loaders I have seen here are that brand. For those interested in rebuilding a hay loader, perhaps the best place to start is finding out what brand was the most popular in your area. That will certainly help with finding parts, as it obviously did in our case. 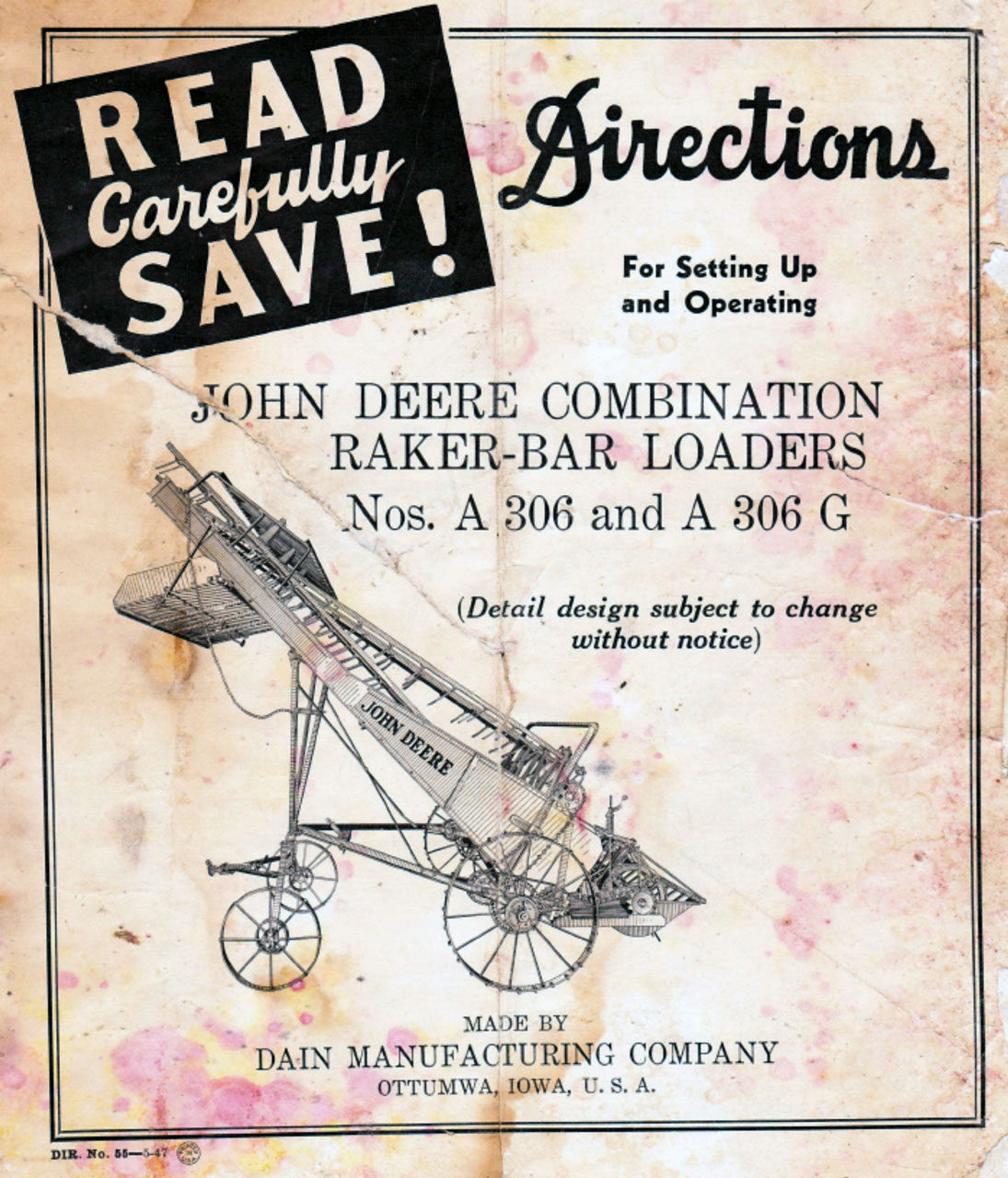 Finding the original manual was very helpful for verifying parts and sizes.

Although I felt pretty confident in the overall operating theory of the machine, I also sourced the original manual off of eBay. This was perfect for actually verifying the various parts and their specific sizes. You can view a scanned PDF as a download from this website address: http://bluecreekdairy.com/ resources/HayloaderManual.pdf

Finally, in 2015, we were able to fix up our hay loader. It looks like a complicated machine with the cogs and drive chains, but by breaking it down to its basic functions, and studying the systems, it’s actually a pretty simple machine. The wood would be easy enough to replace, and we hoped we had enough spare parts from our museum salvaging expedition. Removing the remaining pieces of wood opened everything up and made it easier to work on the mechanicals. We replaced the broken castings with spares, and then jacked up the rear axle and placed it on jack stands. This allowed us to rotate the drive wheel and check the mechanics. Turning it over by hand, nothing seemed to be binding, and everything functioned as it should. So, I broke it down a little bit more, cleaning and lubricating all the mechanicals. There were some other fasteners and such to replace, and I had to do a little sheet metal work. But all in all, it was not in as bad of condition that I originally thought. 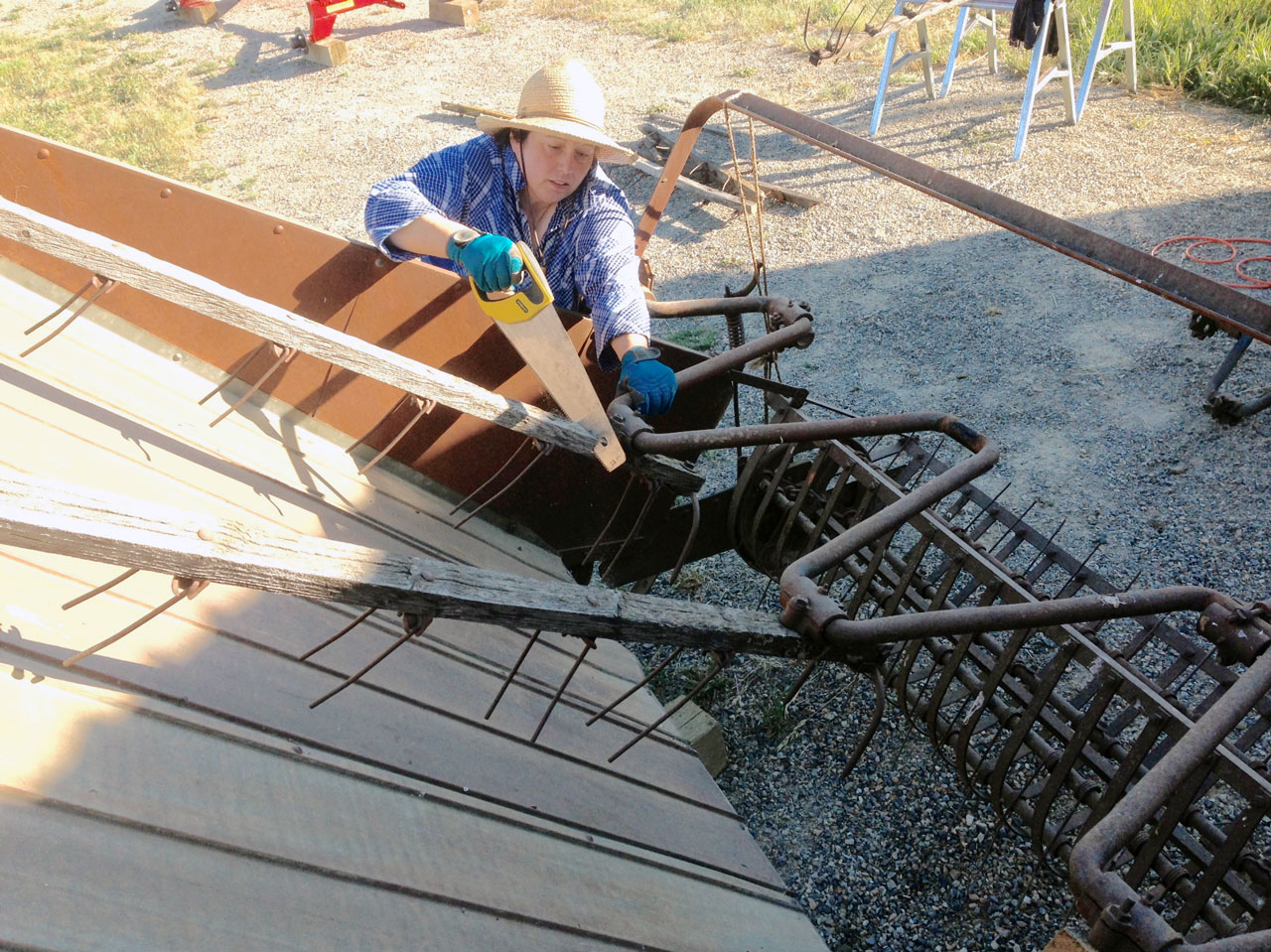 With the mechanics in great condition, we turned to the preservation. This was the hardest part, requiring patience and attention to detail. The deck sheets were galvanized, but everything else had long lost its protective coating of paint. With wire brushes and sanders, we attacked the rust. Because of the rust particles we used N-95 particulate masks, safety glasses, and gloves. With so many angles, small pieces, and difficult to reach places, it was a test in stoicism. If you were good at the game Twister as a child, then you may fare pretty well maneuvering around the pick-up basket and rotating arms. 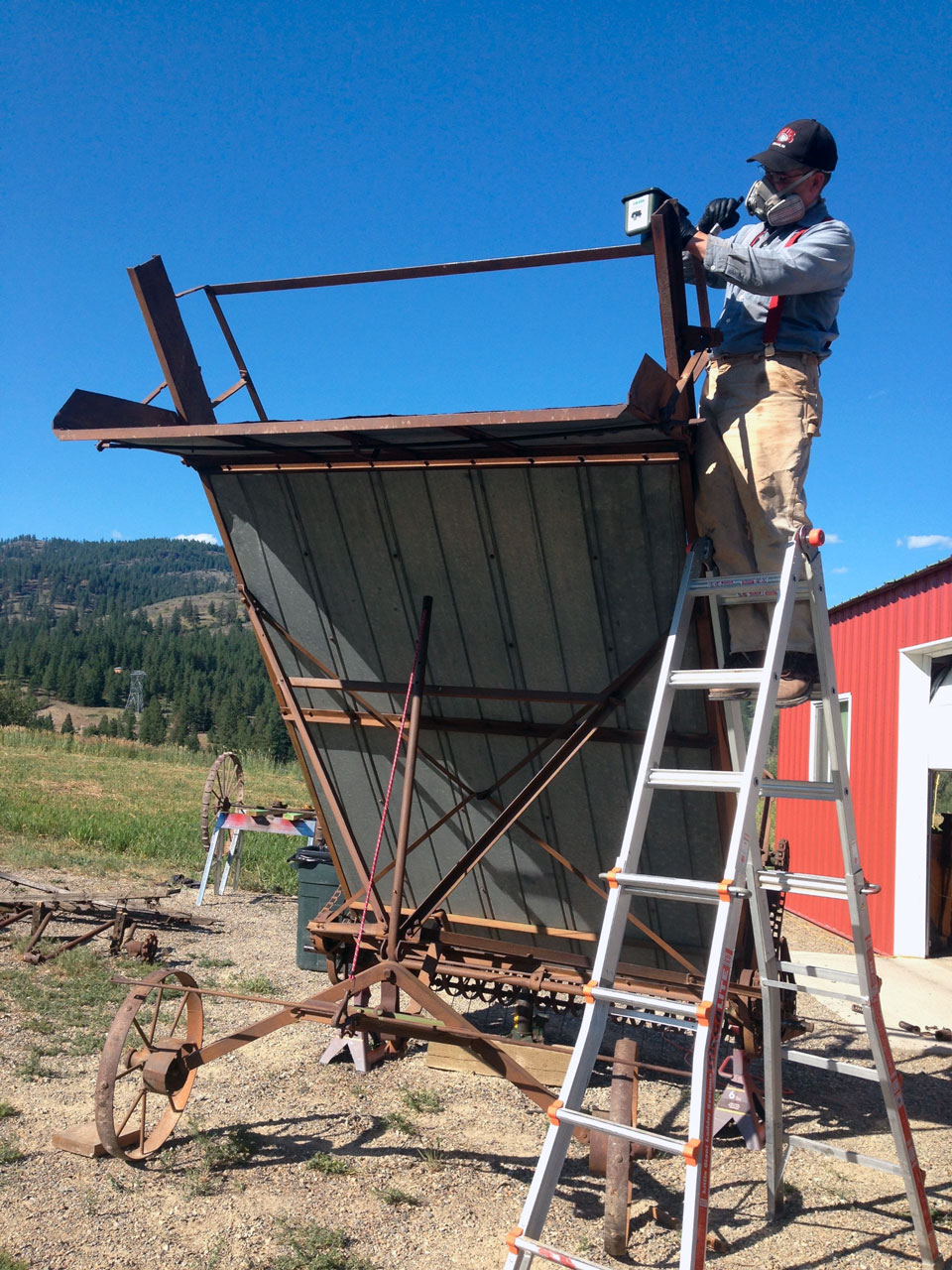 Stacy priming while wearing a respirator. We hope to farm for a very long time and always take appropriate precautions to ensure that we do.

Some would argue everything should have been sandblasted or sanded to bright metal, and this would certainly be applicable to a museum piece. But for a working piece of equipment, and having limited time, the best compromise for us was removing loose surface rust and using a rust-arresting alkyd-enamel primer followed by an alkyd-enamel paint. John Deere green of course! With yellow wheels. Most of the enamel was brush applied, with same brand spray paint used in hard to reach areas. While painting we wore half mask respirators with organic vapor cartridges, disposable gloves, and safety glasses. We finished it off with decals we got, from all places, Binder Books of Sherwood, OR. 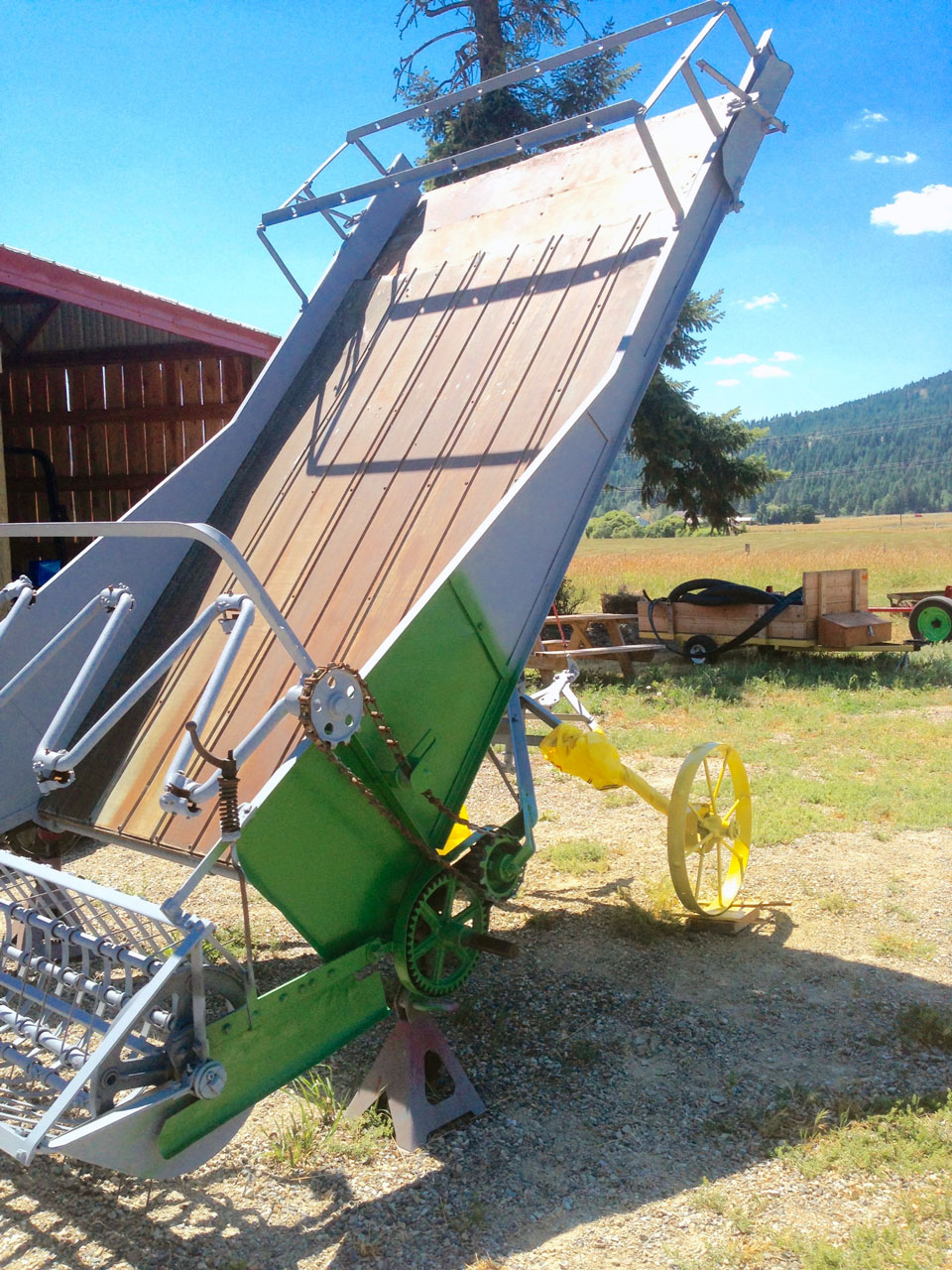 The metal starts coming alive once you starting adding the paint.

Turning our attention back towards the wood parts, we were lucky enough to have one raker-bar that was complete. Although we had raker bar dimensions (1 1/8” X 2” X 135”) from the Owner’s Manual, it was very handy to have this example as a template because it gave us the proper raker bar tooth spacing. We cut new raker-bars out of the best vertical grain, clear Douglas Fir we had. While the original raker bars were most likely a hardwood from the East, here in the Intermountain West, Doug Fir is our go-to wood for farm implements. Using the old raker bar as a guide, we drilled new holes and bolted on unpainted raker teeth. A majority of the carriage bolts had to be replaced, and were easily sourced from the local hardware store. 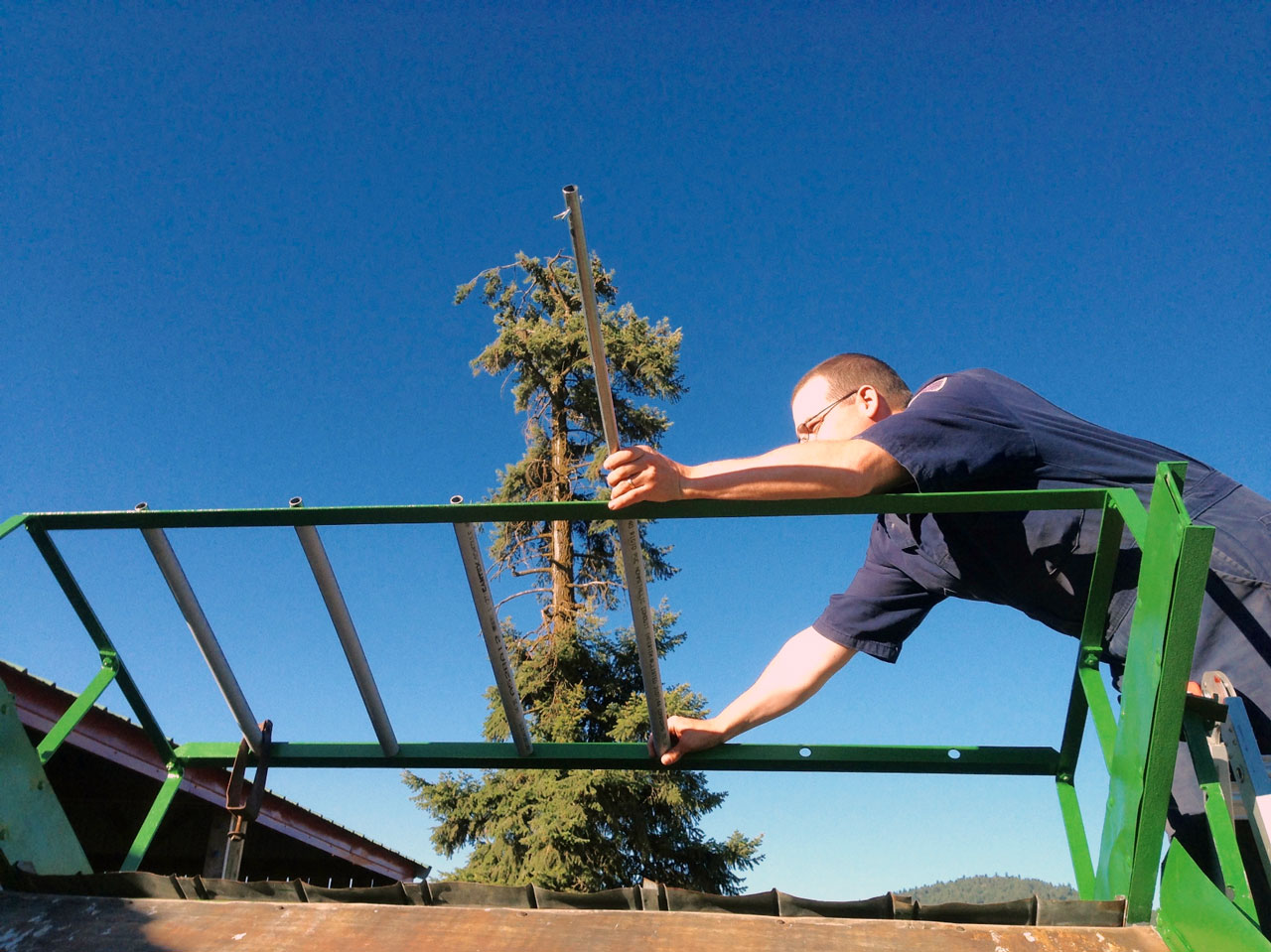 All the wood was treated with Linseed oil instead of being painted or varnished for a variety of reasons. First, the bars are wood most likely to be a weak link that would fail before a more catastrophic mechanical failure, and a clear coat would allow easier inspection. We chose Linseed oil as it is not a petroleum product, offers good preservation and water resistance, requires reapplication encouraging inspection, and perhaps is a hold over from being a Boatswain’s Mate in the Coast Guard. As a warning, remember to let all Linseed oil rags dry flat before disposal to avoid spontaneous combustion and a very bad day. 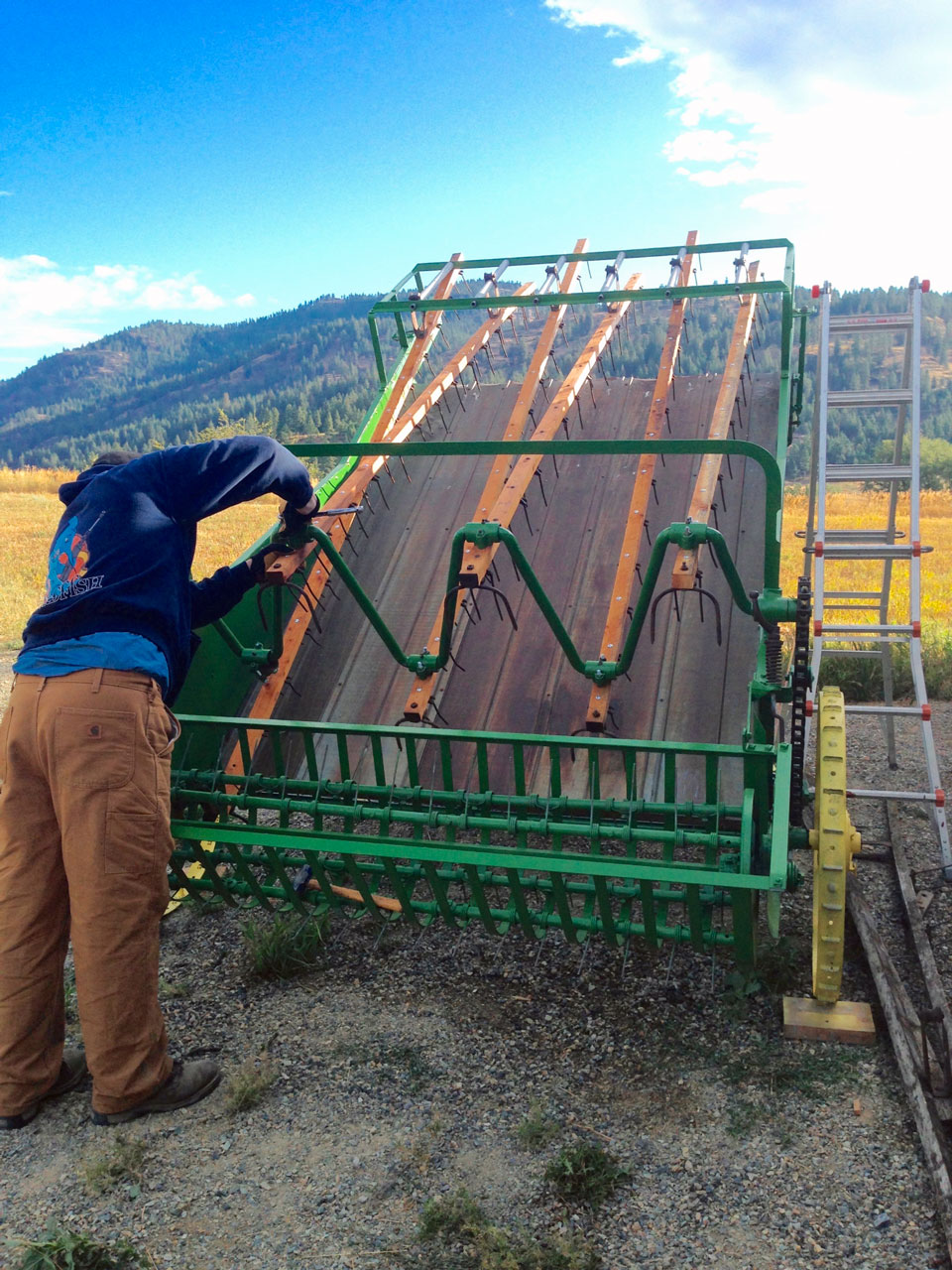 We made the new raker bars a bit thicker and had plenty of teeth thanks to our museum expedition.

Where we departed from original design was with the rungs. These are the dowels at the top of the hay loader that the raker-bars ride up and down on. The rungs were originally wood measuring 1 ¼” by 26 ¾” with the ends turned down to fit into a socket. We looked at possible wood dowels, but were concerned about whittling down the ends and interested in possible modern replacement options. 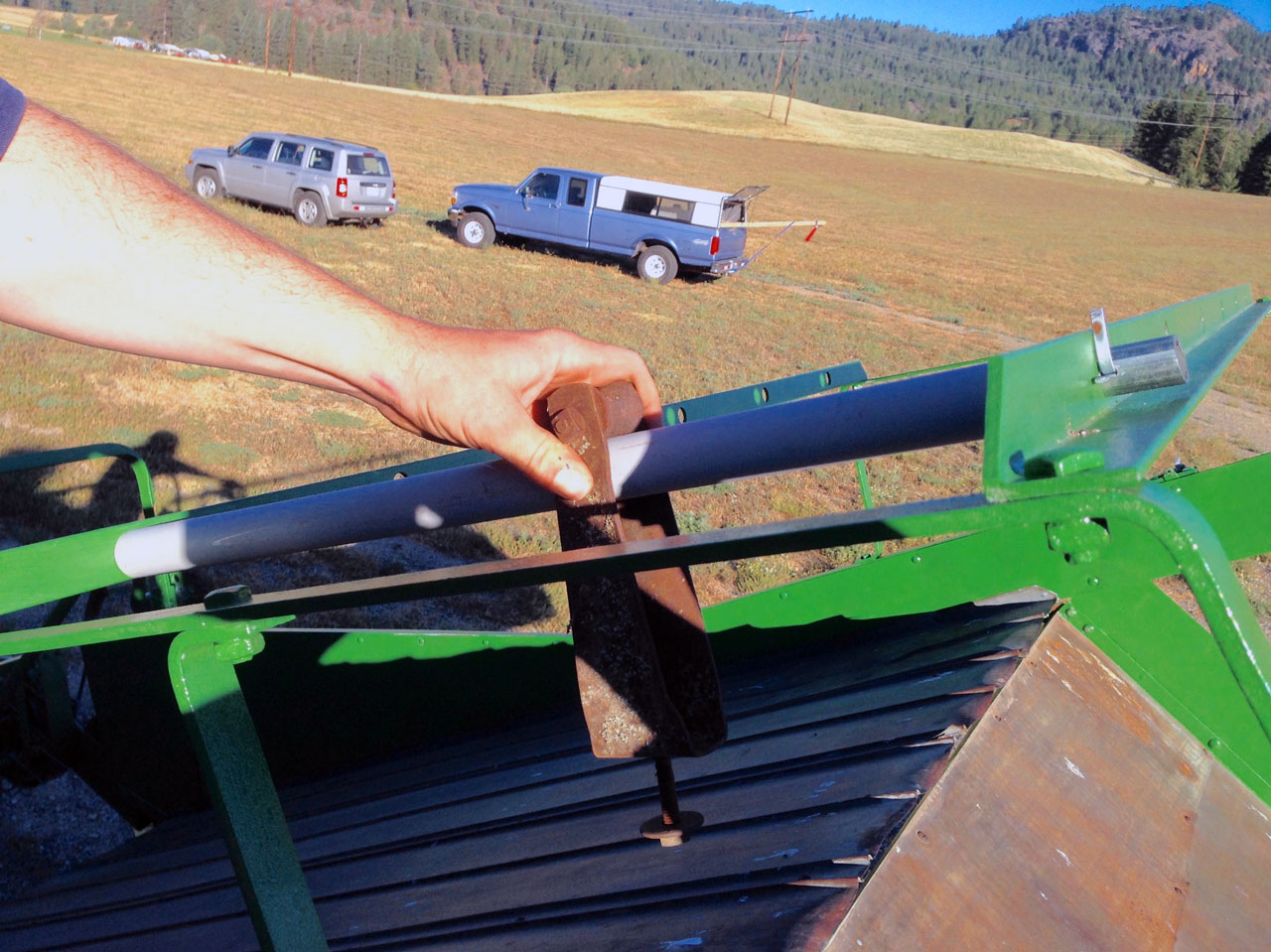 The PVC electrical conduit sleeve was the correct diameter for the raker bar roller supports to glide on.

We finally replaced the wood rungs with Intermediate Metal Conduit (IMC) secured with cotter pins on each end. IMC is heavier than regular Electrical Metallic Tubing (EMT) conduit, and its outside diameter fit into the hay loader sockets perfectly. The IMC is sleeved with PVC electrical conduit cut to fit between the hay loader framework. This brought the rung up to a size comparable with the original rung size. PVC electrical conduit was used instead of regular PVC pipe since the electrical conduit is UV stabilized and thus won’t become brittle when exposed to the sun. I wish I could say I came up with this all by myself, but I got the idea from looking at Doug Hammill’s John Deere hay loader in Montana. Thanks, Doc!

The hay loader pulled effortlessly behind our 1955 Farmall cub. The David Bradley hay wagon is still a work in progress, but that is another story.

After about two weeks of labor spread over the summer and around $600, we had rehabilitated the hay loader to its former glory and it was time to put it to the test. It was late summer by now, but we had some swaths of old hay that got rained on still in the fields. We towed it out there, engaged the hubs, and off we went! It worked better than we ever imagined. We brought a 70 year old machine back to life, and with liberal applications of grease and oil, it should last at least another 70 years! 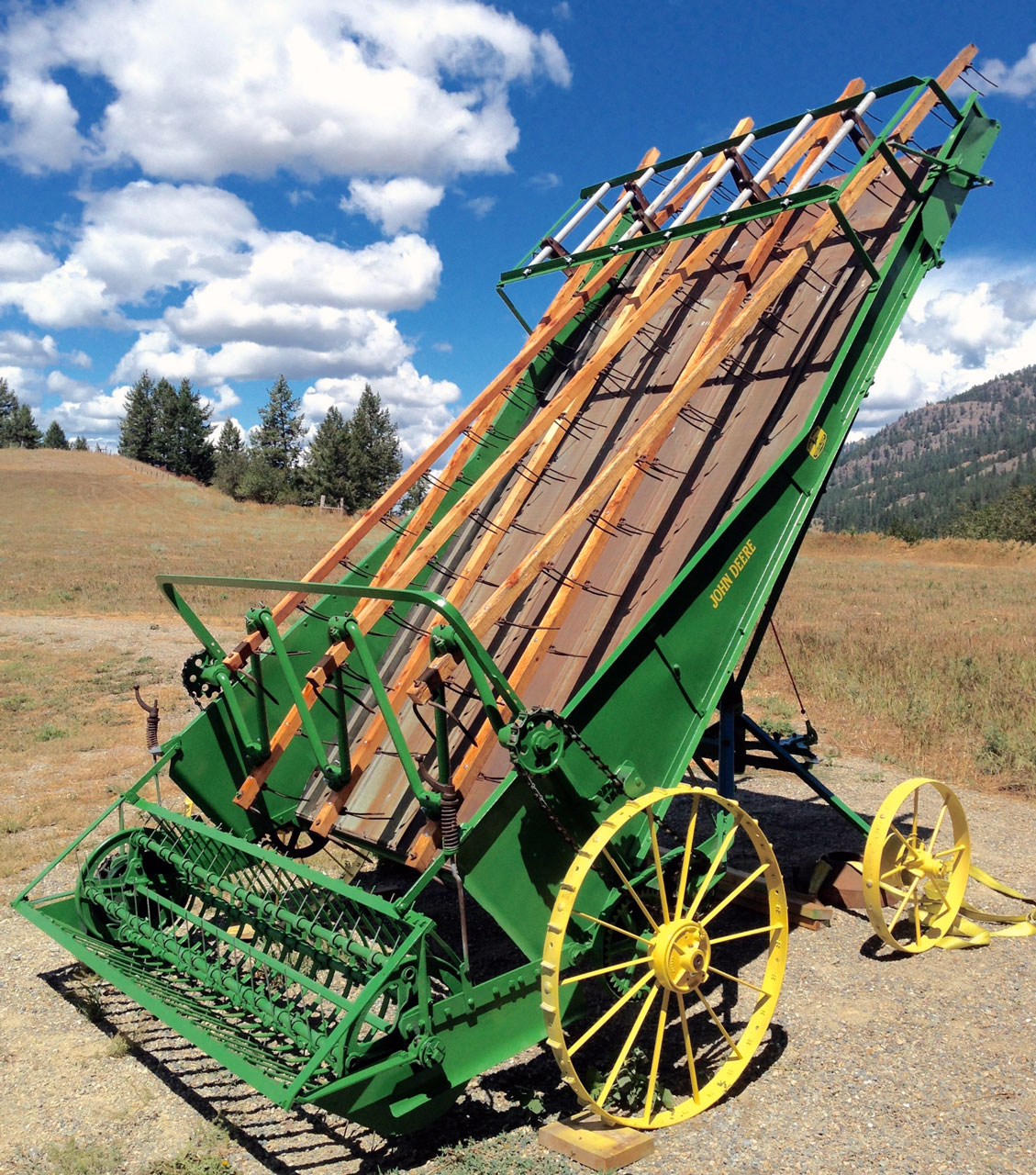 The restored hay loader with new paint and wood looks ready for decades of work.

Blue Creek Dairy Farm is a certified Organic operation located in Northeast Washington. The Thomas family bought land in 2010, and have been building the farm from scratch. While transferring around the country with the U.S. Coast Guard, they have squirreled away equipment and learned much from other farmers. Stacy retires in 3 1/2 years and they very much look forward to being fulltime dairy farmers! They would love to hear from you at midwatch@mac.com.