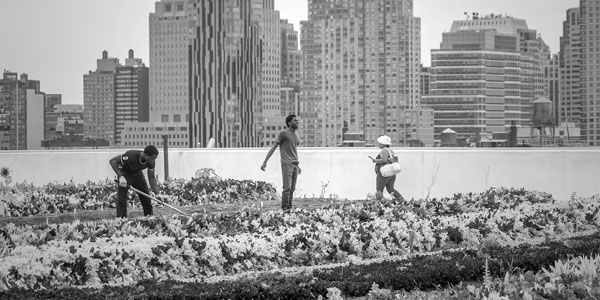 Founded in 2007, the Refugee & Immigrant Fund (RIF), a Queens, New York-based non-profit, began as an orientation center, guiding newcomers to the U.S. through the labyrinthine asylum process and referring them to legal and psychological counseling. Founder and Director Maria Blacque-Belair, a social worker by trade, never expected that urban agriculture would become an integral component of RIF’s programming.

Then in 2010 a photo in the New York Times caught her eye; a massive crane hoisting soil onto the roof of the Standard Motor Products building in Long Island City, just a few blocks from her home and RIF headquarters in Astoria. The roof of the old industrial building, located in a drab neighborhood of car dealerships and mechanics, was being converted into the Brooklyn Grange’s flagship urban farm.

“Hey!” she thought, “Not only is this amazing, it’s also really close by!” A few weeks later, after all the million pounds of engineered rooftop soil had been successfully delivered and the farm was underway, Blacque-Belair decided to visit.

“I went up to the roof and ran into [Brooklyn Grange head farmer and President] Ben Flanner, and I told him that it would be lovely to find a way to collaborate,” she says. “He’s so friendly. He said ‘Sure, that would be wonderful!’”

Blacque-Belair and the Brooklyn Grange staff developed a partnership in which RIF clients, many of whom are refugees fleeing political, sexual, or gender-based persecution in their home countries, visited the farm (which soon grew to include a second location in the Brooklyn Navy Yard) once a week, planting and harvesting alongside American trainees.

“The idea at the beginning was to have RIF’s clients go there mostly for therapeutic purposes,” Blacque-Belair explains, “to have an outdoor space, a friendly space, a way to be productive and think about something other than the stress of the asylum process.”

Three RIF participants began visiting the Brooklyn Grange that first season, escaping, for an afternoon each week, the off-the-books jobs, crowded homeless shelters, and frustrating legal dilemmas that constitute the daily experience of so many refugees struggling to get by in New York. The therapeutic benefits of being at the farm were so noticeable, it quickly dawned on Blacque-Belair to develop a broader urban agriculture training program, and in 2011 the Urban Farm Recovery Project was launched.

From April to October, RIF participants join Brooklyn Grange staff and interns once a week in raking beds, seeding, weeding, transplanting, composting, and harvesting, as well as guiding visitors and CSA members around the two farms. In this way, they contribute directly to the health and ecological resiliency of their adopted community. An entire program curriculum has been developed around environmental stewardship, nutrition, sustainability, small business management, and an overview of New York’s booming “green” economy, with the aim of preparing participants to enter the job market. To that end, the nearby Brooklyn Navy Yard Employment Center assists in offering free resume-writing and job interview workshops; many participants go on to find full-time work at the close of the season.

At the start of the season, however, they’re often withdrawn or uncomfortable around one another – they’re unsure of their English, the mental or physical anguish of the situations they’ve escaped from is still fresh, and they are adjusting to life in a new (and intimidating) city. Some are even skeptical of farming in general, viewing it as a backward, dead-end occupation. The gloom is especially palpable in gray, early April, before the last stubborn remnants of winter have dissipated.

After a few weeks, though, once the first salad greens have begun to sprout and the farms are blanketed in kale rather than snow, a new openness between the RIF refugees and their American counterparts begins to blossom.

“The best part about this project is that it’s designed to help these asylum seekers gain a better foothold,” says Brooklyn Navy Yard Farm Manager Matt Jefferson, a public health specialist and former Peace Corps volunteer turned urban farmer. “But at the end of the day, it’s amazing how many other people are impacted. There is a certain amount of cross-cultural exchange that goes on, and I think everybody in one way or another is affected by it.”

This intimacy between the Farm Project participants and Brooklyn Grange staff, made possible by the small size of the program, creates a family-like atmosphere that substitutes (as well as possible, at least) for the families left behind in Africa, Latin America, or the Caribbean. Any small victory on the long road to normalcy is a victory for the whole group.

Denise, an asylum seeker from the Democratic Republic of Congo, ran a non-profit organization that provided healthcare and psychological assistance to women and children victims of violence. Persecution forced her to flee, leaving her family and her work behind. For a year she lived in homeless shelters before finally securing a small apartment of her own; RIF and Brooklyn Grange staff have been busy gathering some household necessities like utensils, furniture, and linens.

Besides the family atmosphere provided by the program, the farm reminds Denise of the small garden she tended at her home in the DRC, and has helped ease the debilitating depression she experienced when she first arrived in New York. “I cried with joy when I saw it,” she tells me.

Looking to the future, Blacque-Belair hopes the Urban Farm Recovery Project can serve as a model program of social and economic integration for vulnerable refugee and immigrant populations. She also wishes to expand the program to accommodate more participants, and is developing support networks and ways of keeping the participants involved throughout the winter off-season, when the farms shut down and the cold weather rolls in. A fundraiser is planned for September in Long Island City, Queens, the proceeds of which will go towards continuing the program into 2015 and beyond.

However the project grows and develops in the coming years, the guiding principles of friendship, acceptance, and empowerment will remain the same.

“Something’s happening when we’re weeding together, or seeding a bed together,” says Alia Ornstein, the Brooklyn Grange’s Assistant Farm Manager and Director of Sales. “By the end of the season, we are friends and family.”

To learn more about the Refugee & Immigrant Fund and upcoming events, or to make a donation, visit www.rifnyc.org.