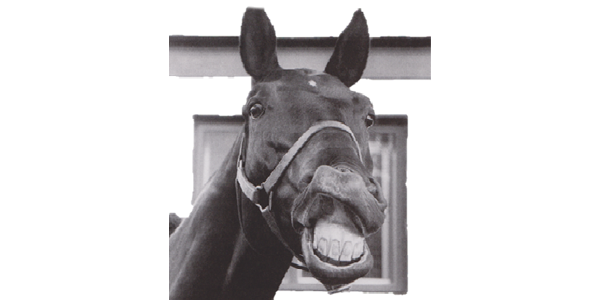 by Garry Leeson of Harmony, NS

You didn’t often see really old police horses on the streets of Toronto. The Department’s policy was to foster them out to good homes while they still had some useful years ahead. Because they were so quiet, safe and dependable there was always a long list of people anxious to adopt them.

When a horse faced early retirement because of a permanent injury or some other malady, placing the horse was more challenging. Officers and individual horses were often paired together for long periods of time and there were strong emotional attachments.

In 1963, during the first days of my time on the unit, I was witness to an emotional parting between PC Roy Cardy and his mount Peggy.

The mare had injured her fetlock and was no longer up to heavy work. It was a sad day for Roy but he consoled himself with the knowledge that his boss, Insp. Johnson, would make sure that Peggy would go to a good home.

Peggy was no beauty but she was the quietest, most dependable horse on the force. She was a dark bay, thick boned, with an oversized head and one droopy ear the tip of which had been accidently loped off.

When I left the job in 1968 to start my riding school I still kept an eye out for suitable remounts for Insp. Johnson.

On a cold winter day in 1971 I had made my way to the Toronto Stockyards on a horse buying mission.

Alec Stewart, an old time horse trader, kept his horses for sale in a few of the pens you first encountered as you entered through the main gates of The Ontario Stock Yards. The facility was comprised of about twenty acres of neat, orderly whitewashed pens separated by narrow cobbled alleyways all under a low roof that kept most of the place in a constant state of semi darkness.

Alec’s stalls benefited from the light from a bank of windows along an outside wall but if you ventured further in you were enveloped in the gloom of the place and bombarded by the cries of thousands of doomed cattle, sheep and pigs waiting their turn to enter the big centre isle were they would follow the Judas steer to the slaughterhouses on the north side of Keele St.

There were also pens that held horses that were destined for a similar fate but I tried not to think about them and seldom went to that area.

I must have been distracted and took a wrong turn while wandering through the alleys on that day because somehow I ended up in front of the pens that contained the meat horses. My first instinct was to turn and walk the other way but some weird compulsion drew me closer to the pens and I climbed the rails for a closer look.

The scene was what I expected; about a dozen dejected looking horses, mostly heavy draft animals in poor condition with heavy winter coats. There was very little color variation in the group, mostly blacks or dark bays. They stood with their heads hanging, puffing wisps of frozen vapor that rose and hung cloudlike over the pen.

Some were standing on three legs nursing old injuries while others hunkered back on their hind quarters to relieve the pressure on their foundered front feet. It was a sad scene but there was nothing I could do about it.

As I edged away I noticed one animal weaving in and out of the other animals then going over to the long manger and snatching a mouthful of hay.

I dropped down off the fence and was about to leave when the same animal came forward and hung its head over the top rail.

That’s when I noticed it; it hadn’t been visible at a distance but now I could see it. The right ear was not pointed like the left, it was shorter with a blunt straight top. I couldn’t believe my eyes.

I climbed back up and over the rail and dropped down beside her. After lifting her tail to assure myself I was dealing with a mare I grabbed hold of her halter and eased myself onto her back.

I pulled back gently and whispered, “Back, back,” and she responded immediately. When we were in the middle of the pen I moved her around, neck reining her in both directions, she turned without hesitation. Then I gave her the final test – halting her and restricting her forward motion. I applied my right leg to her flank – she did a perfect side passage to the left sweeping the other horses out of her way as she went. “Well shoot, it is you, Peggy old girl!” I said as I slid down off her back rubbing her eyes and making much of her.

The agent in charge was reluctant to do business with me because he said the whole group of horses had been spoken for, but he changed his mind when I offered him triple the going price.

As I led her over to my trailer I was pleased to see that she wasn’t limping or favoring her old injury. An hour later she was trucked into the safety of my stables.

The following afternoon, after spending most of the morning busy with curry combs, brushes, and my electric clippers I invited Insp. Johnson over telling him I had a new horse he might be interested in.

You couldn’t fool an old trooper like the Inspector.

When he saw Peggy, he immediately went to her head, reached up and caressed her chopped off ear then knelt down and felt for her injured fetlock.

As I explained how and where I had found her his face changed from a shocked white to an enraged red. I had never seen him angry before. Normally a mild mannered, big man, not given to swearing, he let loose with a flurry of expletives that would have made a sailor blush. Then he turned and marched purposely toward his office in the stable next to mine. I knew he was a man on a mission and I pitied the person who had betrayed his trust and sold Peggy down the river.

I never found out exactly how he handled the matter but I made darn sure that the home I subsequently found for Peggy was the very best. She enjoyed her remaining years serving as a companion animal to another retired mare on a farm north of the city until, many years later, she was finally laid to rest in an orchard next to her pasture.