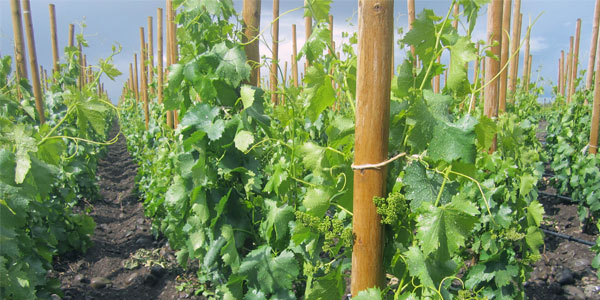 Milton-Freewater, Oregon is an understated town in almost every way. It’s flat, well-treed, and the main drag could be mistaken for Anytown, USA. That is, with the exception of Milton-Freewater’s signature frog sculptures that adorn many a street corner, reminding one that this humble town’s inhabitants take pride in where they live. At its core, Milton-Freewater is an agricultural town, and that’s where we leave the highway and head out past the packing sheds into the orchards and wheat fields.

There’s another crop, one which has begun to proliferate in recent years, which has displaced itself over increasing acreage with each passing vintage. It’s the wine grape, vitis vinifera. How did the grape find itself here on the outskirts of Milton? If you ask one man, Christophe Baron, the answer is simple. “It’s the cobblestone. (The ground) reminds me of home”. For Christophe, home refers to France and the stone littered earth from which many famous French wines grow. Hailing from a family of vigneron champenois, Mr. Baron came upon this corner of the state by chance, saw its signature geology, and decided to establish his domaine right here in northeast Oregon. Most any farmer might look at this ground and think it the antithesis of good growing land, but Mr. Baron saw great opportunity in these weedy fields and old orchards. Sixteen years after the first vine was planted, the name Cayuse Vineyards, now encompassing nearly 55 acres of mostly Syrah grapes, has become regarded as one of the premier producers in the Northwest and beyond.

Traveling around southeastern Washington and its borderlands with Oregon, vineyards are a common sight. However, Cayuse, named after an American Indian tribe native to the area, is typical of this landscape in only the most superficial ways. One of Cayuse’s unique features stems from the beliefs brought to the business by Christophe and his crew. Enter Efrain Meza and Christopher Galasso, jacks of many trades, and garden masters extraordinaire.

While producing exceptional wine is the business foundation of Cayuse, creating an environment of plant diversity and exceptional food is on par as a top tier priority. Rows of cabbage, garlic, peas, peppers, and tomatillos fill a large, fine tilthed parcel just a half mile from ‘the heart’ of Cayuse. “We want to bring organic food closer to our people”, Efrain says of their large, worker run garden, and there is a bounty to be had. The garden, unusually fecund for the middle of May, is conspicuously varied and colorful situated in this landscape. Its neatly tended rows of produce are cared for by volunteer squads of vineyard workers, organized by Efrain and Christopher. When the crops are ready to consume, Efrain distributes the produce in a CSA like manner to the 40 or so full time workers, ‘purchased’ with volunteership. The workers have a real interest in seeing the garden bear since they are its direct beneficiaries. A young latino man pounds reused vineyard stakes into the soft ground for trellising pea plants and by next month he will be eating its peas. That makes a lot of sense. “It’s a social statement. I want my people to know that good food is available to them. If you go to the store and want to buy Organic food, it’s expensive”, explains Christophe.

Asked about any special cultural practices, garden manager Christopher states that they try to employ biodynamics as much as possible. Cayuse Vineyards has been certified biodynamic, a sort of beyond organic set of cultural principles, since 2002, and that knowledge has transferred to the cultivation of annual crops as well. “We plant by the biodynamic calendar”, Efrain says, referring to the way in which moon phases, amongst other criteria, decide days of planting and harvesting. Doing so apparently has had a noticeable affect on the vigor and health of their crops. In a planting assay using (Cayuse?) oats, Efrain noticed that the seeds sown according to the Stella Natura calendar “had a certain richness of color. The stems were much stronger” than those planted out of synch, which bore grass with “spindly” stems. In the near future, they plan to spray with natural components made in accordance with biodynamic recipes to increase the health and nutrition of the crops, all part of the practice’s doctrine.

The Cayuse workers get more than fresh vegetables as a part of their food shares. Meat, milk, and eggs are also seasonally available from the farm’s herd of heritage livestock, including Limousin cattle and Katahdin sheep. Pork, beef, lamb, and chicken are welcome protein supplements to the garden’s bounty and apples and cherries help to fill the workers’ larders. “It closes the biodynamic circle by integrating animals into the farm, and shows respect for the old ways,” Christophe says, referencing his agricultural heritage.

Managing such a large plot of vegetables would be a very labor demanding task if it were done purely with handwork. Hoeing and raking is kept to a bare minimum through extensive use of Cayuse’s two American Belgian geldings, Red and Zeppo. Ernesto Avila and Andres Ambriz, Cayuse’s predominant horsemen, keep the garden well-cultivated. Most of the rows are spaced at thirty-two inches (81 cm), a distance they’ve found to work well with their equipment and general layout. Certain crops, such as peppers, get three feet (91.5 cm) of path space. The horses are worked singly, primarily utilizing the rugged French made Equivinum cultivation equipment they normally pull through the tight spacing of the vineyards. The equipment is extremely heavy duty, a necessary trait in the vines because of the heavy rock interference it encounters with every step. Each horse is outfitted with sturdy plow type harness, utilizing poly tube covered full chain traces and a coil-spring dampened singletree to help alleviate the strain of pulling implements through the rock strewn ground.

Red and Zeppo are kept extremely busy through various parts of the seasons, times when there’s ample garden and vineyard to cultivate. In asking the garden managers what ideas they have for the future, they would like the team to be used more in order to depend less on neighbors and their own petroleum powered equipment. Mowing, spraying, and broad tillage tasks top the list for desired duties. However, the geldings’ primary responsibility is to the maintenance of good vineyard health, where each vine of their eight and increasing horse worked acres is passed by an animal more than a dozen times in an average year.

“The stakes were a distraction at first, but they got used to it”, said Efrain when asked what sort of challenges the horses faced as they made Cayuse their home. And receiving the highest quality of shoeing and hoof care has been a priority as well, but is an issue complicated by the abundance of rocks each animal must negotiate in a typical workday. But overall, the investment in incorporating draft horses into the farm has been one well worth the effort. They are capable of cultivating the dense grape plantings, as tight as three feet across, and help create manure that’s composted and spread for increased fertility in the garden and vines. It’s the biodynamic way to close the loop, to create more fertility from within the farm, and to rely less on external inputs.

There’s another, more reverential reason to employ the horses. Christophe explained that horses were a common sight in French vineyards until the mid 1950s. Before that point in time, nearly every vineyard was cultivated with horses. They were an entrenched part of the agricultural landscape, traversing the slopes of the French countryside. Then a sharp generational shift occurred in favor of tractors, a story reminiscent of the transition here in the US. “I wanted to use horses to honor my grandfather”, Christophe explained, an emphatic nod to the traditional ways.

Back in the garden, green cabbages are heading up and pepper blossoms portend summer meals filled with the heat of Mexican chiles. Christopher and Efrain, like all farmers, chat about the weather, and they discuss the future here at Cayuse, which continues to expand its holdings, but doesn’t lose sight of its beginnings, its heritage. Christophe continues to set an example for what a business like his can look like. It can be respectful of the land and its workers, providing much more than just a paycheck at the end of the month. Is there any reason why more farms shouldn’t provide sustenance for its tenders? As Christophe says, great food and great wine go naturally together. To have one and not the other is, well, “inconceivable”.