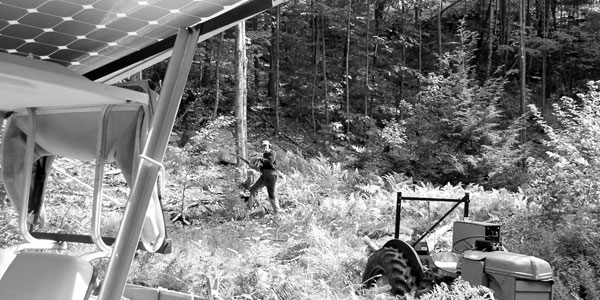 by Gail Geraghty of Waterford, ME

Ahh… the smell of gas and oil as wood chips fly from your chainsaw. For many, there’s nothing quite like the feeling of accomplishment in the sweat and labor it takes to cut your own wood to heat your own home.

Imagine, then, how good it would feel to eliminate the need for gas and oil, as well as much of the sweat and labor?

John Howe doesn’t need to imagine. He’s done it, by creating a firewood operation where the sole source of energy is the sun.

“This is fun,” said the retired mechanical engineer, as he navigates his solarpowered golf cart noiselessly down a tote road near his farmhouse on McIntire Road. “And even more important,” he said, “it’s the only way you can cut a tree in the woods without fossil energy which is beginning to run out.”

Arriving at the woodlot, he parks the cart in the sun so its on-board panel above can soak up even more energy than is already stored in its 10 KW hour battery pack which supplies a 2,500 watt, 120 volt inverter. He easily lifts his six-pound electric chainsaw and connects it to a 150 foot extension cord plugged in to the cart. The cord trails behind him as he walks into the woods and up a rise.

He pushes a switch with his thumb and the chainsaw roars, or more accurately, purrs to life. Within a minute the tree gives way, falling neatly.

Ok, right. So how’s he gonna get that tree outta there with a golf cart, you ask?

Enter one of his other inventions, a solar-electric 60-year-old Ford 8N tractor, “a real powerhouse,” he says with pride. Using a 6,000 pound FARMI winch attached to the tractor through a standard three-point hitch, he is able to winch the individual logs up to the tractor. The tractor than skids out three or four full-length trees at a time.

“That tractor will do anything. It’s the equivalent of 10 people working hard. Can you see the beauty in that?” said Howe.

Back at the woodshed, the same golf cart now powers the same saw to cut the logs to stove length. He does this by lifting the logs up to a gig, a cutting support, with an electric winch, so that Howe doesn’t have to cut on the ground and risk damage to the chainsaw blade or his back. Once the logs are cut to stove length, he swings over to a waist-high six-ton splitter and splits them down to firewood size. Nearby, the 60-year-old Ford 8N tractor recharges by being plugged into another tractor, a Farmall Cub, with a big four-panel array, which he also uses to power other electrical needs around the farm.

Howe has put up two cord so far this way. For him, showing how to process firewood without gasoline it’s as much a demonstration project as are the tractors, the golf cart, and even a solar-powered MG Midget he’s engineered.

“In Maine, we are in very, very serious trouble because we heat with oil,” said Howe, the author of three books on The End of Fossil Energy. “There’s so much baloney out there about other alternatives,” he said, “such as biofuel and hydrogen energy alternatives that ultimately are not sustainable. Solar electric is the way to go. If we don’t make use of it, we will absolutely fail as a society.”

“While by itself the sun is a very feeble, dilute and sporadic source of energy, it can be used to get the tree stands to the woodshed,” he said, “and by doing so preserve an ever-dwindling supply of fossil fuels that have stored energy for eons. The tree is the next best bet. At least Mother Nature, with the tree, has stored that energy up for 50 years.”

While his previous books have focused on the problem, his newest, in process, will focus on the solution, and include detailed descriptions of his projects including the solar-powered woodlot operation.