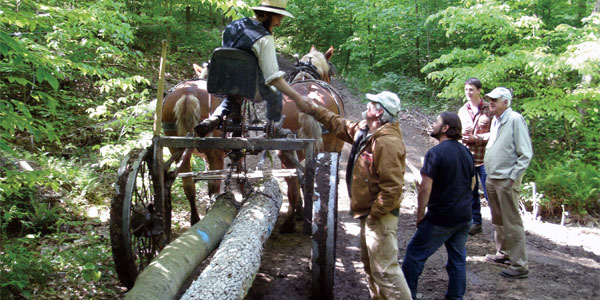 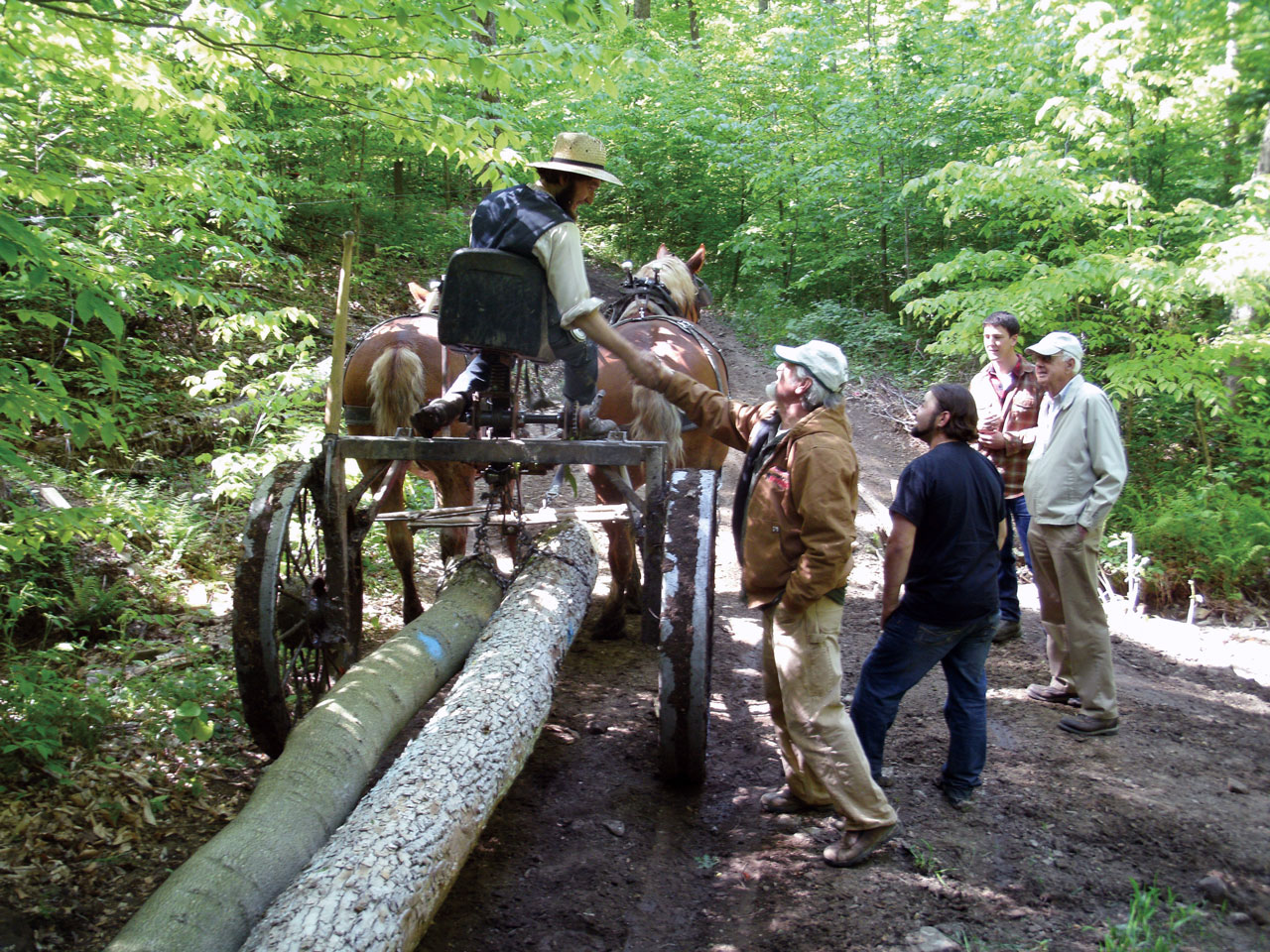 by Barbara Corson of Dauphin, PA

For the past 70 years or so, industrial agriculture has been increasing CO2 levels in our atmosphere, depleting our soil, building up toxins in our environment, wasting the remaining oil, and devastating farming communities economically. Obviously, we need alternatives to industrial agriculture and more importantly, we need alternative farmers, millions and millions of them.

A parallel situation exists in forestry. After 70 plus years of industrial logging, the world’s forests are as degraded and diminished as its farmlands, or by some estimates even more so. And this is a big problem for all of us, because the forests of the world do much more than supply lumber, Brazil nuts, and maple syrup. Farmlands produce food, a basic need to be sure, but forests are responsible for protecting and purifying the air, water and soil which are even more basic. People can’t live without forests and to put it even more strongly, there is no way to have a healthy planet Earth, without healthy forests. We need non-industrial forestry methods, and millions of people to practice them if we are going to have a livable future.

Thanks in large part to the long efforts of Small Farmers Journal and similar publications, there is increasing awareness of the problem of industrial agriculture, and, happily there are also people working on solving the problems of industrial forestry. In May 2012 I was lucky enough to attend a conference devoted to this theme.

The conference was held at Allegheny College in Meadville PA, in the northwest corner of Pennsylvania. Forest products like hard-wood lumber are an important part of the economy in this area, and in fact according to some references, Pennsylvania produces more hard wood lumber than any other state in the US. In spite of this statistic, or maybe because of it, forest land in Pennsylvania is in decline; losing ground to “development,” invasive plants and insects, and environmental changes. 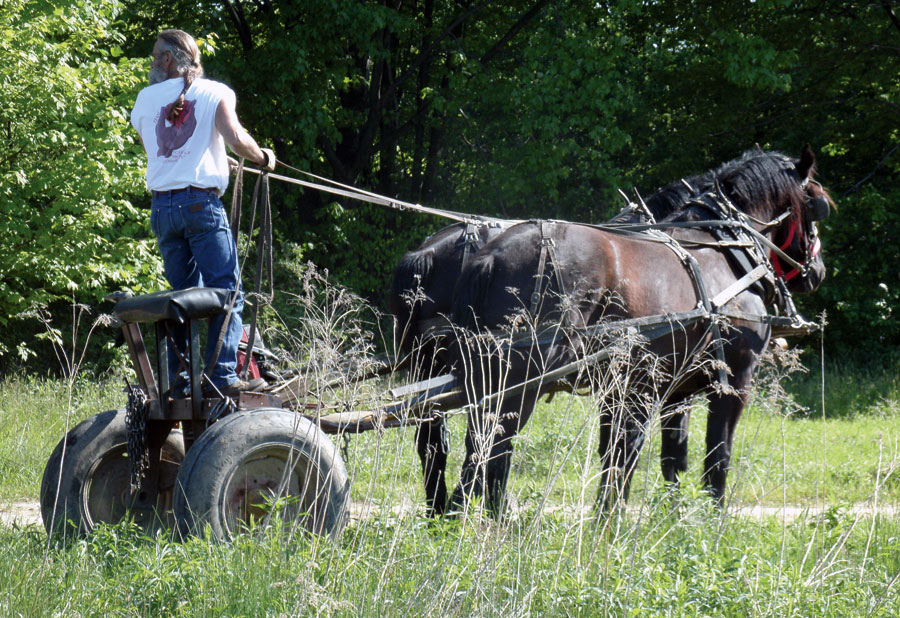 Local forest owners Troy and Lynn Firth were concerned about this trend, and in 2004 they started the Firth Family Foundation to protect and manage their timberlands in perpetuity. Realizing that there was a need for a broader conservation entity, the Firth family modified their foundation into the Foundation for Sustainable Forests in 2009. This non-profit organization is dedicated to forest preservation through sustainable forestry. As a land trust, the Foundation acquires forested land and manages it for ecosystem health, while at the same time supporting local jobs.

The conference in Meadville, called “Loving the Land through Working Forests” was the second annual conference hosted by the Foundation. The opening event, “A conversation with Wendell Berry” consisted of a reception followed by an auditorium presentation, and drew a standing-room-only crowd. For nearly two hours, the beloved author and ethicist engaged a panel and the audience in a discussion of forestry problems and potential solutions. The panel included Troy Firth of the FSF, Sarah Galloway (sustainability coordinator for the city of Erie), Terry Bensel (Allegheny College Environmental Studies), and Jim Finley PhD of Penn State University.

The second day of the conference consisted of a visit to a nearby wooded site currently being managed by the Foundation. Demonstrations of horse (and mule!) powered logging were ongoing throughout the day, with teamsters Ray and Bernie Blystone, and woodsman Patrick Maloney. In addition to the logging demonstrations, there were also several ‘concurrent sessions’ consisting of guided tours through the site. Session topics included “For the Birds” (management techniques that benefit birds and non-game wildlife) and “Reading the Understory” (using wildflowers and other understory plants to evaluate forest health).

The third concurrent session was called “Taking Hints from Nature.” This session was guided in part by Jason Rutledge, the president and founder of Healing Harvest Forest Foundation, based in Copper Hill, Virginia. Rutledge described forestry practices that set sustainable forestry apart from industrial logging and which are embraced by both HHFF and the FSF, including the following: 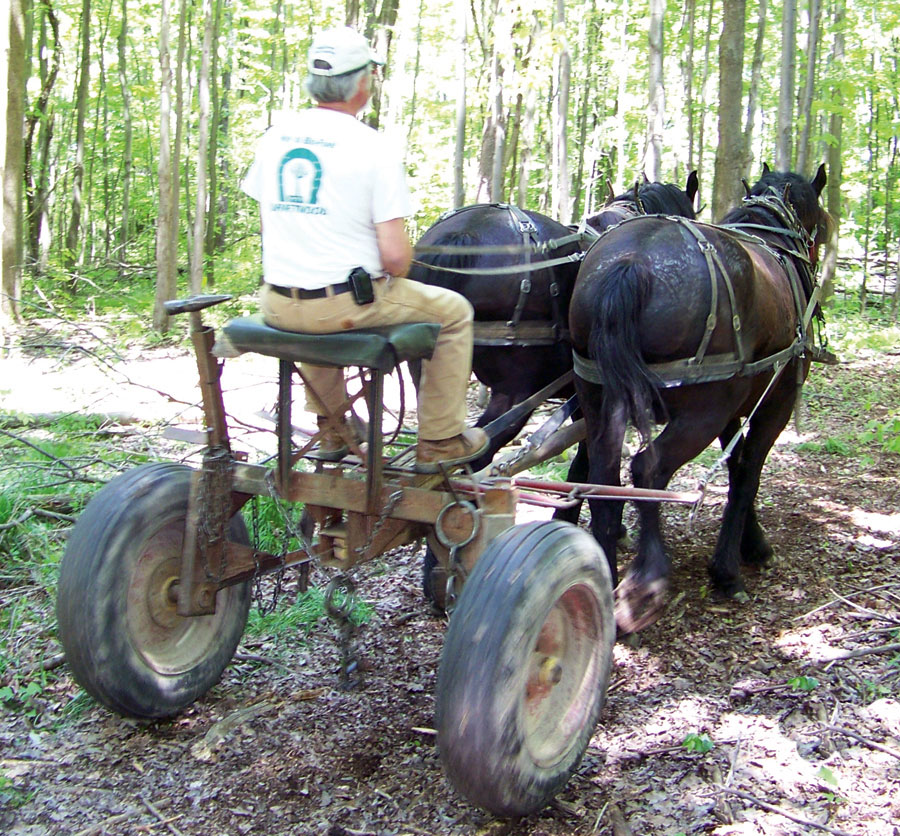 Of course using draft animals for power requires more skill than using ma- chines and the lack of skilled teamsters will be a limiting factor in efforts to create the millions of alternative foresters we will need in the future. A primary purpose of Rutledge’s non-profit HHFF is to address that problem through offering apprenticeships and private instruction in horse-powered logging. Rutledge calls his prote?ge?s “biological woodsmen” to emphasize their understanding of forest ecology and differentiate them from conventional loggers. Two of the woodsmen at the conference, Ray Blystone and Patrick Maloney, were former HHFF students.

Following the concurrent sessions on Saturday, participants gathered under a tent for a final discussion. I can’t say that we reached a definitive statement of how we should solve the problems facing us, but it was encouraging to see such a diverse group, including landowners and farmers, academicians, government representatives, and practicing horse-loggers gathered together with a common goal. There was a consensus that what FSF was doing was providing a great example and inspiration for many, especially those lucky enough to attend this wonderful conference. I know I will be looking forward to the third annual FSF conference as well as watching for more events like this to continue my education! Here are some references for those who may want to learn more: