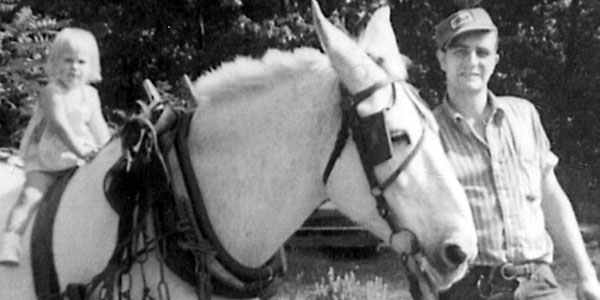 I soon found out that Whitey knew more about dragging pulpwood than I did. So, I quit driving him in the woods. I would drive him on the first drag and from then on I could turn him loose and he would take every drag to the first one. I would be cutting and limbing while he was on the way to the landing with his drag. If he got hung up on the way, he didn’t panic. I’ve watched him get hung on a stump. As soon as he realized he was hung, he’d swing right, if that didn’t work he’d try left. All this without being guided and me not even close. Working with an animal that smart it doesn’t take long to drag out a truckload of wood. 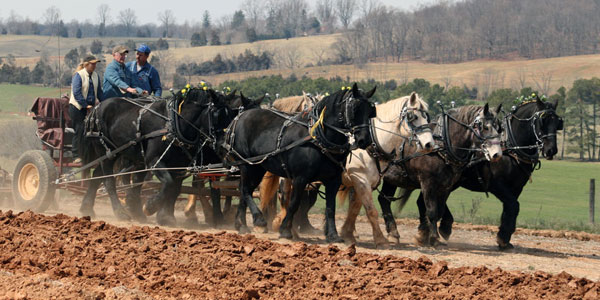 On Saturday, March 30, 2013 in Orange, Virginia, members of the Virginia Draft Horse and Mule Association (VDHMA), Old Dominion Draft Horse and Mule Association and Virginia Percheron Association trailered in to support Bob Brennan’s annual Farm Day. Other teamsters traveled from various parts of Virginia as well as North Carolina, West Virginia, Massachusetts and New York to demonstrate their skills in tilling a large field supplied by one of Bob’s neighbors for this public event. 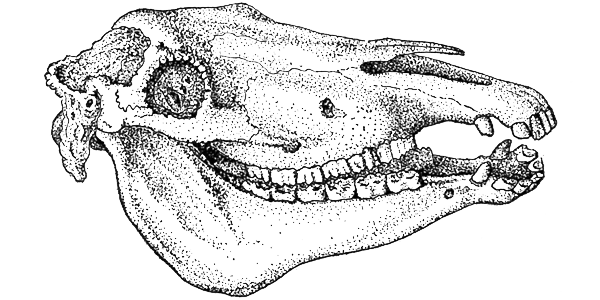 Determining the Age of Farm Animals by their Teeth

Establishing the age of farm animals through the appearance of the teeth is no new thing. The old saying, “Do not look a gift horse in the mouth,” is attributed to Saint Jerome, of the fifth century, who used this expression in one of his commentaries. Certainly for generations the appearance, development, and subsequent wear of the teeth has been recognized as a dependable means of judging approximately the age of animals. 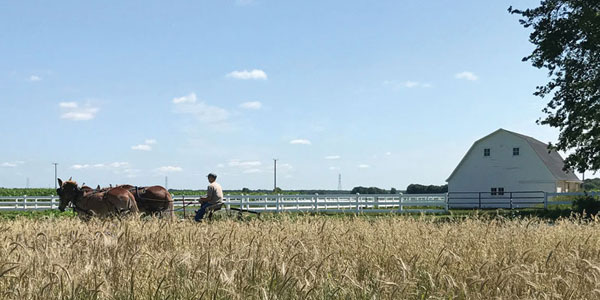 In Praise of Slowness

It is a ritual of sorts. I open the tack room door and take the pair of leather bridles down from the cast iron hook bolted to the pinewood wall and set them down within arm’s reach. Our two big mules, casually chewing their morning oats, quietly watch as I get things ready. I exit the barn for a few minutes to attend to some other tasks outside and when I return, these auburn colored drafts are standing stock still, side by side in their stall, patiently waiting to be harnessed. They know. 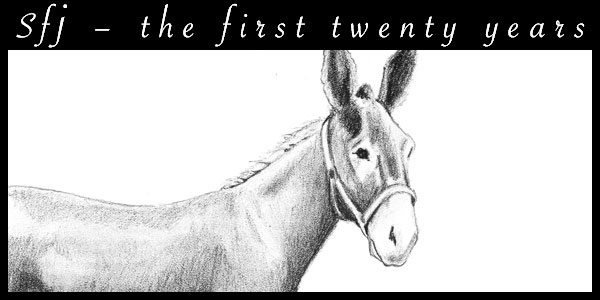 By the time he was 3 years old, Jacko had grown into a big size jack, 13 hands tall and 900 pounds, and was still growing. That summer he ran the singlerow corn planter and raked the hay, proved himself handier with a single row cultivator than a single ox, getting closer to the plants without stepping on them. Gradually he had paced himself to his three educated gaits to fill whatever job Lafe required of him: fast walk for the planter and rake, slow walk for the cultivator and plant-setter, and brisk trot for the buggy. 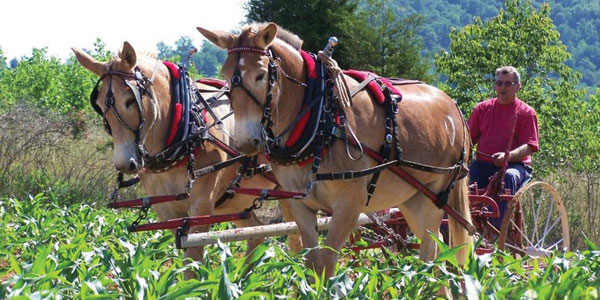 Maud was the name of one of the family mules that Paps held in very high esteem. The incredible feats of Paul Bunyan’s ‘Babe the Blue Ox’ paled in comparison to Pap’s stories about Maud. Maud was obedient. She responded to the quietest “Gee” and “Haw” and “Whoa, Maud.” Maud was a hard worker and would work for hours on end for the simple cost of a little oats or grass, a little kindness, and a good drink of water now and then. The pride Paps had in that mule – long dead by the time I arrived on the scene – rivaled the pride he showed for any grandchild. And Maud had earned that admiration. 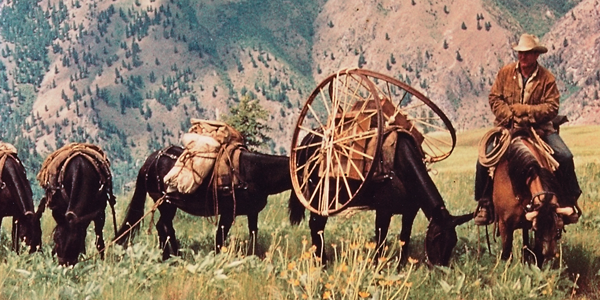 Jack vividly remembers working with his uncle in what is now the Selway/Bitterroot Wilderness in the early 1940s, breaking green colts for local ranchers in the spring and summer, packing hunters into the rugged mountains and then trailing the string of mules and horses from Paradise, Idaho, to winter pastures in Hot Springs, Montana, a three-day trip in late November, along gravel roads where cars were the exception not the rule. In a modern world where men have walked on the moon and even children now crawl the World-Wide Web from desktop computers, Jack has remained true to his early love – working with horses and mules. 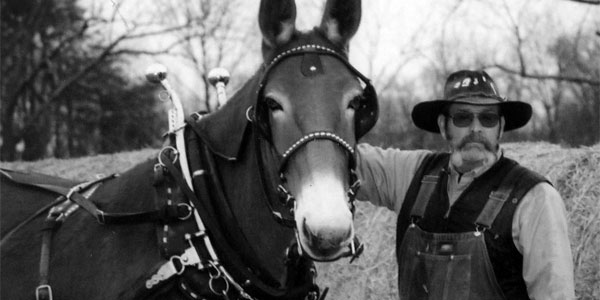 This will only add fuel to those late night discoursians about the relative merits of horses over mules or viciversy. Is the horse the smarter one for hitching a ride or is the mule the smarter one for recognizing the political opportunity which this all represents? In any event these boys know what they are doing, or should, so don’t try this at home without horse tranquilizers. Remember that politics is a luke warm bowl of thin soup. 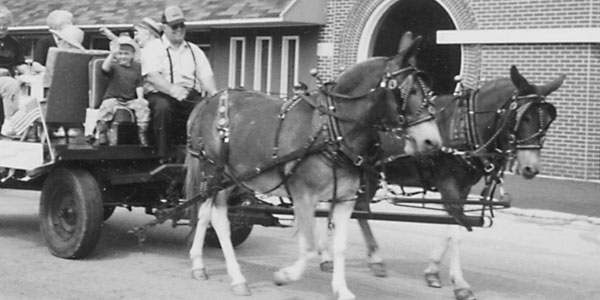 The main object, or is supposed to be, of this letter, is to reply to the article on page 66 of Winter 2002 issue of SFJ on “The Reluctant Mule.” I agree with your statement “we do not agree with this article.” I would go a bit farther than Justin E. Miller’s statement. If the man said that about my span of mules I would put him in the middle of a 3-abreast hitch hooked to a plow and lay on the whip to the one in the middle. 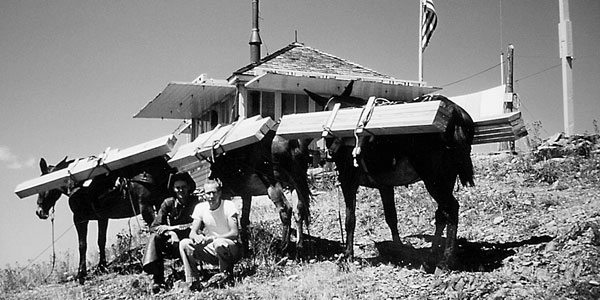 Forty-four years ago I was employed as a mule packer for the US Forest Service. At this time the Forest Service maintained pack mules for packing supplies and food to fire lookout towers, trail maintenance crews, bridge and trail construction and packing supplies for fire fighting crews. I was stationed at the Fish Lake Remount Station on the Clear Lake cutoff road of the Santiam Highway west of Sisters, Oregon. 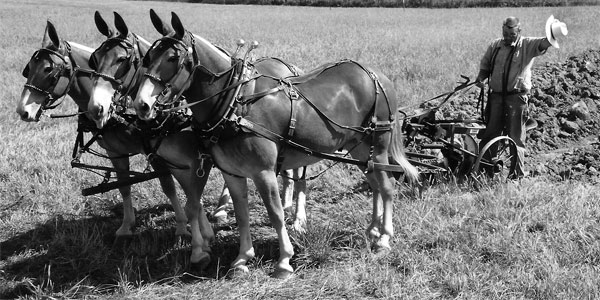 There is no more useful or willing animal than the Mule. And perhaps there is no other animal so much abused, or so little cared for. Popular opinion of his nature has not been favorable; and he has had to plod and work through life against the prejudices of the ignorant. Still, he has been the great friend of man, in war and in peace serving him well and faithfully. If he could tell man what he most needed it would be kind treatment. 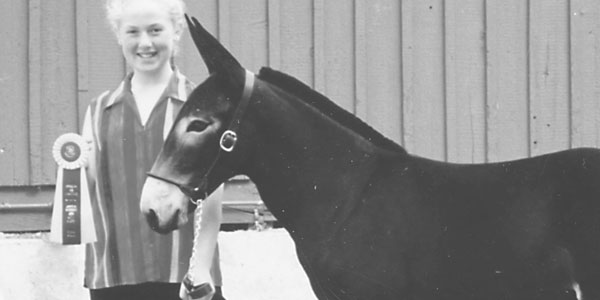 A few years back we traded John and Twinka Lupher a lovely bay filly, out of our Belgian stallion, for rebuilding our old corral. Twinka bred Betsy (above) to a Jack and they got a beautiful mule foal they named “Hubcap”.