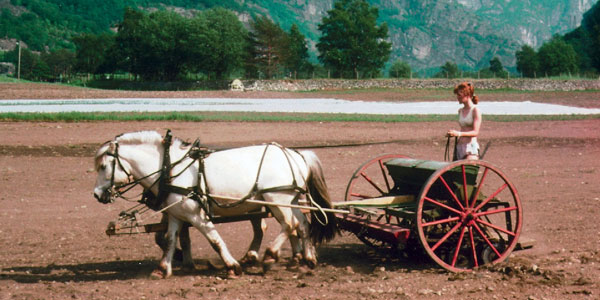 In the eastern part of the country rolling hills and wide valleys form the landscape. In this area the farms are a lot bigger than the average Norwegian farm of 25 acres. Grains and potatoes are mainly grown in this region. In the west mountains, lakes and fjords dominate the landscape. The farms are small and often situated on steep hills. Milk production is dominant in this area, with milking goats where the land is too steep for cows to graze. Until the end of the 50s the majority of the farms were powered with horses. Fifteen years later tractors had almost completely replaced the workhorse. Today most of the workhorses can be found on smaller farms and in the mountains.