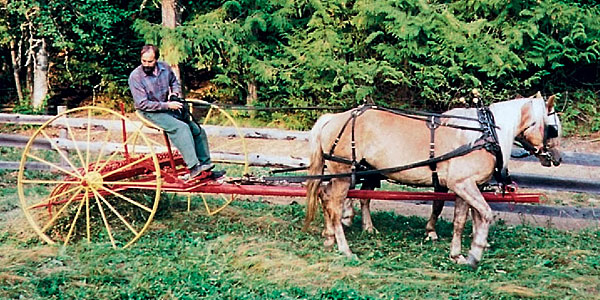 The Horse of the Alps Comes West

by the Western Haflinger Association

The Haflinger horse is often mistaken for other breeds by people unfamiliar with them: it must be a “baby Belgian” or better yet “a freeze-dried Belgian – just add water.” Their size and build brings to mind the Norwegian Fjord, but their coloring differs considerably. We’ve been asked if the name meant that the Haflinger is “half a horse” or “where are the quarterlingers and the wholingers?” We enjoy the guessing game particularly because once someone has met a Haflinger, or better yet, has seen one work, they will never forget this powerful little horse.

The reality is that the Haflinger is not “half” of anything, but rather named for the village of Hafling where the breed developed in the Southern Tyrolean mountains, and has been considered a breed native to Austria for centuries. The mountain ponies that served the farming peasants in that challenging environment were particularly strong and tough, subsisting on extremely sparse forage, and thriving in the worst of winter weather. These early Haflingers were all-purpose workers for their farm families, providing transportation, pulling power, packing, milk, and dependable quiet companionship. The Haflinger had to do it all.

Small amounts of Arabian blood introduced refinement and height, creating the “modern” Haflinger. The foundation stallion “Folie” was born in 1874, out of a Tyrolean mare and an Arab sire. The subsequent generations of Haflingers continued to work the mountainsides as the “tractor of the Alps” and when the World Wars came to Austria, the Haflinger was called to action as a pack horse in the most challenging and difficult fronts in Russia and elsewhere.

The Haflinger still works in Austria, and is quite popular in Germany and Holland as well. They are used for all types of activities, including dressage, pleasure driving, jumping, and packing, but the traditional role of the farm work horse has never been lost. Nor has the Haflinger temperament been lost – this horse is an eager and willing worker, quick to learn, quicker to forgive, and always seeking out human companionship.

Haflingers are distinctive for their coloring: a chestnut coat ranging from blonde to chocolate, with heavy light or white mane and tail. Their height ranges from 13.2 to 14.3 hands, with weight from 800 to 1,200 lbs. They ideally have a lean, noble, and intelligent face, with and inquisitive and friendly expression, a beautiful eye outlined by black eyelids, and often white stars or stripes. They have a deceptively long stride for such a small horse – they cover ground easily and with great endurance. They also have an incredible “engine” – powerful, muscular hindquarters – which is why the Haflinger is referred to as “a prince in front, a peasant behind.” No wonder the Haflinger is now being discovered in North America, and no where more rapidly than the west coast.

Ironically, one of the first importations of Haflingers from Austria to North America was in the early 1960’s to Washington state, by the Heisdorf and Nelson Company. This herd was dispersed a number of years later into Canada and Montana, with many of them now unaccounted for, but some descendants of these original imports are still found on some west coast breeding farms. Haflingers became virtually unknown in the west until several breeders in western Canada purchased Haflingers in the late 1970’s. Washington and Oregon did not have registered Haflingers again until the mid ’80s. Now the number of owners and breeders is markedly growing, with over 100 owners on the west coast from Alaska to southern California. Over 350 registered Haflingers are thought to be living west of the Rockies, up from barely 100 only five years ago.

West coast Haflingers are serving their families with great versatility. In Alaska, they are packing and transportation horses in the most remote regions. In northern British Columbia, they are the mounts and packers for hunting outfitters. In the Okanogan region of middle British Columbia, they have been the school horses for a summer riding academy, attracting students from all over the world. In the Cariboo country of eastern British Columbia, they are the family farm horses, doing the field work, skidding logs and packing the back country. In the lower mainland of British Columbia, they are competing successfully in riding and driving competitions with many other breeds. In Alberta, they are winning in western pleasure and reining competitions. In Washington, they are providing sleigh and carriage rides for tourists, winning in dressage and jumping shows, doing 4-H and pony club, as well as cowpenning and 30 mile trail rides in the mountains. In Oregon, they are in parades, participating in poker rides and wagon trains, pulling carriages for weddings, competing in draft show exhibitions, and in combined driving events. In California, they have been in the Rose Bowl Parade, and have been mounts in a therapeutic riding school. It is hard to find any other horse breed that has been able to find its niche, no matter who owns it.

The Western Haflinger Association, a promotional breed organization, was organized in 1993 by a handful of west coast Haflinger owners to improve communication for sharing news and information, and to help “get the word out” about our horses. Starting with a core of 13 farms, the association now has over 100 farm members up and down the coast. We host an annual meeting each summer, and are finding many “public” opportunities to exhibit and demonstrate the Haflinger’s uniqueness, at fairs, breed exhibitions, and open shows.

Our most recent meeting took place in September at the Mason County Fairgrounds in Shelton, Washington, with over 40 Haflingers and their owners in attendance for two very wet, rainy days. In spite of the less than perfect weather, the enthusiasm of horses and owners was never dampened. There were ongoing demonstrations of draft and light harness driving, English and Western riding events, trail rides and lots of good old fashioned visiting. We plan to meet in Canada next year, and are hoping to organize an all-Haflinger show and sale on the west coast in the future.

Many of us learned about the Haflinger because we first read about the breed in two articles published in the Small Farmer’s Journal. A number of us were attracted to the Haflinger because the breed offered all the advantages of a draft horse in a smaller package, fitting our acreage or our ability to lift a harness. Many Haflinger owners had decided to switch from draft horses to Haflingers in their “retirement”, still wanting a team to work and drive, but not up to the large horses anymore. No matter what brings a person to a Haflinger, the truth is it is hard to turn back – these horses love their people as much as the people love their horses. And that, ultimately, is what it is all about.

For more information about the Haflinger horse: