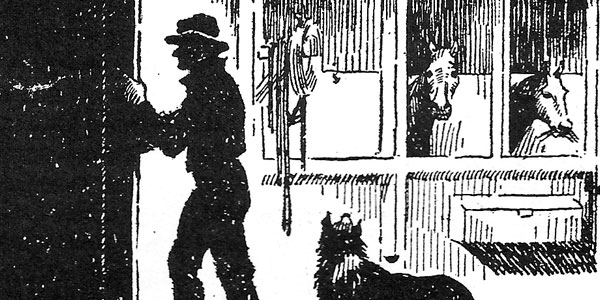 It is light tan or blond in color; light and flaky in texture; mild in both scent and flavor; all in all quite palatable. In action it has by long tradition been credited with a variety of cures and preventions. And although its popularity as an equine health panacea may be slightly on the wane, many still consider it to be virtually a “cure-all” dietary health aide for humans, according to some nutritionists who advise adding it to all meals.

What is this fascinating, all-purpose, apparently healthy substance? Bran – or, the hull covering a cereal grain. It can be milled from corn, rice or whatever, but among horsepeople wheat bran is considered to be the highest in protein and quality. Thus, it is the one most often sold in feed stores, and it is the one discussed here.

Several hundred years ago, when man learned how to mill and separate the wheat hull from the kernel, he used the inside for the production of white flour for his own consumption, and fed the hull to his animals. This leftover substance was fed as either a part of the daily ration, as an occasional supplement, or (too frequently) as the whole meal itself.

Bran’s best known role was back in the times when horses worked all day, six days a week, and then stood in a tie stall all day the seventh. A bran mash on Sunday evening was purported to prevent azoturia (also called Monday Morning Disease or Blackwater Disease) when work resumed the next day.

Although azoturia is relatively rare in these days of more pasture, less equine work, and large box stalls, the tradition of feeding day-off bran mashes has persisted – although for different reasons. Most modern horsepeople feel that bran is a natural laxative, and this once-a-week feeding gives the horse a good cleaning out and colon conditioning.

However, according to Dr. Thomas J. Lane, extension veterinarian at the University of Florida Veterinary College, “Bran does not have a laxative effect. As a matter of fact, it is bulky and poorly digested.” Dr. Lane goes on to explain that bran increases the amount of feces passed because of its bulk. It does, however, help prevent fecal impaction by increasing the horse’s water intake, and retaining more of that fluid in the fecal material, thus aiding the waste material in its passage through the bowel; “particularly beneficial in winter months.”

To produce this result it is not necessary for the bran to be fed as a mash, according to vets at the Equine Research Department of Cornell University. Bran works equally well fed with or without added water. They explain that the animal will drink sufficient amounts to make it work. Therefore, deciding in which manner to feed the substance may be left entirely up to whichever the owner or individual horse prefers.

Owners may discover one problem when feeding dry bran, however. The light, flaky material tends to blow about with the horse’s natural respiration as he eats. It, in fact, may even fly up into the nostrils, irritating and causing the animal to blow, which could be one of the main reasons people began feeding it as mash.

A viable alternative to feeding straight bran is substituting one-half to three-quarters of the horse’s regular grain or pelleted ration with bran once or twice a week. Many owners will also feed hay alongside or increase the evening hay ration that day to “help the bran work.”

Today certain beliefs about feeding bran still exist. Many horse owners swear they could not prevent their animals from colicking without branning them (especially southern horsepeople who must contend with sandy soil and the resultant vicious “sand” colic).

However, most veterinarians agree that there is no proof that feeding bran will prevent colic – sand or otherwise. “But,” added Dr. Lane, “neither is there evidence that colic is not prevented by the use of bran.”

What then, if any, is the benefit of bran, other than possible colic prevention?

Nutritionally, bran is a fairly good feed. It provides approximately 16% protein, and is higher in phosphorus than most other grains. This is probably the reason that many commercially mixed feeds include from 7 to 12% of it. Commonly feed supplements also are high in bran, as it is considered to be a good “fattener.”

Feeding bran alone, however, is apparently not practical. Dr. Lane explains, “on a weight basis … corn and wheat supply four times the energy, and oats supply twice the energy as an equal volume of bran.”

Recently the feeding of once or twice weekly bran mashes has begun falling into some disuse as a slowly growing number of horsepeople have taken to adding a small amount to each feeding. Some do this feeling that it helps the horse eliminate the sand and other impurities as they ingest it, rather than giving a once-a-week cleaning (which they claim is often incomplete), while others say that adding bran daily allows them to safely feed an excessively high protein ration.

Research at Cornell has shown, however, that bran’s effect “will not hold up in continuous daily use.”

Most horsepeople have heard tales of horses being overfed on bran and virtually eliminating themselves to death. According to the vets this, specifically, is not a possible problem. But can bran be overdosed?

Feeding a regular diet heavy in bran can cause an excessive phosphorus consumption, with a secondary calcium deficiency. The resulting mineral imbalance is properly titled “Osteodystrophia Fibrosa”; but is also called by such diverse names as Bran Disease, Big Head, and Miller’s Disease. Technically it occurs as a result of excessive secretion of parathyroid hormone caused by the mineral imbalance.

Principally a condition of equidae (although it may occasionally happen in other species) this disease generally begins with a shifting, nonspecific lameness. It slowly develops to affect the entire body skeleton, a general thickening. As this is most noticeable in the face and cranial area the term “Big Head” was used.

This “defective mineralization” of the bones was far more prevalent in years past when (primarily) work horses were fed a diet consisting of bran and cereal hay (both substances being plentiful and reasonable in price, and as such, favored as horse feed). Today “Osteodystrophia Fibrosa” is far less common due to a more complete understanding of equine nutritional requirements, a lessening of the importance of bran as a main feed, a more common use of legume hays, and the availability of vitamin and mineral supplements.

But, unfortunately, the condition is still not totally unheard of. It occurs occasionally, usually in horses fed cereal hays and grain – both low in calcium. Very likely the owners of such animals feed just oats or buy and mix the various grains themselves, for the majority of commercially mixed feeds include calcium (along with various other vitamin and mineral) supplements and frequently legume meal. However, for the owner who still prefers to mix his own or who lives in an area where legume hays are expensive or difficult to buy, alfalfa pellets and feed/mineral supplements are sold in most feed stores. Basically, as long as the individual equine is fed a well-balanced diet and suffers from no mineral absorption problem, the owner need not worry about Bran Disease.

If, however, a horse does show symptoms, the treatment is simple. Correct the existing nutritional imbalance. Feeding legume hay or a supplement such a finely ground limestone or calcium carbonate is best. Some veterinarians will also recommend the use of injectable vitamin A and D.

So, is bran a solution or a waste of time and money?

It’s definitely not the latter, agree most horsepeople and veterinarians. It is nutritious and can be important in the prevention of fecal impaction. Most vets will prescribe a bran mash for horses recovering from colic. And, besides, most horses consider it to be a treat.