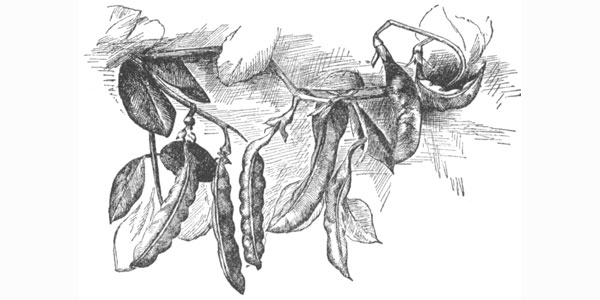 by Stephen Bishop of Shelby, NC

The war between my two farming mentors, Lowry and Tightwood, had escalated since the Canadian Thistle Crisis. Now the men were inspecting Lowry’s just-planted pea patch and arguing over the origins of mere pigweed. Lowry thought our local pigweed variety originated on Tightwood’s farm. Tightwood asserted biblical origins: “It’s in the Good Book. When the Good Lord cast the demons into the pig herd, some got confused and thought he said pigweed. That’s why pigweed is so devilish.”

“What Bible you been reading?” asked Lowry.

“I can’t quote chapter and verse, but it’s in there somewhere,” said Tightwood. “It says so in the Farmer’s Almanac joke section.”

“You and that Farmer’s Almanac – it ain’t worth the paper it’s printed on. All that lunar voodoo and aquarian hogwash is why your garden never makes.”

“And all that Sevin dust is why your hair is falling out.”

Lowry’s face was blinking red alert. I could tell he wanted to lob Tightwood back to his iron curtain of a farm. Across the hill, Tightwood grew two things well: crowder peas and rust (come to think of it, three things if you count pigweed – and four for Canadian Thistles). Despite the weedy appearance, Tightwood’s farm was where worn-out tractors went to rest, relax, and work on their patina in the sun. Most liked the place so much they stayed forever, or at least until they disintegrated. Amid the overgrown junk, Tightwood planted a pitiful garden that produced a heaping bounty of earworms, hornworms, stink bugs, spider mites, cabbage loopers, army worms, and aphids. The crawling cornucopia graciously saved Tightwood a scrawny tomato or two.

Tightwood never cared much for working his garden or, really, working. Still, he prided himself on growing his family’s heirloom crowder peas. For generations, his family had collected and saved pea seed from the most productive plants. Tightwood carried on the tradition, mostly to spite Lowry whose run-of-the-mill crowder peas never compared in size or heft to the lead shot grown in Tightwood’s pods (a fact which Lowry attributed to the rust in Tightwood’s soil). Related to the black eye and purple hull, the crowder pea was a local summer delicacy. Some thought the pea was named for Crowder’s Mountain. Others believed the name came from the fact that the large peas “crowded” the pod. Round instead of oblong, crowder peas made excellent projectiles for large gauge pea shooters, once contributing to their popularity among boys working the second-grade dating pool.

Still debating the spread of pigweed, Lowry started brandishing a hoe at Tightwood. To de-escalate the theological discussion, I attempted to restart the peace process before the two started slinging mud. It always pained me to see my two mentors feuding, especially if I had to show my wife the collateral mud splatter on my clothes.

“Just think, if y’all ever joined forces,” I said. “You might have a real shot at winning the blue ribbon for crowder peas.” At the county fair, the crowder pea blue ribbon had always eluded Lowry.

“How do you figure?” asked Lowry

“With your gardening skills and his heirloom seed, you could work together to beat Myron Milfoil.”

“Milfoil is a cheat, plain and simple,” said Lowry. “He enters those black-market peas injected with pea filler.”

“That’s why y’all need to work together to beat him. You could split the cash prize. You could even get your photo in the newspaper.”

A newspaper article appealed to Lowry’s desire for gardening glory. Meanwhile, Tightwood was hooked on the cash prize and negotiated a fifty-fifty split for the five dollars. This was the only point of agreement, and the peace process quickly stalled. Only after days of diplomacy did both men agree to a summit to further negotiate terms. The location of the summit was a strip of contested land between the two neighbors, which I figured would be a good location for a joint pea-patch. However, this location was possibly a mistake. Both men arrived with a battalion of tractors as a show of force, and I feared the strip might get plowed to smithereens.

Negotiations were grueling. Lowry sought control of plowing, ground preparation, planting, fertilization, weeding, watering, and harvesting – basically everything. Since the seeds were his family heirloom, Tightwood wanted to control planting. Furthermore, he would only plant by the recommendations set forth in the Farmer’s Almanac. The almanac said to plant on the night of the new moon, the darkest night of the month. On hearing this, Lowry nearly walked away from the tailgate. But I convinced Lowry that if he prepared the ground beforehand, then Tightwood could plant the peas at night by himself. Lowry wouldn’t need to participate in any “lunar voodoo” or “aquarian hogwash.” Lowry agreed, but only if his name was listed first in the newspaper article. Tightwood acquiesced, stating “that good-for-nothing gossip rag ain’t worth wiping your Allis-Chalmers with.” Thus, the Crowder Pea Peace Treaty was struck. I recorded the stipulations and drafted the official document. I used a lot of formal language, like herebys and therefores, to lend an air of dignity to the document, which, having been written on the undulating liner of the tailgate, looked as if a first grader withdrawing from chocolate milk had produced it.

In my capacity as official treaty peacekeeper, I ensured both men abided by the rules set forth. Lowry eagerly upheld his end of the bargain, pulverizing the ground to a fine fluff and staking off neat rows. Down each row he laid open a small furrow for Tightwood to drop peas into. On the night of the new moon, I met Tightwood to inspect his contribution. To my surprise, he had already planted the peas and had just finished raking soil back over the last furrow.

“Where’s your flashlight?” I asked, shining my light in Tightwood’s face. I saw a bead of sweat glisten on his forehead. Tightwood had actually been working hard enough to sweat.

“Batteries were dead. Now get that light out of my face before you blind me.”

“See? I don’t need to see. I know every square inch of this farm like the back of my hand.” To the general bystander, Tightwood’s farm may have looked disheveled, disorganized, and destroyed by a bomb blast, but Tightwood always prided himself on remembering where everything was located. “My mind is a steel trap,” he said.

“And so is your farm,” I said, chuckling.

“Now don’t you be learning bad habits from Lowry.”

“I’m actually surprised in you, Tighty,” I said, “for finally working with Lowry for once.”

“I know. I’m disappointed in myself, too.” said Tightwood.

Despite what he said, I could tell Tightwood was proud of his contribution as he left and stumbled through the darkness to his house. Admittedly, I too had a twinge of vanity creep in when I imagined myself with the Nobel Peace Prize.

However, with each passing day, that dream faded. After a week, not a single pea had sprouted, despite Lowry’s diligent watering. I called the county agent to come assess the situation. With Lowry, Tightwood, and I nervously watching, the county agent started stabbing in the furrow with a pocketknife. He dug little holes like a crow. Then he scooped up a handful of dirt and brought it inches beneath his eyeballs to study it.

“Marbles,” the county agent said, “a whole line of marbles in the furrow, like someone planted them.”

“Well that explains that,” said Tightwood, moving out of arms’ reach of Lowry. “I wondered what happened to that jar of marbles. It was in the shed in the same box as my other family heirlooms and the jar of pea seed. It was so dark I must have grabbed the wrong jar.” “You numbskull,” Lowry said, “I ought to bury you in a furrow.” Lowry’s face was again blinking red alert. Tightwood suddenly remembered he was late for a dentist appointment.

After this, the peace process stalled again. The county agent was the biggest gossip in town. It wasn’t long until a local newspaper reporter arrived to investigate the incident. I tried to cheer Lowry up by pointing out that he made the paper, which was his goal. But he seemed generally displeased with the headline FARMERS PLANT LOST MARBLES. His only consolation was that the Crowder Pea Peace Treaty was off. He could now upgrade his old dairy silo’s missile capabilities.