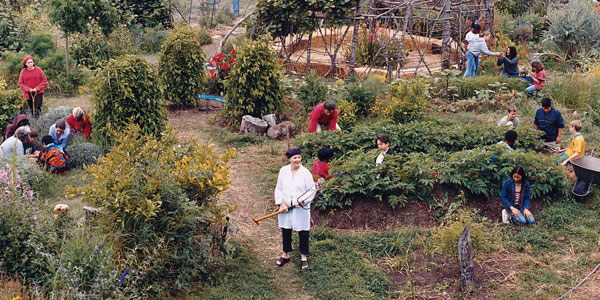 by Alice Waters (from a talk delivered at the Slow Food International Congress, Naples, Italy, October 2000)

For me life is given meaning and beauty by the daily ritual of the table — a ritual that can express tradition, character, sustainability, and diversity. These are some of the values that I learned almost unconsciously at my family table as a child. But what beliefs and values do today’s children learn at the table? And at whose table do they dine?

The family meal has undergone a steady devaluation from its one time role at the center of human life, when it was the daily enactment of shared necessity and ritualized cooperation. Today, as never before in history, the meals of children are likely to have been cooked by strangers, to consist of highly processed foods that are produced far away, and are likely to be taken casually, greedily, in haste, and, all too often, alone.

I believe public education must help restore the daily ritual of the table in all our childrens’ lives. Public education has the required democratic reach. And it desperately needs a curriculum that offers alternatives to the fast-food messages that saturate our contemporary culture. These messages tell us that food is cheap and abundant. That abundance is permanent; that resources are infinite; that it’s okay to waste; that standardization is more important than quality; and that speed is a virtue above all others.

Fast-food values are pervasive (especially in poor communities) and often where they least belong. Recently I visited a museum of natural history, for example, which celebrates the astonishing diversity of world cultures, the beauty of human workmanship, and the wonders of nature. It even houses an impressive collection of artifacts relating to food: tools and depictions of hunting, foraging, agriculture, food preparation, and the hearth.

But in the museum cafeteria, crowds of people queue up in a poorly lit, depressing space as if in a diorama of late-twentieth century life, surrounded by that unmistakable steam table smell of pre-cooked, portion-controlled food. In this marvelous museum, surrounded on all sides by splendid exhibits that celebrate the complexity of life and the diversity of human achievement, people appear to have stopped thinking when it comes to their very own everyday experience. People appear to be oblivious that the cafeteria represents the antitheses of the values celebrated in the museum.

Yet a museum cafeteria could have delighted the senses. It could have been beautiful and made you think. It could have served delicious meals in ways that teach where food comes from and how it is made. And when you returned your tray you could have learned something about composting and recycling.

You could even have a little friendly human interaction, had the cafeteria been designed to encourage it. It could have inspired you to head out of the museum and see the world in a different way. Instead it was like a filling station.

Our system of public education operates in the same strange, no-context zone of hollow fast-food values. Maurice Holt, professor emeritus of the University of Colorado, has observed that public education today has little tradition and character. In school cafeterias, students learn how little we care about the way they nourish themselves — we’ve sold them to the lowest bidder. Soda machines line the hallways. At best we serve them government-subsidized agricultural surplus, at worst we invite fast-food restaurants to open on school grounds. Children need only compare the slickness of the nearest mall to the condition of their school and the quality of its library to learn that they are more important as consumers than as students.

What we need is a systematic overhaul of education inspired by the International Slow Food movement. This eco-gastronomic movement celebrates diversity, tradition, and character and what its founder, Carlo Petrini, calls “quiet material pleasure.” This is exactly what Maurice Holt has proposed. “Slow Schools” would promote community by allowing room for discovery and room for paying attention. Concentration and judgment and all the other slow food values that testing cannot measure would be given a chance to flourish.

How do we begin to turn the public schools into slow schools? The Edible Schoolyard at the Martin Luther King, Jr. Middle School, in Berkeley, California, provides a hopeful model. King School is a public school with about 1,000 students in the sixth, seventh, and eighth grades. It is an astonishingly diverse group, socially, economically, and culturally — over twenty languages are spoken in the students’ homes. A decade ago, this school was surrounded by large schoolyard covered with blacktop. The school’s cafeteria had been closed because it was no longer large enough to accommodate all the students. Microwaved, packaged food was sold from a shack at the end of the parking lot.

Members of the community, dismayed by the state of the school, began speaking with other parents and teachers. We noticed that the blacktop schoolyard was large enough for an enormous garden and talked about initiating an edible landscape. We suggested that the students could plant and care for a garden and even learn to cook, serve, and sit down and eat together in a renovated cafeteria and lunchroom. These ideas would have been nothing more than well-intentioned fantasies had King School not had an enlightened principal. He understood that a new school garden and a renovated cafeteria and lunchroom meant more than just the beautification of school grounds. He understood that these were the central elements of a revolution in both the lunch program and the entire school curriculum.

Presently the Edible Schoolyard consists of a one-acre organic garden and a kitchen-classroom. In the garden, students are involved in all aspects of planting and cultivation; and in the kitchen-classroom, they prepare, serve, and eat food, some of which they have grown themselves. These activities are woven into the curriculum and are part of the school day. A new ecologically designed cafeteria is being built and the program is preparing for the transformation of the school lunch program. When the cafeteria has been built, lunch will be an everyday, hands-on experience and an essential part of the life of the school.

Such a curriculum is not a new idea in education. Waldorf schools and Montessori schools, among others, practice similar experiential, value-oriented approaches to learning based on participation. This kind of participatory learning makes all the difference when it comes to opening minds. The Edible Schoolyard, for instance, has shown that if you offer children a new dish, there’s no better than a fifty-fifty chance they will choose it. But if they’ve been introduced to the dish ahead of time, and if they have helped prepare it, they will all want to try it.

Learning is supposed to be a pleasure, and a food-centered curriculum is a way to reach kids in a way that is truly pleasurable. At first, the kids may not quite believe that they are allowed to have so much fun outside in the garden. But before long, they all know what compost is. And all know what’s ripe and what’s not ripe, and when. This is knowledge they have learned without realizing it from experiences like picking the raspberry patch clean every morning. While they are touching, and smelling, and tasting, so much information floods in — because they are using all of their senses. What better way to learn about geography than by combining twenty-seven aromatic spices to make an Indian curry?

This is the beauty of a sensory education: the way all the doors into your mind are thrown wide open at once. Esther Cook, who teaches in the kitchen at King school, says it so beautifully: “The senses are truly the great equalizer. They are the key to a beautiful life, a really fulfilling life, and they are available to anybody.”

A slow school education is an opportunity that should be universally available — the more so because kids aren’t eating at home with their families anymore. In fact, in the United States, many children never eat with their families (an observation confirmed by our experience at King School). Our most democratic institution, the public school system, now has an obligation to feed our children in a civilized way around a table. And students should be asked to participate — not just as a practical life exercise, but as a way of putting beauty and meaning into their lives.

There are countless ways to weave a food program into the curriculum at every level of education. The creation of the Slow Food University in Pollenzo, Italy, which will open next fall, clearly shows the seriousness and wide reach of an eco-gastronomic perspective. It is re-configuring gastronomy as a subject of academic inquiry. The depth and breadth of the subject — its relevance in ecology, anthropology, history, physiology, and art — assures it could easily be integrated into academic studies of every school, from the kindergarten to the university.

Now if every school had a lunch program that served its students only local products that had been sustainably farmed, imagine what it would mean for agriculture. Today, twenty percent of the population of the United States is in school. If all these students were eating lunch together, consuming local, organic food, agriculture would change overnight to meet the demand. Our domestic food culture would change as well, as people again grew up learning how to cook affordable, wholesome, and delicious food.

To make this a reality we need more model programs at all levels; when these models are good enough, we will have the momentum to seek the mandate and the money to make them a reality throughout the country. We know from experience that it can be done.

Forty years ago, a presidential commission in America told us our children were physically unfit and that we had to launch a national physical fitness program. The country responded by building gymnasiums, buying equipment and training new physical education teachers, and by making physical education a required part of the curriculum in every school. Today we are worried anew over the health of our children. Child obesity is shocking, and at the present rate of increase, one out of every three children can be expected to develop diabetes, and for African American children, the statistic is one out of every two. We must respond by bringing real food, nutritious food, back into the schools and into the curriculum. We must create new incentives for educators to integrate real food into the lives of their students. Perhaps the best and most radical way to do this is to give credit for school lunch, just as credit is given for physical education or for math or science. This would add a new dimension of integrity to the lunchroom, placing it on a par with the classroom, and breathing new life and dignity into learning how to eat.

What we are calling for is a revolution in public education — a real Delicious Revolution. When the hearts and minds of our children are captured by a school lunch curriculum, enriched with experience in the garden, sustainability will become the lens through which they see the world.