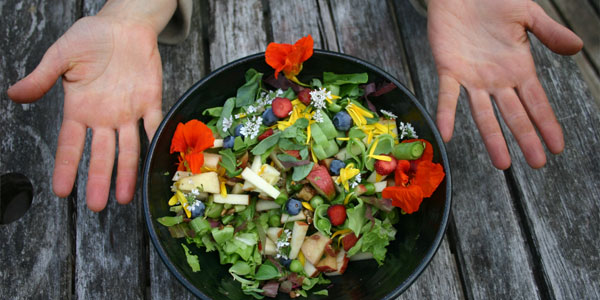 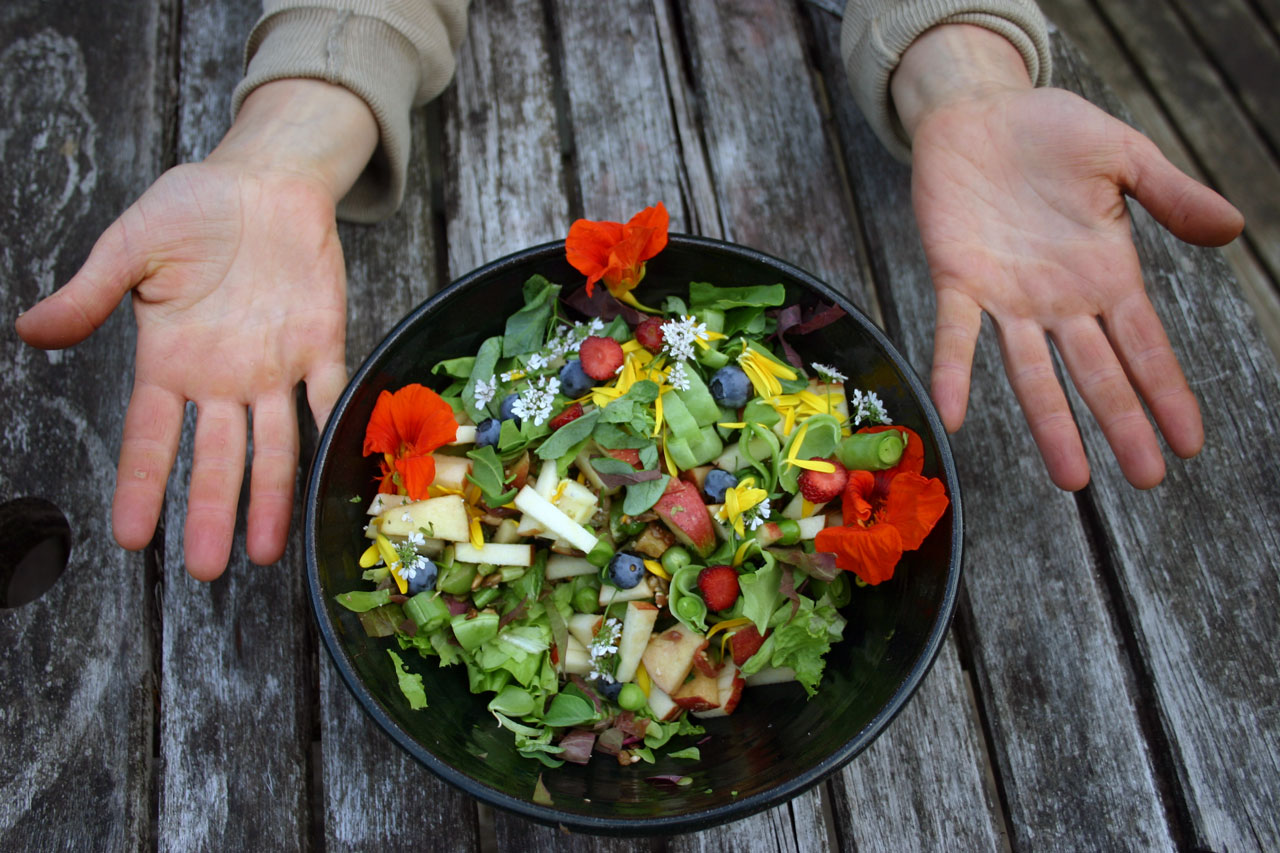 by Alexia Allen of Woodinville, WA

In 2003, I moved to a house on 3 acres in suburban Woodinville, Washington, just northeast of Seattle. Chickens and a raspberry patch were about what I could manage along with a full-time job, but I made a game of eating something from my land every day of the year. I did this even before my home turned into Hawthorn Farm, when it was just a suburban house with some scraggly raspberry bushes and a weedy lawn. A dandelion leaf, a raspberry, a chive flower or green needles from a Douglas-fir tree — all these qualified as my daily taste of land and season. When I struck up a friendship and then a romance with a man in Montana, it was only a matter of time before his dedication to farm-fresh food spilled into my life.

Our romance was a courtship of meals. We feasted on his elk and my chickens, his squash and my raspberries, his home-made sauerkraut and my blueberry cobbler. During a visit to Hawthorn Farm in the winter of 2011, Daniel mentioned a fourteen-year-old student of his who had spent a whole month eating only foods gathered from the wild. 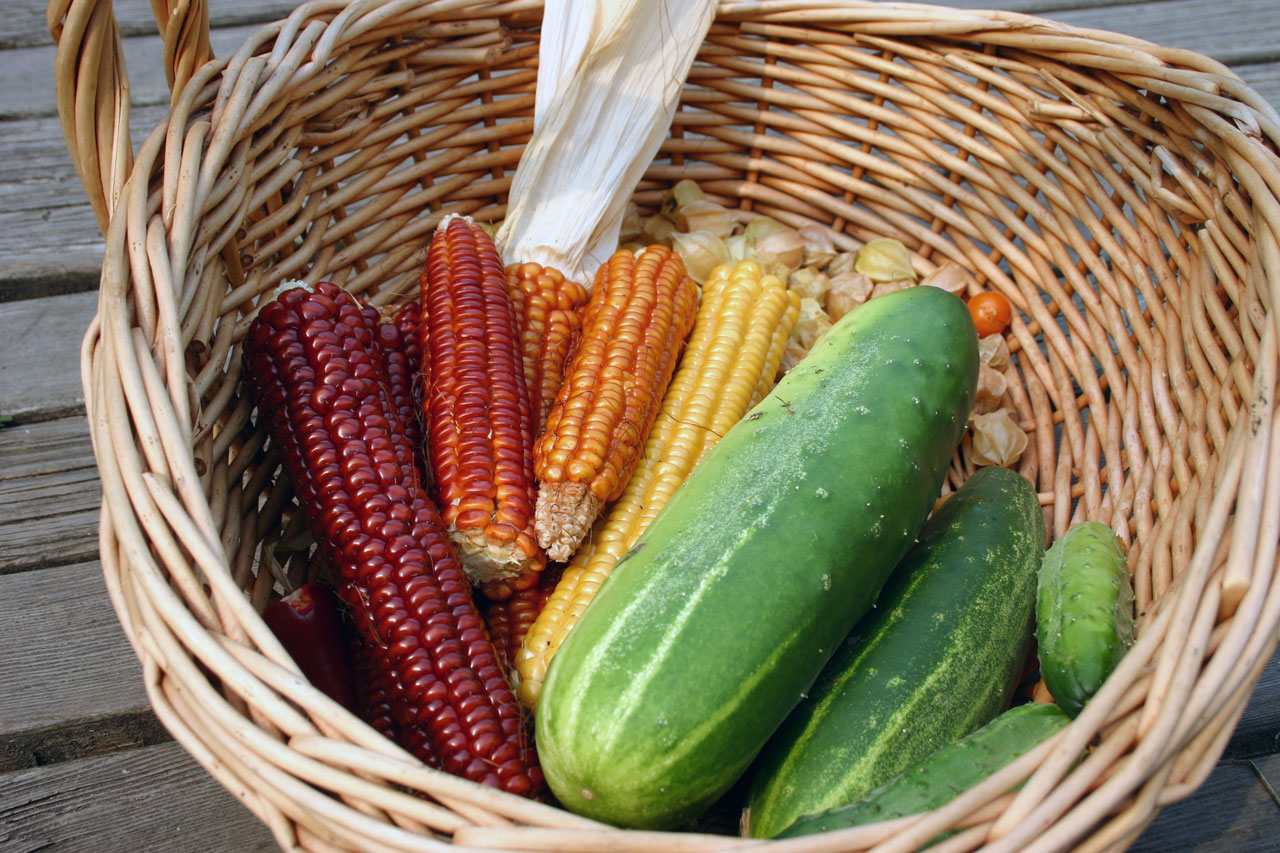 “Could we go for two days on the hand-harvested food we have here?’ he asked.

“Let’s give it a try!” I responded with my usual enthusiasm.

We assembled the ingredients on the table. A frozen chicken. Shriveled hazelnuts. Kale from the garden. A few squash. Dried nettles and fresh cedar fronds for tea. All in all it wasn’t terribly inspiring, but it was calorically viable. Hunger is well known to be a superlative sauce. We ate what we had and relished the flavor of integrity. Everything on that table had passed through our hands. We knew all the costs and calories associated with it. No hidden injustice, no questionable pesticides — only our skill and ability and knowledge of place. We felt joy at living in such an edible world.

We missed salt, we survived. We liked our two days. We generated no trash from the kitchen. 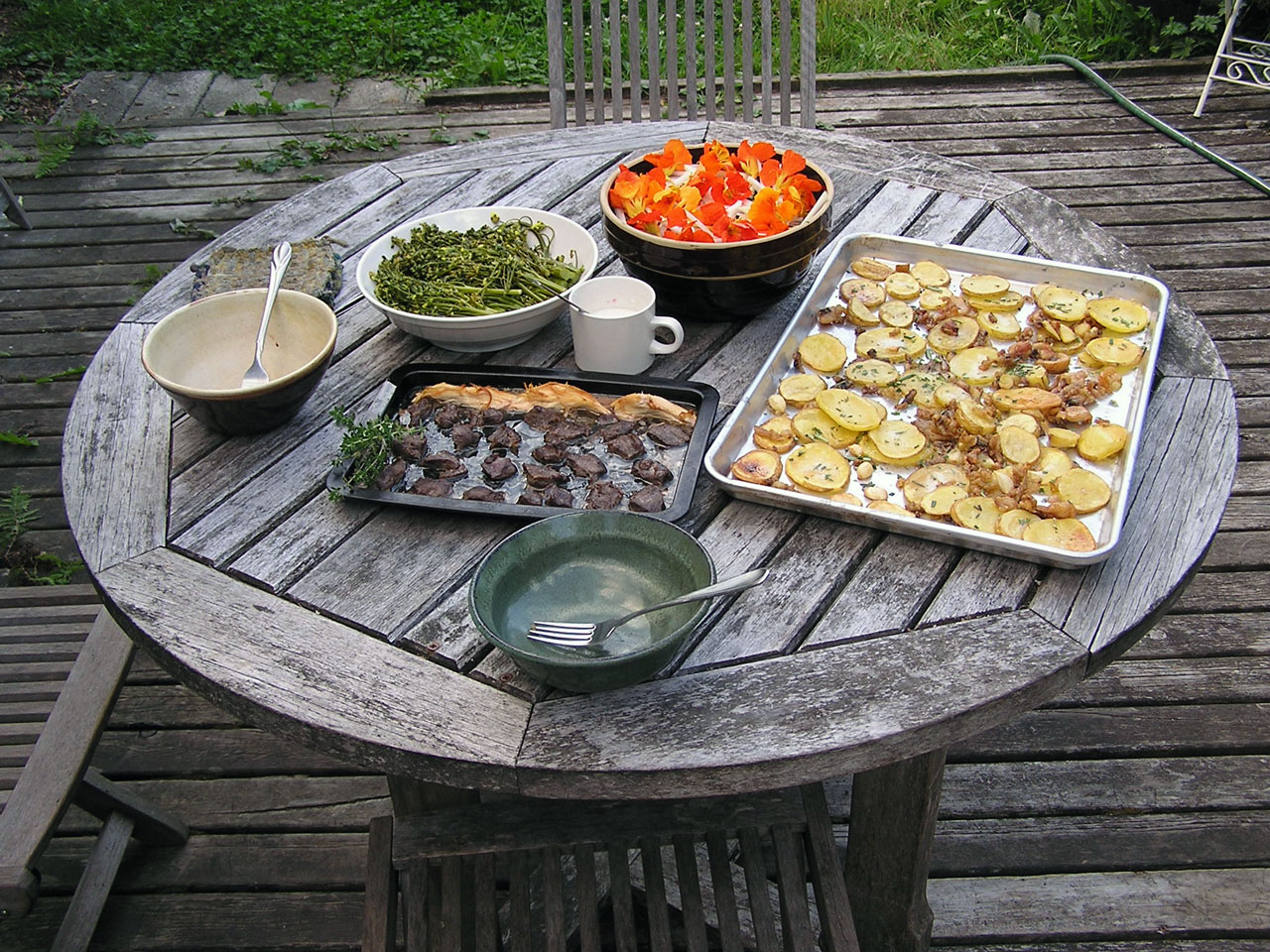 “Let’s do this again!” enthused Daniel. So we did, fitting what we dubbed the Hand-Harvested Food Challenge into his visits to my farm during the years he lived on the east side of the Cascade mountains and I was in western Washington. We tried it for a week here, a week there, throughout all seasons of the year. I thrived with the food-growing inspiration. How much kohlrabi could I grow? What about more greens? What were the caloric staples that could get us through the winter? Where are the apple trees in the neighborhood? A week here or there became two. We started thinking about a full year, a year that would see us eating with all the integrity we could muster through four seasons. Ever-sensible Daniel shaped the curriculum. “If we do one month at the start of 2015, and then one week a month for the rest of the year, we’ll be ready to do three consecutive months in 2016, and then 2017 will be our big year!” I have learned to pay attention to Daniel’s plans. They have an eerie way of coming true, including his move to Hawthorn Farm in October of 2014. It taps into my deep desire for food justice and connection, and a way to take those matters into my own hands. Literally my hands — though we have expanded our guidelines in subsequent years, we started with a strict parameter of only eating what he and I had gathered from the garden or the wild. Now we have expanded it to include food given or traded with friends — who show up with lovely contributions like home-made mushroom logs or buckets of ripe figs!

The food challenge is not without its flaws. We don’t do much shopping at the grocery store, it’s true, but we have rung up an equivalent bill at the feed store. We still drive to get food, even if it’s around the corner to load the trunk full of plums a neighbor said we could pick. There is also the time it takes to tend the animals, to weed and rake and hoe and highlight my favorite seed catalog dreams. If I did not love the process, it would be intensely burdensome. In my smug pre-gardening days I would have said that everyone should grow their own food. Now I see that I am simply reclaiming a piece of human history that is refreshingly ordinary.

Until recently in human history, a hand-harvested food challenge was not impressive at all. It was just what everyone did. There were no other options. When I was a kid reading books that described the joy of getting an orange for Christmas, or the elaborate risks of sailing ships traveling to buy pepper, cinnamon, and nutmeg, I had no frame of reference for how special those foods were. Now I relish the taste of exotic spices like ginger with intensity. Aha, this is why the spice trade was such a big deal! Our Food Challenge gives me a window into what it was like to eat exclusively from one bioregion. If anyone is traveling to a place where you can gather cinnamon or nutmeg, I’ll trade you for some serious goat cheese. 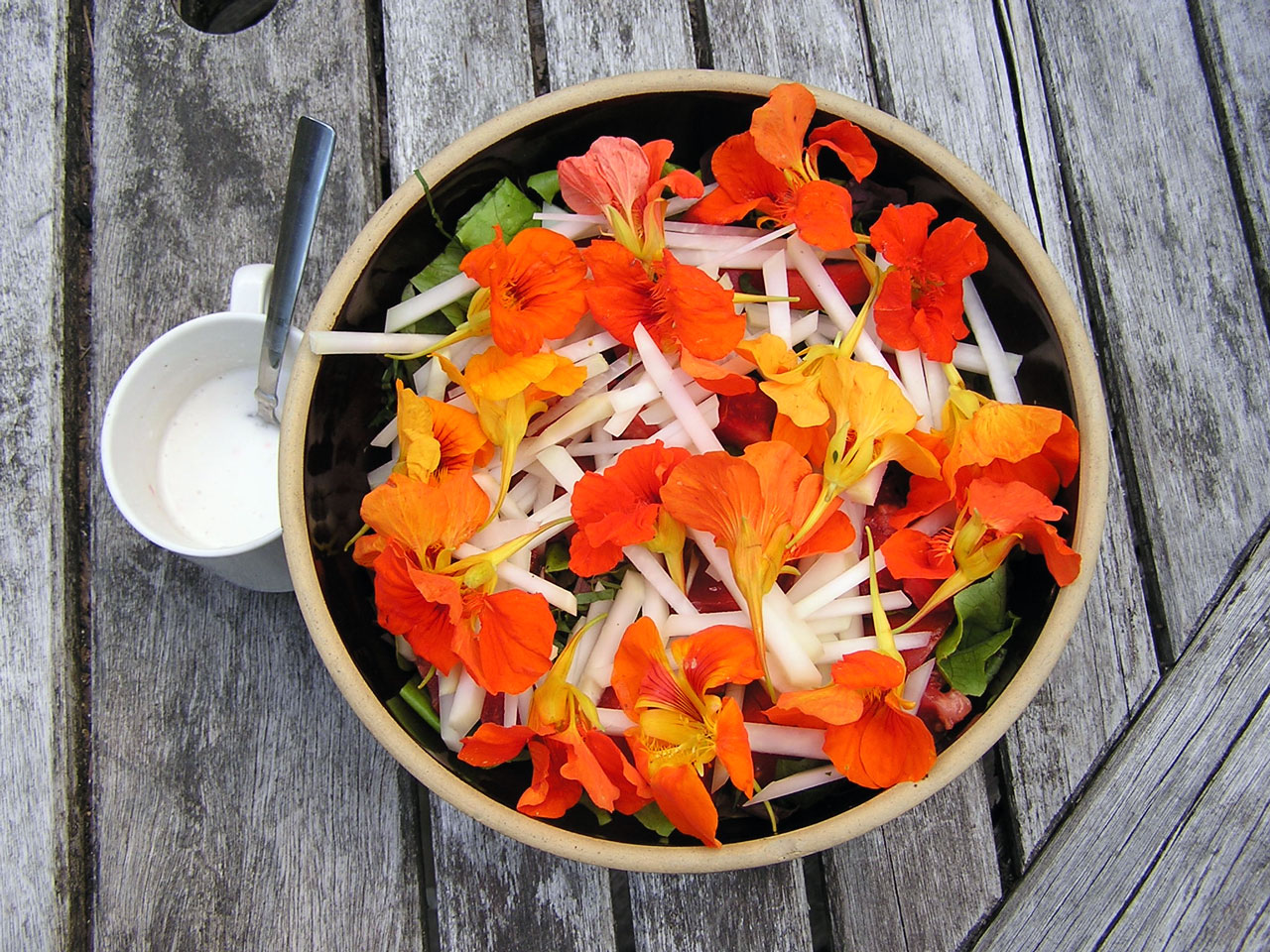 Animals are a key part of the Food Challenge. Ducks roam the pasture hunting for slugs to convert into eggs, and chickens housed over the winter gardens give a fertility boost along with eggs and meat. Dairy goats joined the scene in 2012, adding creamy milk, yogurt, and cheese. I find it very satisfying to weed the garden when I know the hungry goats will welcome the buckets of dandelions and kale I bring them. Whatever the appalling inefficiencies (or “efficiencies”) of animals in a factory farm setting, on our homestead they are valuable alchemists and companions. Slugs turn into eggs! Weedy mustards into fine cheeses! Manure goes back to the garden to complete the cycle! The animals are true partners in this adventure. Caring for these animals requires dedication, but the trade-off is that we do not rely on the grocery store to get milk. We also continue to experiment with how to feed animals entirely from the farm rather than going to the feed store, so that they join us in independence from petroleum and off-farm inputs. Each year I make more and better hay, cutting it by hand with a scythe. We have a long way to go before this farm is humming along with food for everyone year-round — but we are a lot further along than when we started. 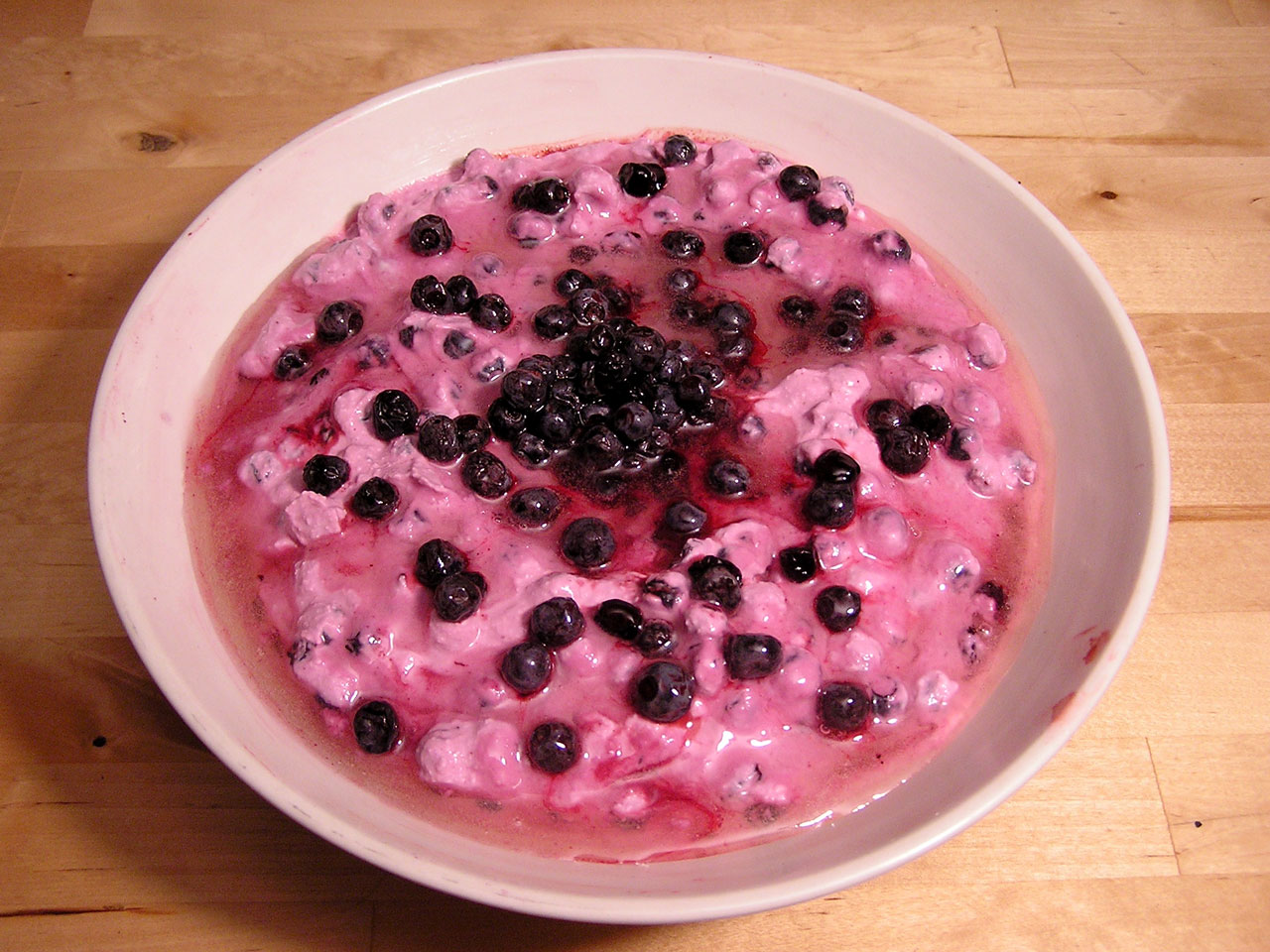 After a meal with us, Daniel’s father pushed back from the table. “Food Challenge?” he said. “It’s more like a Food Celebration.”

We enjoy a greater palette of ingredients than our first few days back in 2011. We have forty gallons of sauerkraut that Daniel has made from cabbage, carrots, peppers, and onions from the garden. The kraut uses salt from clean sea-water, which also makes brines for my cheeses. Wheels of goat cheese age gracefully, patiently waiting to be grated on salads or sauteed kale. Hidden in paper feed sacks, a rainbow of potato varieties lines the walls of the cold storage room, and we offered growing space to a local potato breeder who has planted literally a hundred more potato varieties. For six months of the year, crates of squash made themselves at home in the library. Elk stew with home-grown beans and tomatoes is a winter feast — top it with a kale, kraut and apple salad, a big bowl of popcorn, and finish it off with blueberries, applesauce and honey-and-cream custard. This just tastes good. If I want others to be more aware of their food supply, of the sanctity of the land we eat from, I had better make it delicious. 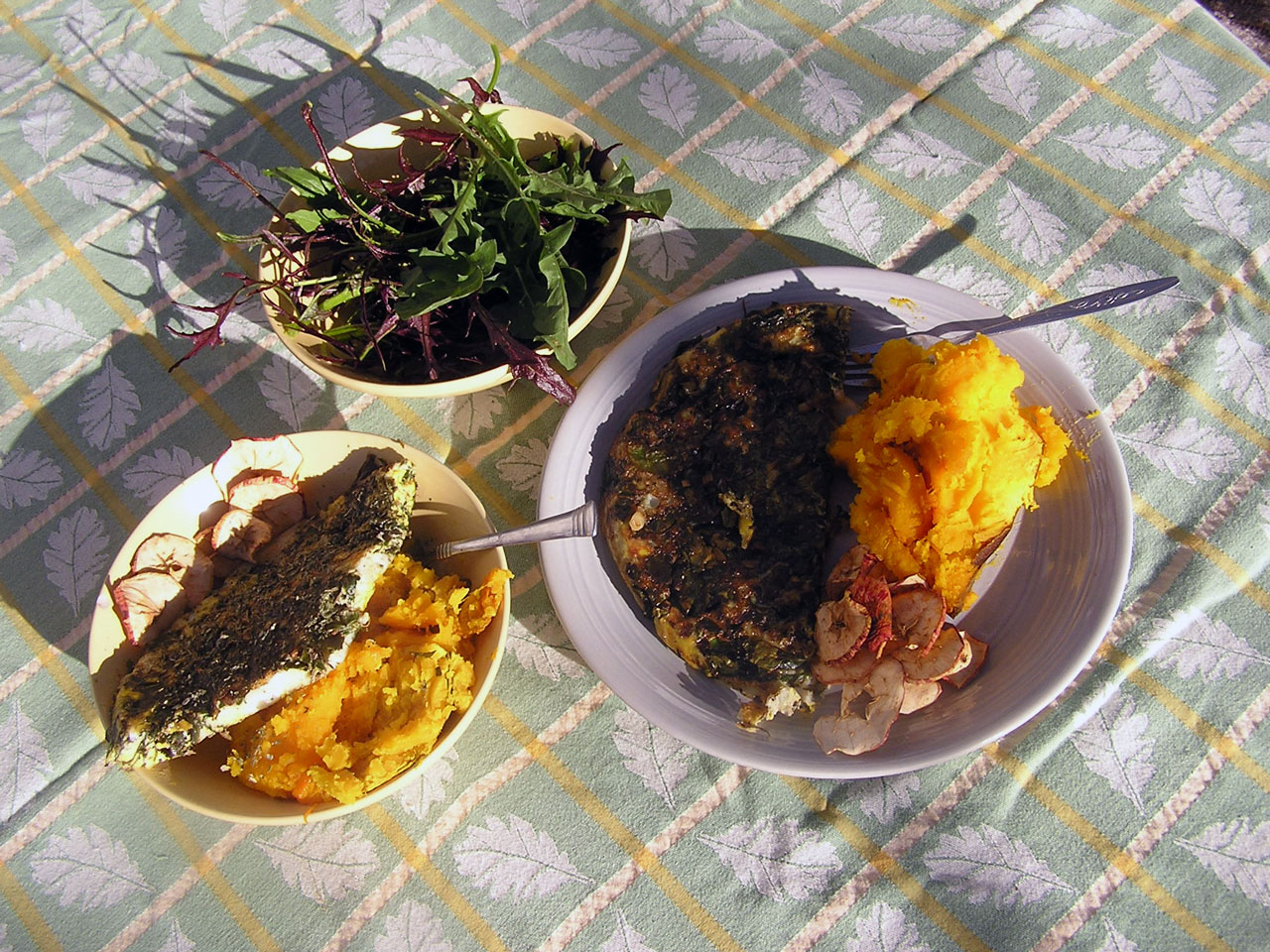 The humans on and around the farm are an essential piece of the equation if we are truly restoring culture and community through our food supply. Daniel once asked me what I thought was the most important crop we could grow at Hawthorn Farm. I replied, “Healthy, happy, skillful people.”

An April day’s mealsFilling in the “Hunger Gap” when last year’s stores are dwindling but the new growing season still isn’t providing many calories:

I cannot overestimate the joy and importance of making space for more people on the farm. Anthony Andreasik joined the farm as a fresh-from-the-suburbs of Chicago kid in 2013. In the crucible of the milking room, the woodlot, and the garden, he has become a capable man who did his own completely hand-harvested challenge for six days over the past season. He grows greens for the whole household in the now-legendary “T-bone’s Forest of Kale,” and is my right-hand man when it comes to goat management. Did I mention that stories are one of the main crops at Hawthorn Farm? He is writing a children’s book. Quinn Bailey, a more recent addition to the farm, sat down with us last summer in an “entrance interview” to see if he would be a good fit for the household. After he said that he appreciates the spiritual lessons of hard physical labor, we signed him right up! Quinn teams up with Daniel to manage our poultry. Our ties with the surrounding human community help fill my longing for a cohesive village, and our communicative and helpful household quenches my thirst for caring, supportive family. Farming does not have to mean a life of toil or isolation. I have the time to write this article because Anthony is picking up several of my milking shifts. 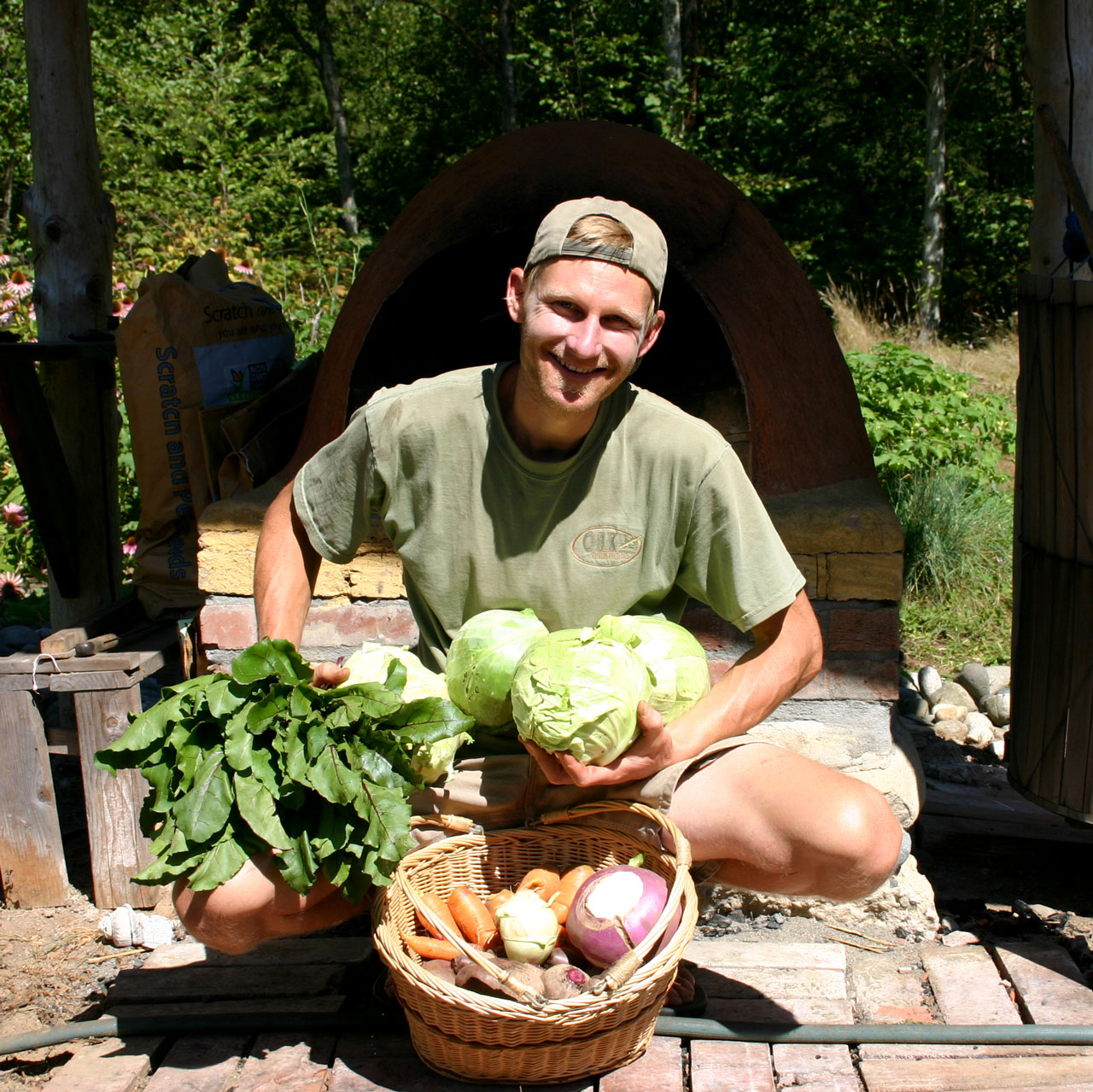 This is the current household; we host a steady stream of other visitors over the years, whether for a day or for months. The work of this multitude has been instrumental in shaping the gardens. During the growing season, we open our farm to the public once a week. Everyone works for the morning and then harvests whatever is bountiful that day. Our farm-day potluck feasts prompt Quinn to comment, “We may look like paupers, but we eat like kings.” Letting kids loose to dig up potatoes, with eager ducks nabbing earthworms out from the chaos, gives fond memories as well as full root cellars. We weave together the threads of humans and soil, providing a place to remember that there is ultimately no separation between these two. We all eat. Wherever you are, do it with integrity and joy. 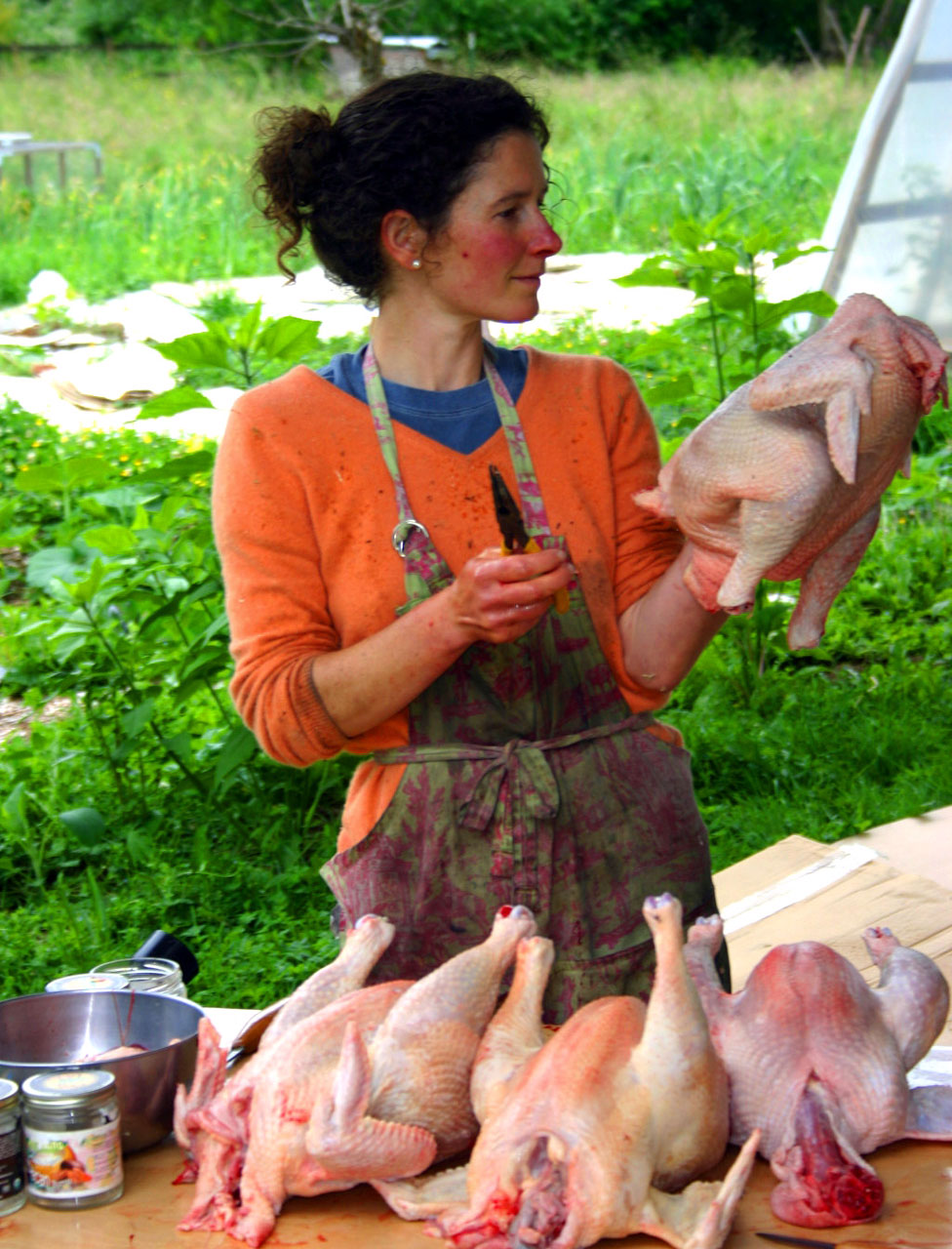 Alexia Allen is a Renaissance woman who lives and thrives at Hawthorn Farm with Daniel Kirchhof, Anthony Andreasik, Quinn Bailey, and a pile of happy goats and visitors. 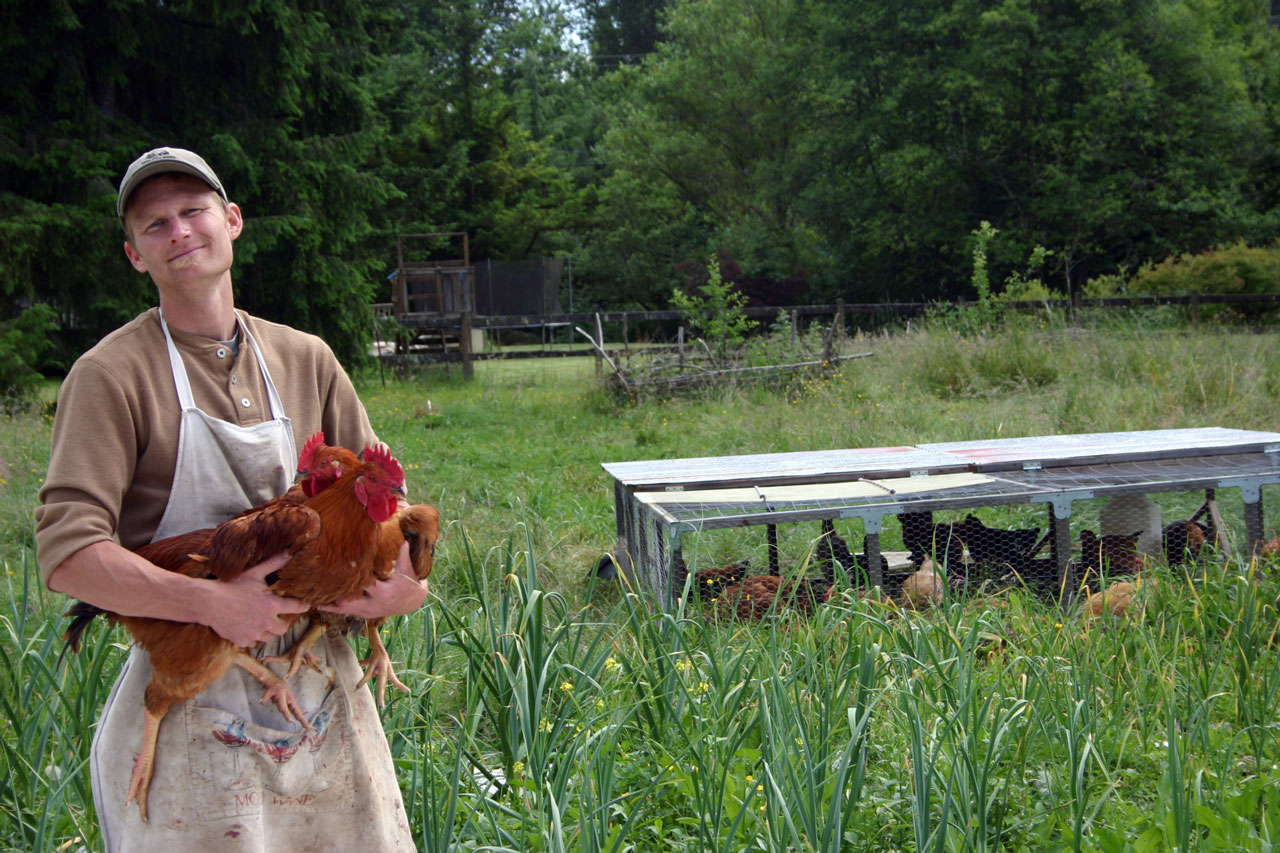 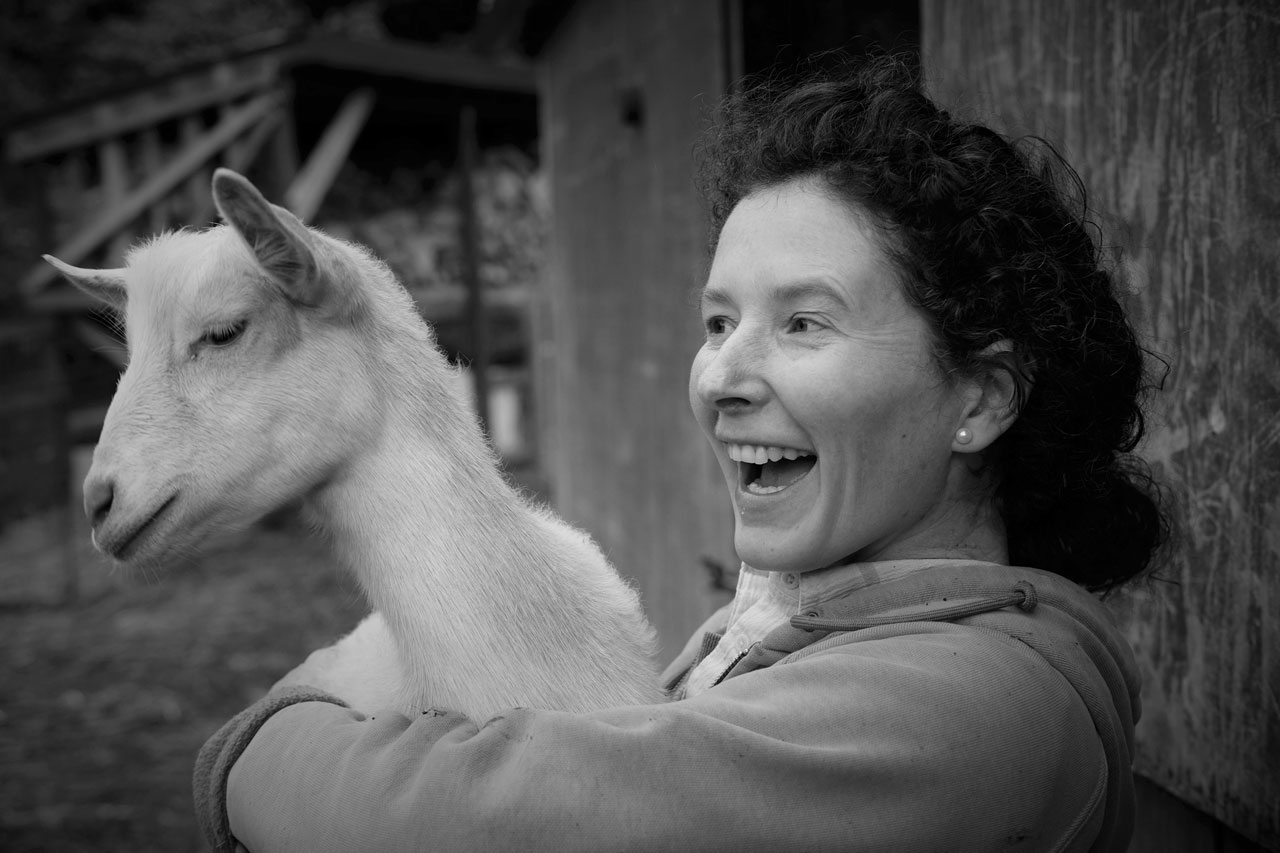 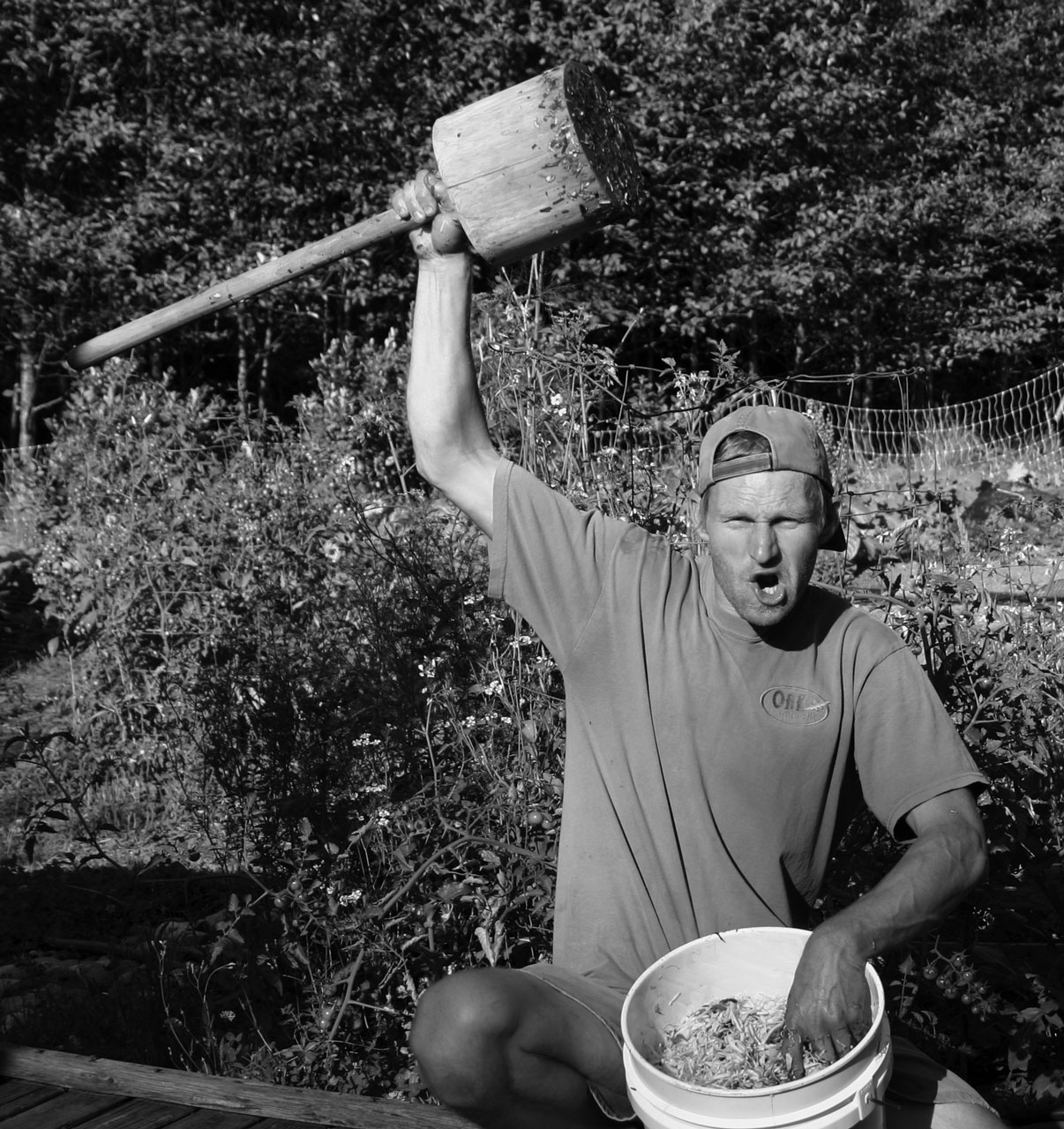