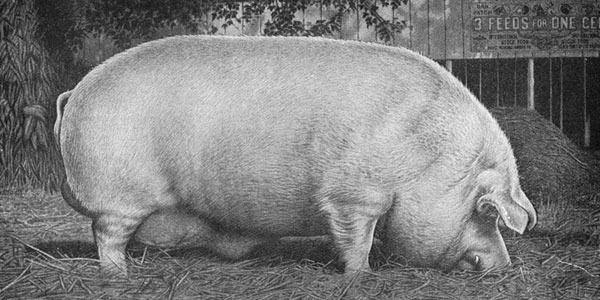 Farmers once drove hogs on the hoof instead of into a truck.

by Rex Gogerty of Hubbard, IA

Hogs used to walk to barns and markets rather than ride in double-decker trailers and snooze in air-conditioned barns. Modern confinement systems, 18-wheelers, and hydraulic carts have relegated hog driving to a lost art, and swine drives are only farrowing-house conversation topics. However, a couple generations ago, farmers moved hogs the old-fashioned way. They drove them.

Hog drovers have gotten little attention from historians, novelists, and TV producers in painting romantic pictures of frontier agriculture. They’ve concentrated on rope-smart cowboys trailing herds of white-faced cattle. Hog drovers didn’t get much glamour. They wore bib overalls and walked, but some of their roundups were colorful and impressive.

For example, my grandfather and some of his neighbors once trailed 150 Hampshire hogs 28 miles across open prairie and the frozen Iowa River. They corralled the herd in a cemetery overnight and covered the river ice with straw to provide a skid-free surface for the puzzled pigs.

Gramps said herding hogs through open country was a breeze compared with driving them through towns. Long before they reached the stockyards, hogs would often get spooked by city sounds and kids with slingshots. Of course, ladies terrified the pigs by waving their aprons to make sure the hogs wouldn’t foul their flower beds.

Cross-country, epic hog drives required wagons loaded with food and feed for drovers and their livestock. One herdsman drove ahead with a team and wagon to leave grain at designated rest areas. Some drives included “hospital wagons” to care for sick or injured hogs. The book, “A Century of Farming in Iowa,” (ISU Press) documents an 1865 hog drive that covered 100 miles from Monona County, Iowa, to Yankton, South Dakota. A longer drive stretched from Delaware County, Iowa, to Chicago’s Union Stockyards.

Some hog driving was contracted by professional drovers who often moved hogs at night when temperatures protected against overheated hogs. Darkness also reduced distraction during the mile-per-hour pace. My great-uncle Berry used his own brand of 1890s pig psychology to drive hogs. He reassured the animals by talking as he trailed. Sometimes he whistled a tune or clacked two sticks together to hold their attention and keep them on the trail.

Uncle Berry had what it took to be a successful hog drover: patience. He never tried to hurry hogs, even when the weather was cold and blustery. He used a canvas slapper or buggy switch to avoid injury. Occasionally he would slide a five-gallon bucket over a sow’s head to maneuver her in tight quarters. He figured it was easier to outsmart a hog than to outrun him. “Too much cussing and poking will get his head on the wrong end every time,” he added.

Herding hogs from farm to farm was common in the days before swine confinement dominated hog production. On our farm, we stationed our kids at crossroads and gateways. No shouting or tossing dirt clods was aloud. We also drove young pigs on the open road only when they were accompanied by older, smarter sows.

We closed the field gates and flagged occasional traffic, but bridges were scary for pigs. One of our plank bridges had a railing and a well-graveled deck. The herd usually crossed without a look back. The other bridge had no railing and bare planks that echoed every hoof beat. The rippling creek below and an occasional pigeon darting out from under the bridge strained the nerves of both hogs and handlers. My grandmother called it “Hail Mary Bridge” because she always said a prayer for drovers and driven alike when we tackled that crucial span.

One spring day, a stubborn sow snorted past our scoops and shouts and escaped to farrow eight pigs in a forty-acre corn field. That fall, after the corn was harvested, neighbors helped us with a roundup and wild-hog hunt. That was some of the best roast pork I ever tasted.

Feedyard hogs don’t always behave like Fair pigs so over-the-road drives were never uneventful. Even in our more automated hog-handling era, I encourage farmer friends to try a proven transport system: Open the gate, head ‘em up, and move ‘em out.