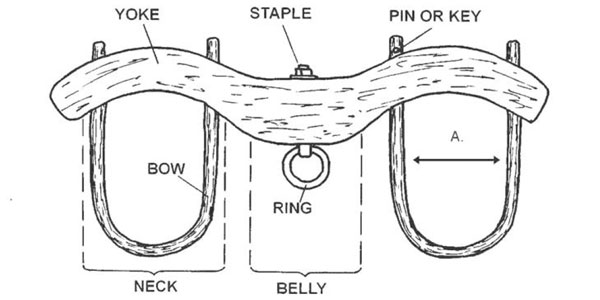 The Ox Corner is designed to pass along fact based and field proven information about working steers and oxen. Working cattle have been a dependable source of traction power on farms and in the woods for centuries, and there is a place for them in today’s world.

A FEW PASSAGES FROM THE AMERICAN FARMERS STOCK BOOK –

When I asked Howard Van Ord how long he had been raising and training working cattle, he immediately explained that he purchased a pair of calves from the Warren County Farm on November 1, 1957. I have asked many ox teamsters this question and most times they can tell me exactly the year they trained their first pair of cattle. There is something unique about the first team and the success and mistakes we may make with them.

Howard was raised on a Pennsylvania farm. His father farmed with horses and raised cattle. From a very young age Howard was no stranger to animal draft power. During the early years of his employment at the County Farm, Howard was befriended by Pop Weir. Pop had been a blacksmith in logging camps where oxen were used regularly for twitching and hauling. Although Pop was not a teamster in the camps, he had attained a good basic knowledge of oxen use and the equipment they needed.

After purchasing the Hereford/Holstein cross calves, Howard looked to Pop for help in making a calf yoke and advice in training the calves. He did both with immediate success.

Not only did Howard begin his life as an ox teamster at the County Farm, but also met a girl named Betty there. She became his wife.

In 1961 Howard and Betty bought a 68-acre farm in Farmington township. On this farm they raised kids and cattle. Aside from what Pop had taught Howard, there being no other ox teamsters in the area, Howard relied on what information was made available to him through written resources but mostly taught himself the skills through trial and error. In a short time Howard became an accomplished teamster.

Howard and Betty raised a large garden to feed the family. The soil preparation was done with the cattle as was the wood hauling and other jobs around the farm.

As time went on, Howard searched for a pair of Devon bull calves to be his next team. During the search he purchased three Devon heifers. Howard’s father, being the resourceful farmer he was, convinced Howard to train two of the heifers to work in the yoke. He did just that and found that he had a very capable team. He eventually did buy bull calves, but has worked many heifers, cows, and steers over the years.

In the spring of 1976 Howard purchased a pair of five-year old Devon oxen. They were quite handy and he became quite content with them. One July day, a 70 year old man visited Howard’s farm and explained that he had heard that he had bought a pair of Devon oxen. Howard yoked the cattle to show the gentleman what they could do. The man then asked Howard if he could drive them. Howard was a bit uncertain if he could handle them knowing that there were not many experienced teamsters in the area. The man proceeded to drive the cattle quite comfortably. To Howard’s surprise, the man slipped the yoke off the cattle and continued to drive them with no apparent trouble. The man, named Johnny Lamb, then went on to tell Howard that he had trained the team.

Johnny had experience working single cattle. He would slide a horse collar (upright) on their necks and attach traces for pulling. The hame staple had been raised three inches to accommodate the traces. Howard liked the use of the single animal, but was concerned with the animal’s shoulders blistering and tearing because of their natural movement against the collar. He made Johnny a single yoke for the animal. Johnny was delighted with the yoke and switched to a yoke system thereafter.

Howard and Betty have been excellent ambassadors and teachers in the world of oxen. They led a 4-H working cattle club for 30 years. They taught many dozens of kids and parents how to train and work cattle.

Howard was instrumental in establishing the Midwest Ox Drovers Association and served as its president for three years. He and Betty make yearly trips to Tillers International and Fryeburg Fair to share their skills and stories and to spend time with other ox folk.

Howard has instructed at many gatherings and workshops and this last year he and Betty attended the First Annual Animal-Powered Field Days in Tunbridge, Vermont. Howard shared valuable information with large groups of people during the ‘Working with Oxen’ seminar and the roundtable discussion.

Howard is a farmer, a teamster, a teacher, and much more! He is a credit and an asset to the world of working cattle.

Diagram for Measuring an Ox Yoke

Rough beam sizes for yokes (these numbers can vary depending on how deep a yoke belly is required):

I would recommend Pine, Spruce, Poplar, Aspen, Basswood or another light wood for 4” calf yokes. From the beginning of training, the calves need to be taught to keep their heads up and the light-weight yoke will make this more comfortable.