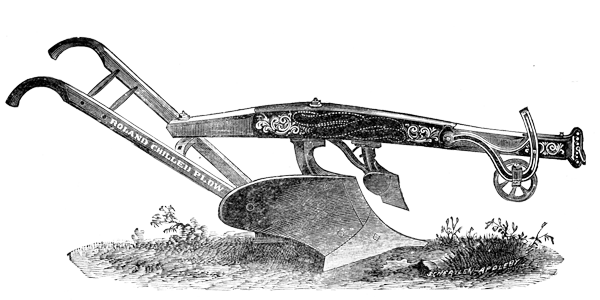 The Satisfaction of a Well-Turned Furrow

The Satisfaction of a Well-Turned Furrow

by Sue Wunder of Bloomington, IN
from the May 07, 2001 edition of the Christian Science Monitor

Handling a horse-drawn plow is a little like pedaling from the back seat of a tandem bicycle: You have to adjust your balance and trust your direction to a cooperating but independent force. The more relaxed you are about it, the steadier your path – or furrow. When we plowed up a small garden plot with our team of Belgians today, Charlie took the reins, I the plow handles. The idea is to keep one horse walking in the outermost furrow, the other on the un-turned grass, and the plow blade positioned so it slices a new furrow parallel to, and slightly overlapping, the last one.

When it actually happens that way, and a paring of fresh earth curls over to crumble in the wake of the team’s hooves, it is enough to bring tears to the eyes. The simple symmetry, sudden fragrance, and fertile promise of a well-turned furrow probably speaks to something universal in the human experience – something tangible through a gardener’s spade. But a well-turned furrow can elude a horse-powered plow.

Doc and Jim had been at their leisure over much of the winter and early spring. The few times they’d been in harness, they’d hauled manure or dragged logs, work that does not require the finesse needed to turn over a small vegetable plot amid young and flowering fruit trees. Today, there were a lot of “gees” and “haws,” clicks and “whoas” for them to sort out and respond to. Despite Charlie’s firm and calm commands, Jim often lingered behind Doc, as if enjoying the blossomed breeze. And Doc sometimes stepped out of his furrow path for better footing, pulling us off course.

They weren’t the only ones who had to warm up to the task. This was my first time at the plow, and I found myself at odds with the heavy steel blade. It seemed to dig into or skip over the ground of its own accord. My furrows snaked and wandered, dived and unexpectedly surfaced like the path of a giddy mole. I only half-heard Charlie’s over-the-shoulder instructions as I struggled to keep the handles level and the blade on its planned trajectory.

We had all the time in the world, the day was cool and lovely, and there was no reason not to just keep at it. During a short break, Charlie (who can tie the reins behind his neck and direct plow and horses simultaneously) gave me some pointers, but he added that it was mostly a matter of “getting the feel of it.” He said he couldn’t really explain how to hold a plow; the knowledge would have to come to me as I held it.

When we started up again, an old memory welled up: that first exultant glide after my father’s steadying hand had lifted from the back of my bicycle seat. All at once I relaxed and felt connected not to a lump of contrary metal, but to the living force that a plow becomes behind a team of horses. And a long cusp of earth curled over like an unbidden line of poetry, all but making music.

Doc and Jim found their rhythm and Charlie took us all around again and again. When we were done, he unharnessed the horses, I curried their thick but rapidly-shedding coats, and we turned them out on the greening pasture. Then we pulled off our shoes and walked atop the freshly turned earth, breathing in its damp exhalation of spring.

It’s a feeling all its own, walking barefoot in a well-turned furrow – good down to the toes.