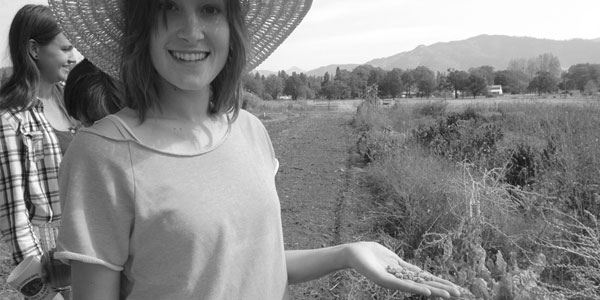 Training the Next Generation of Farmers and Ranchers in Oregon

Training the Next Generation of Farmers and Ranchers in Oregon

by Stuart O’Neill of Ashland, Oregon

Standing on the recently cleared pad for the soon to be built farmstead creamery at Yale Creek Ranch in the Little Applegate Valley, it is hard to fathom the changes that have taken place. It has been only three years since Tim Franklin died in a tragic accident. And only four years since Jonathon Steiger was an intern down the road at Siskiyou Crest Goat Dairy.

Tim Franklin ran cows, pigs, goats, sheep, and chickens on the pastures of Yale Creek Ranch, 87 acres at the mouth of Yale Creek and the Little Applegate River. Yet unlike the ranchers of old, Tim managed the pastures to benefit the soil first and foremost. The animals moved in an elaborate rotation, one following the other, through a series of paddocks.

Ten years ago, Tim got together with his neighbors, Maud and Tom Powell from Wolf Gulch Farm, Kris Hoien from Spirit Ranch and Michael Moss from Siskiyou Crest to sprout some big ideas. As a new generation of sustainable farmers working land in the rugged foothills of the Siskiyou Mountains, they knew that they had to collaborate to be successful.

They helped launch the “Salmon Safe” label to support farmers and ranchers whose practices benefited the land and water. They banded together with neighbors to start an agricultural cooperative to collectively market products and sell then directly to consumers. And they wanted to support the development of the next generation.

Being first generation farmers, they all knew first hand the challenges of starting a farm business. Experience, education, training and mentorship were crucial in their personal journeys as farmers. They also recognized the looming crisis facing our farm communities, namely the rapidly aging farmer. Rogue Farm Corps was founded from this understanding.

A nonprofit organization with a simple mission of training the next generation of farmers was born out of the community in the Little Applegate Valley. Rogue Farm Corps has built upon this community spirit to become a leader in new farmer education.

To see the walls of Jonathon’s new creamery go up is a testament to the determination and hard work of this new generation of farmers. Jonathon was born and raised on a large commercial dairy in Wisconsin. The family business milks a large herd of conventionally raised cows daily. Number eight of ten children, Jonathon was born to be a dairyman, but something just wasn’t right with the family business.

When Michael Moss started the Siskiyou Crest Goat Dairy, the vision was to build a farm business that worked in concert with the land that supported it and to build a dairy herd that was well cared for, with access to fresh pasture, clean pens and a well-rounded health care regime. When Jonathon and his partner Tyson arrived there four years ago as interns, they found a style of agriculture that matched their vision.

After a season interning with Moss, Jonathon and Tyson moved back to Wisconsin with an opportunity to grow food by day and to work their jobs in fine dining that they held prior to the season in Southern Oregon by night. The chef at the restaurant was interested in locally grown food and the business had recently acquired access to some farmland nearby.

This arrangement allowed them to gain some experience on their own, while honing their agricultural knowledge and skills. Meanwhile, they kept dreaming about the dairy in Oregon.

Back in Oregon, Rogue Farm Corps had grown beyond the confines of the Little Applegate Valley and now had host farms all across the region. New farmers were arriving annually to learn from dedicated mentors. The vision of farmers like Tim, Maud, Tom, Kris and Michael to train the next generation had taken root. Farmers outside of Southern Oregon were paying attention. There were requests to build networks of new farmer training programs across the state.

The age-old model of mentorship in exchange for a place to stay and food from the farm was about to be upended. The first sign of trouble arrived in 2009 when a farmer in the Willamette Valley found herself subject to a wage claim violation by a disgruntled former intern. In 2010, one of Rogue Farm Corps host farms was sued in court for wage violations. There were reports of farms in California where labor officials were interviewing work crews in the fields to determine their employment status.

This confluence of events sent shock waves throughout the farming community. Rogue Farm Corps found itself in the uncomfortable position of facilitating illegal farm internships and putting host farmers at great risk. Despite the wide spread practice of farmers offering housing, food and experience in exchange for some help on the farm, the reality of labor law meant that these informal arrangements were in great jeopardy.

Rogue Farm Corps entered the fray and began working with partners across Oregon to further develop its model of education and training, beginning with a meeting of stakeholders in the state capital.

Oregon State University Extension Small Farms Program, Friends of Family Farmers and Rogue Farm Corps staff met with officials from Oregon Department of Agriculture and Oregon Bureau of Labor & Industry to gain an understanding of the rules around internships, apprenticeships and other training models.

With only some minor tweaks and adjustments, it was clear that Rogue Farm Corps’ program could become a legal on-farm internship that conformed to labor laws while maintaining the spirit of mentorship and knowledge exchange. Rogue Farm Corps took on the mission to build a training program that upheld labor protections that were gained through great struggle and perseverance, with strict protections for workers and awareness that on-farm internships could no longer “fly under the radar.”

Rogue Farm Corps staff reached out to the local community college to build a partnership and create a bona fide educational framework around the internship program. After one season of working side by side with the community college to design a model for on-farm curriculum development and evaluation, Rogue Farm Corps took the model and launched Oregon’s first and only legal on-farm internship program based on commercial farms.

This development allowed Rogue Farm Corps to meet the demands from farmers around the state to replicate the model. In 2014, the new South Willamette Chapter launched with three host farms in Oregon’s agricultural heartland. In 2015, Rogue Farm Corps will host interns on 16 farms in four clusters across the state: the Rogue Valley Chapter, the South Willamette Chapter, the Portland Chapter and the Central Oregon Chapter.

In addition to entry-level training, Rogue Farm Corps is launching a two-year advanced level training program in 2015. This program will build upon the entry-level program and help take students to management level experience and set them on the path to run their own farm operations.

This season, in addition to building the new creamery, Jonathon and Tyson will host a returning student on the farm at Yale Creek Ranch, carrying on the legacy of training new farmers.

When Tim Franklin died three years ago, it felt as if all the life was drained from the Little Applegate Valley. And it felt as if the dream of Yale Creek Ranch and the farming community was lost.

As the new creamery goes up from the ground at Yale Creek, the dream has been rekindled in the next generation. Jonathon and Tyson will soon start crafting cheeses and mentoring new farmers and build upon the legacy of the farmers who founded Rogue Farm Corps.

Training the next generation of farmers and ranchers has never been more important. The average age of farmers is increasing each year and the farmland is consolidated into fewer and fewer hands. This demands our immediate attention. New farmers are needed to tend the land and rebuild our food system and rural economy.

Rogue Farm Corps, along with mentor farmers like Jonathon and Tyson, is doing its part to train new farmers in Oregon. To learn more about the programs, to support the efforts or to apply for an internship position, please go to www.roguefarmcorps.org.