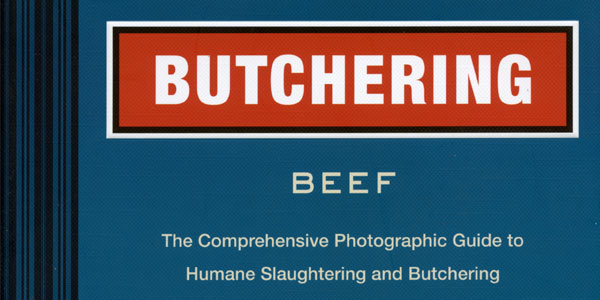 Since just after World War II, self reliant folk have looked on aghast as the main populace has rushed, Lemming-like, towards paper-thin convenience-oriented lifestyles that have stripped society of any and all direct skills for living and for the earned understanding of life forces. In the mid-sixties, having grown up in the suburbs of southern California, I came to the realization that I had zero comprehension of what constituted meat; where it came from, what was traded for it’s ready availability, what it meant to human sustenance, the historical significance, its glory, the destruction it comes out of, and the impact. At eighteen years old I passed through supermarket meat sections trying to imagine the form of the animal the meat came from and the whole butchering process. I had lived to that ripe young age and never even cleaned a fish! I made a pact with myself; I would not eat meat until and unless I was prepared to raise the animal and butcher it myself. I kept that promise for five years and became a connoisseur of adzuki beans and brussel sprouts. When I finally found myself on a farm, raising sheep, cattle, horses, chickens and geese I decided I was ready and I butchered a goose – cut its head off on the firewood chopping block and hung it to bleed out. We ate that goose for Thanksgiving. It was a big moment for me. Then I raised a bottle lamb, named her Cecile. She became a pet. We were very poor and quite hungry. It took a couple of days but I got up my courage(?) and cut fat Cecile’s throat and bled her out to dress for meat. I could not sleep for weeks after and my life changed in that experience.

In retrospect, as time educated me to process, I realized many times over how lucky(?) I had been with both of my first butchering experiences. I had nowhere to go for information. And there are so many things that could have gone terribly wrong. All of this abbreviated personal narrative is offered to background my critique of Adam Danforth’s new book series BUTCHERING (published with amazing sensitivity and intelligence by Storey Books).

Danforth’s BUTCHERING is an unqualified MASTERPIECE! One which actually gives me hope for the furtherance of human kind and the ripening of good farming everywhere because, in no small part, of this young author’s sensitive comprehension of the modern disconnect with food, feeding ourselves, and farming. Split into two volumes, “Beef” and “Poultry – Rabbit – Lamb – Goat – Pork”, here are 800 plus pages and thousands of photographs and charts detailing every aspect of humane slaughtering and butchering of all farm animal categories. 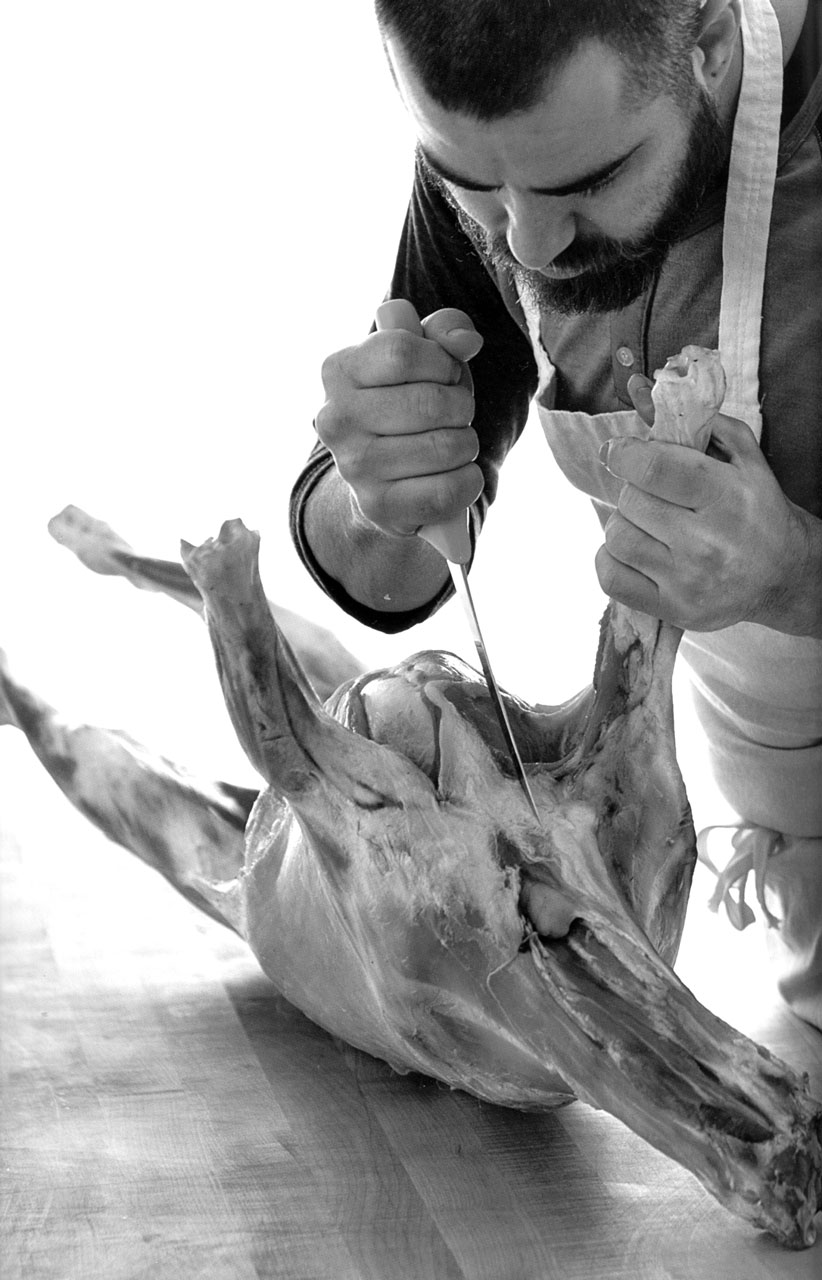 Fifty years have passed for me since that pact I made with myself about meat, and with those years have come myriad experiences with raising my own, hunting for meat and hides, commercial fishing where I came closest to feeling myself the hunted as a seven foot long blue shark rose from the ocean to strip me of my Salmon catch, to spending 7 hours in my farm kitchen grinding hamburger and carving cuts from a 2,000 pound bull’s carcass which had hung for 10 days, wrapped in an old sheet, in the rafters of my barn. The sticky odors of drying blood, the attacking flies, the coagulation of my spirit all assured me over and over again that this was a scene out of Dostoyevsky or Joseph Conrad not a chapter from a pretty cookbook. What I learned I learned from doing, sometimes right often wrong. Occasionally someone would step up and offer that I try it another way. Appropriately I thrill now to think what Danforth’s volumes might mean to young people coming up through the ranks of right livelihood, so much to be gained by having the head start this information offers. Wow. And Adam offers the best sort of information, a coupling of perfect illustrative photography combined with simple directions and perhaps most important a plain-spoken explanation of the whys – all of this coming from someone who cares deeply.

We raise beef cattle. We work with custom cutting houses and sell grass-fed all natural beef direct to our own growing list of customers. We have our own unique approach to this process that has given us excellent results but there is always room for improvement. Danforth’s exceptional writings on the subject give valuable depth to the reasons behind how animals are slaughtered (including Adam’s ever present admirable humanity), how and where the carcass is hung, temperatures and duration of hanging, refrigeration concerns, freezing elements, cutting and cuts, etc. Coming to the subject with some experience it is immediately apparent how comprehensive Danforth’s presentation is. That said, there are myriad variables that do not appear in this writing, things such as the tenderizing effects on molecular structure of meats caused by careful calibrated long-term thawing. Even so, the absence of such elements of fine tuning does not in any way diminish this volume, to the contrary BUTCHERING provides a most excellent and solid foundation to move forward from.

Immediately upon receiving Danforth’s volumes we decided to add these books to the SFJ Book Service and Kristi and I ordered two copies for our personal library at the ranch. These books are essential. Thank you Mr. Danforth for your expansive work.

What follows are excerpts from the Danforth Butchering books.

Aging in the Open

All aged meat will increase in tenderness, but there are other beneficial repercussions, depending on airflow and the ambient humidity of where the meat is stored. In one method, called dry-aging, water evaporates from the meat, sometimes reducing the original weight by as much as 20 percent. With the water gone, the muscle fibers shrink, and so does the overall size of the meat. This also concentrates the tasty, water-soluble protein fragments, strengthening the flavor of the meat.

During the dry-aging process, meat is kept at the proper temperatures while humidity and air flow are controlled. Humidity is held at 70 to 80 percent, allowing the meat to dry out gradually. If the humidity is too low, the meat will lose moisture too quickly, resulting in dried, unpalatable meat; if the humidity is too high, moisture remains on the meat surface, promoting rancidity and microbial development. Air circulation is also critical to maintaining humidity equilibrium and promoting evaporation. To allow air access to all parts of the meat, meat processors usually hang carcasses from rails and place cuts on perforated shelves, while high-velocity fans work to keep the currents continuous.

A dry-aged carcass or primal cut will have a hardened, blackened exterior that is very likely to be dotted with patches of white mold. All mold patches must be removed and discarded, exposing the underlying nutty, aromatic meat. Between the loss of meat from trimming and the loss of weight through evaporation, the edible portion of a dry-aged primal may be 70 percent of its original weight. This makes dry-aging an expensive process: it requires equipment, ample space, and lots of time for hanging and trimming, and it ends with a considerable loss of salable weight. Yet the result, with its unique taste, will fetch high prices and yield flavorful results, making up for the product loss.

Aging in a Bag

These days, dry-aging is rarely done within the commercial meatpacking industry. Carcasses are typically hung for the minimum amount of time to allow rigor mortis to resolve, after which they are broken down into primal cuts. Primals are then vacuum-packed and shipped to customers within refrigerated containers.

While the meat is bagged and in transit, the enzymes do the work of dismantling proteins and tenderizing muscle. Upon arrival to a customer, bagged primals can continue to be sorted and aged further or butchered into cuts. This approach is called wet-aging, and the results in tenderness are pretty much the same as in dry-aging. In wet-aging, the meat is aged within a hermetically sealed environment, staving off microbes and preventing any oxidation or moisture loss from the product. There is no need for controlled humidity or airflow, just temperature, so equipment and space costs are lower. Furthermore, there is minimal loss of product, thus maximizing salable weight. For these reasons, the adoption of wet-aging has been widespread within the commercial industries.

The downside is the resulting lack of flavor enhancement or development. The meat ages in a bag, spending days or weeks sitting in a collection of its own juices and blood. It picks up the flavors of these juices and blood: serumy, metallic, and irony are all adjectives used to describe the profile of wet-aged meat. Despite this, the benefits of minimal weight loss and convenient handling have made wet-aging the standard in modern meatpacking, an industry focused on speed and volume. 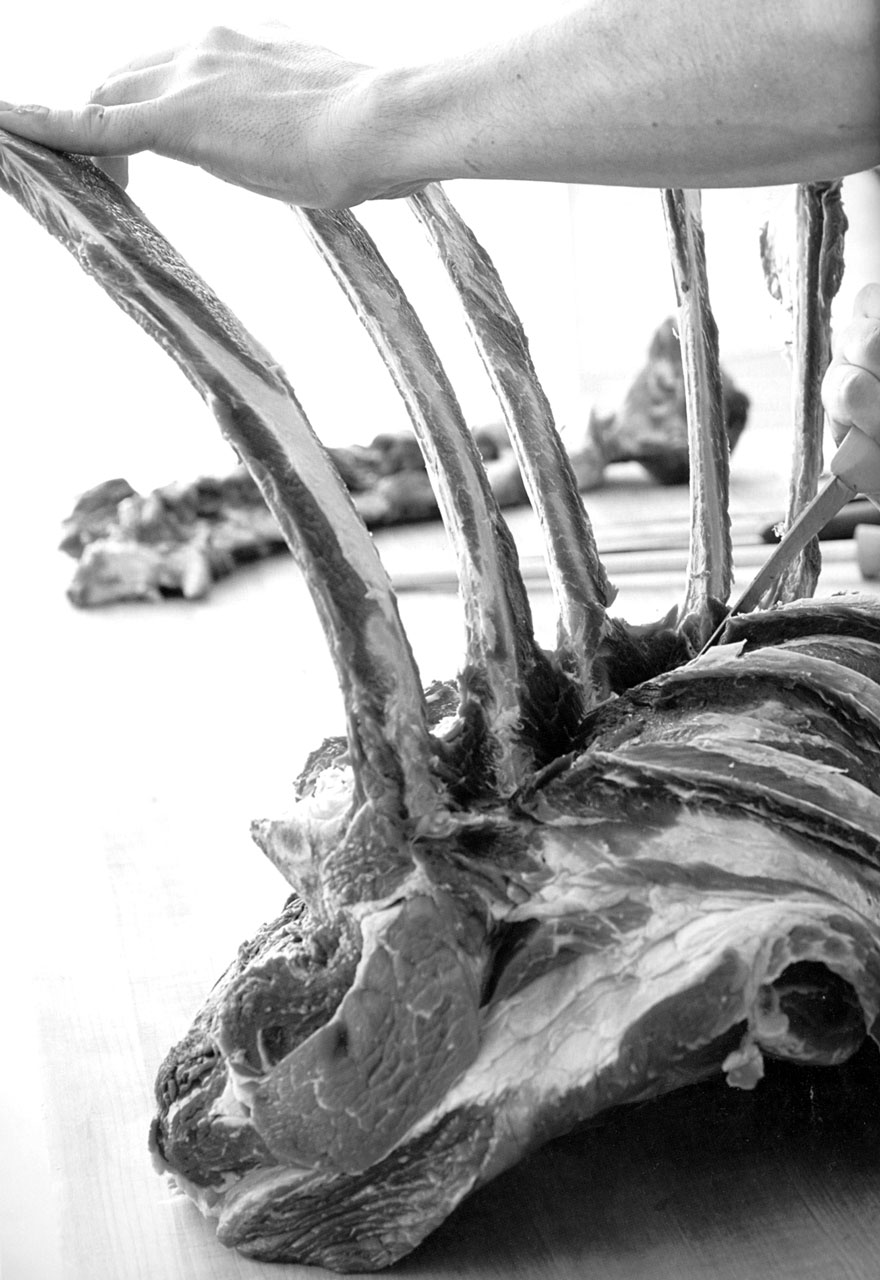