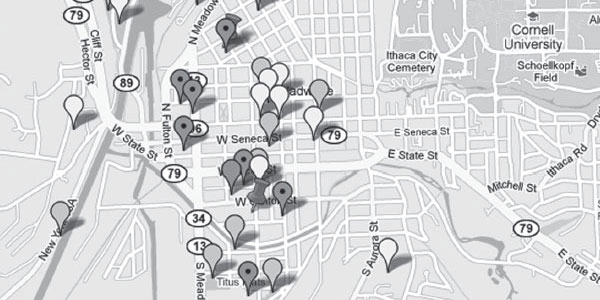 by Karl North of Marathon, NY

This series of articles is an exploration of designs for agriculture in Tompkins County to approach sustainability in a future of declining access to the cheap energy and other inputs on which our industrialized food system relies. In earlier parts of this series, I proposed principles of agroecosystem design, addressed the key issues of fertility, energy, water, and pest control, and pictured the future county food system as a whole: its historical context and implications, and interdependencies among the parts that will make them most effective as an integrated system. I said that providing for the local food needs of urban populations requires a design that integrates three overlapping categories of production systems: urban agriculture systems (many small islands of gardening in the city center), peri-urban agriculture (larger production areas on the immediate periphery), and rural agriculture (feeder farms associated with village-size population clusters in the hinterland of the city but close enough to be satellite hamlets).

In this issue’s article I will consider the needs and resources that will shape the design of urban agriculture systems in the city of Ithaca, and offer a case study as a design example.

The high institutional and population density of urban areas promotes labor-intensive production methods, community regeneration through cooperative management, and transport efficiency for agricultural inputs and products. The ability to have more farmers/acre permits the kind of management-intensive system that maximizes productivity achieved by close monitoring and good timing throughout the growing season. It allows a division of labor to manage diversified production integrated into one system. One neighbor could grow rabbits (Figure 1) and provide manure and meat while another grows vegetables, and a third concentrates on fruits.

The plethora of city institutions presents opportunities to build gardening appendages on existing social structures organized for other purposes. In the sudden energy shortage that transformed Cuba’s agriculture, schools, workplaces and even governmental institutions were quick to become partly self-sufficient in food production. As awareness builds that gardening is a form of physical education whose value is increasing relative to, say, football, schools will see the need to devote more playground space to school gardens.

The high productivity of urban agriculture has proven itself in many cities, notably in the severe food crisis that Cuban cities experienced in the 1990s. [1] Productivity in urban agriculture comes in great part from intensive design and management. The greater labor required for intensive production is potentially available in urban agriculture, and can make it highly productive in several ways. Space can be used more efficiently than in extensive row cropping. Intensive growers can plant many vegetables in permanent beds instead of rows, minimizing walk or machine alleys between rows, and concentrating soil building in the beds rather than the whole field. Also farmers can plant catch crops of fast maturing foods like salad or cooking greens in spaces between large slower maturing ones like broccoli. Tiered design that uses light efficiently is possible. Crops can be grown in companion polycultures to trade ecological services, legumes like pole beans fixing nitrogen for the corn that provides the pole, or a pea row climbing a wall while fertilizing a carrot row. Maximum use and close management of protective devices like frames and cloches permit not only season extension but also more effective temperature and moisture control of plant growth during the regular season. Finally, the consumers of urban-grown food are close enough to permit effective recycling of nutrients back into the garden soil, partially or totally eliminating the need for space for compost crops.

For all these reasons urban spaces have such high food productivity potential that they can be nearly 15 times more productive than rural farms. [2] In WWII residential “Victory” gardens in the US produced a quantity of fresh vegetables equal to the total commercial output of these foods.

Ithaca’s topography of central flatlands surrounded by steep hills presents distinctive opportunities and constraints for urban garden design in each area. Josh Dolan’s map (Figure 2) of current and potential community and school garden sites in Tompkins County illustrates some of the possibilities. [3]

On the hillsides some food production will require terracing, but the many south and west facing retaining walls and house walls in residential neighborhoods of Ithaca’s steep hills are opportunities for vertical growing. This will maximize use of space, which is important in urban gardens. Vine plants can sometimes grow either from the top of the wall down or from the bottom up. Twine or poles laid against the walls help plants like tomatoes or beans get a grip going up, and planks or slates shoved between wall stones support heavy fruits like melons or squash as they grow bigger.

Projections of climate change for the Northeast include a 20-30% increase in winter precipitation over this century, but hotter summers when water is needed for growing, suggesting a greater need for seasonal water capture. [4]

The hills of Ithaca have great potential for gravity irrigation if water is distributed downhill through many residential gardens. Pools at each site will store water to provide gravity irrigation to terraces via berms and swales. Institutional sites might justify tapping this gravity flow to power small grain mills or electric generators.

On the city’s flatlands current uses of many commercial sites will become obsolete in the energy descent. Energy inefficient businesses and parking lots will become prime sites for takeover by guerilla gardeners, building pressure for legalization. Water is relatively abundant in our environment, but because of its importance for highly productive food growing, water reserves collected from roof drains into garden-side irrigation pools will be vital to build resilience into urban production systems. More resilience can be achieved by routing roof water first into attic or upper story tanks for household use, and the overflow to irrigation pools.

A group of neighbors has decided to form a loose gardening cooperative, because a pooled effort will solve the core production problems of fertility, water, pest control and energy more efficiently than completely individual projects, and promote sharing of equipment and pooling of knowledge too. Individually in backyards they grow a few vegetables and fruits, often in containers they can bring inside for extended season growing. [5] Many neighbors have just enough small stock like rabbits, chickens or pigeons to process organic kitchen garbage. However, their yards are mostly too small for the amount of food they want to produce as a co-op.

The neighborhood group has agreed to devote most backyard space to compost production and irrigation water collection for the co-op. They have quietly attached composting toilets to their houses and built filter/digesters for household gray water, and little ponds to store grey water and roof water, while collecting support for legalization when the time is politically ripe. Eventually the city created property ownership and lease contracts with management agreements that provide incentives for ecological management like composting of residential waste streams and maintenance of food perennials on the property.

To make space for the main garden the neighborhood co-op razed a building abandoned as too costly to renovate for energy efficiency, and depaved an adjacent parking lot that became obsolete when the city got serious about public transportation. The land owners were happy to lend the properties in long term agreements in return for land tax credits that the city had created for land lent for urban agriculture. As in the urbanization of agriculture in Cuba (Figure 3), our neighborhood co-op often left rubble in place and created raised beds over it with soil imported from nearby rural farms and compost from backyard and municipal production sites. This photo also illustrates the use of a pest insect trap crop of corn planted at the end of the raised beds containing other crops.

The co-op employs a master gardener to design and manage the garden to include the polycultures, rotations of crops among beds, water, compost and mulch acquisition and application that will maximize the health of the system. Because it integrates a greater diversity of crops and habitats, this system achieves a higher level of sustainability than community gardening by individual allotment. Each household is assigned responsibility for working a section of the garden under the direction of the manager. As different crops or polyculture combinations rotate through each section, all neighbors gradually have become skilled at growing all the foods that the co-op produces. The manager arranges for extra labor when necessary, as in planting and harvesting, for compost and water from backyard ponds, and for supplemental compost from the city’s public composting enterprise.

The project design includes a number of elements not yet found in many urban gardens: hot and cold frames and nursery beds to feed transplants into the garden; glass bed covers to provide season extension; habitats for beneficials and other native species; insectaries, bird houses and trap and repellent crops for pest control; border hedges of nut and fruit bushes and trees and other perennial crops; and artistic corners in which to rest and enjoy the garden.

The neighborhood co-op provides regular shares of harvests to its members, and sells surplus produce in a market stand on site using the local county currency. Some members operate small processing enterprises to preserve co-op output for the neighborhood.

This model of urban agriculture may work in a number of locations, but many other models will be needed that are adapted to conditions of specific sites or parts of the city.

[2] Ableman, Michael. “Agriculture’s Next Frontier: How Urban Farms Could Feed the World.” Center for Urban Agriculture at Fairview Gardens. 2007. www.fairviewgardens.org

[4] Confronting Climate Change in the Northeast. A summary of a 2007 study conducted in part by the Union of Concerned Scientists.