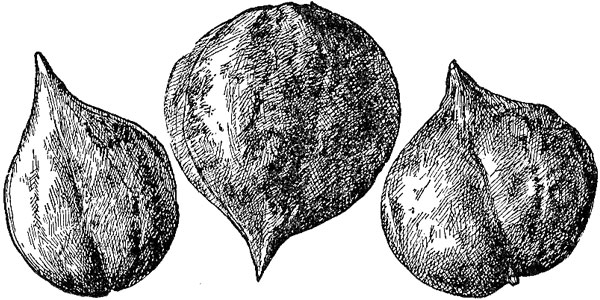 by Alfred Rehder, from Cyclopedia of American Horticulture, 1903

Ornamental and fruit-bearing trees, rarely shrubs, with deciduous, alternate, odd-pinnate leaves, and with inconspicuous greenish flesh, appearing with the leaves, the staminate in pendulous slender catkins, the pistillate in few- to many-flowered racemes; the fruit a large drupe, containing an edible nut. Most of the species are hardy, and are very valuable park trees, with a massive, straight trunk, and a light and airy broad top, the best being probably J. nigra, one of the noblest trees of the American forest. J. regia, J. Californica and the Mexican species are tender in the North.

Though many fungi and insects prey on the Walnut, none of them do very serious damage, the worst being, perhaps, the hickory-borer. The wood of the Walnut, which is easily worked and susceptible of receiving a beautiful polish, is much used for cabinet-making and the interior finish of houses, especially that of J. nigra and regia, which is heavy, strong and durable, and of dark brown color, while that of J. cinerea and Sieboldiana is light and soft.

The husks of the nuts are sometimes used for dyeing yellow, and the bark for tanning leather. The husk of J. cinerea has some medicinal properties. The nuts of all species are edible, and are an article of commercial importance, especially those of the European Walnut, which are the best. This species is extensively grown in the warmer parts of Europe, in California and in the east from Pennsylvania to Georgia. The nuts of the native species are also sold on the market, but mostly gathered in the woods, though a number of improved varieties are in cultivation. J. Sieboldiana and J. cordiformis, with nuts superior to those of the native species, will probably become valuable nut trees where J. regia is too tender; the nuts of both are much valued in Japan.

The Walnut grows best in moderately moist, rich soil, but J. cinerea is more moisture-loving and J. regia prefers well-drained hillsides. They are not easily transplanted when older, and therefore the nuts are often planted where the trees are to stand, but they may be safely transplanted when 2 or 3 years old, or even later when they have been transplanted in the nursery.

Propagate by seeds, which should be stratified and not allowed to become dry. A light, sandy soil is to be preferred, as the young plants produce more fibrous roots, while in stiff soil they are liable to make a long taproot.

The young seedlings are transplanted when about 2 years old; sometimes the taproot is cut by a long knife. Varieties are often grafted on potted stock in the greenhouse in early spring or are budded in summer, either shield- or flute-budding being employed; even top-grafting of old trees is sometimes practiced.

About 10 species are found in North America south to Mexico, and from Southeast Europe to East Asia.

Californica, Wats. Round-headed tree, occasionally to 60 feet, with puberulous branchlets; leaflets ovateoblong to oblong-lanceolate, acute or acuminate, almost glabrous or puberulous when young, 2-4 inches long; stamens 30-40; ovary almost glabrous or puberulous; fruit globose, 3/4 to 1-1/2 inches across; nut obscurely sulcate, rather thin-shelled. A graceful, ornamental tree, also used as stock for grafting in California. The nut is of good quality but rather small.

cordiformis, Maxim. Fig. 1199. In habit and foliage very near to the preceding, but leaves less pubescent, and nut very different, heart-shaped, much flattened, sharply 2-edged and with a shallow longitudinal groove in the middle of the flat sides, smooth and rather thin-shelled.

intermedia, Carr. (J. nigra x regia). Hybrid of garden origin of which two forms have been described. Variety pyriformis, Carr., with a fruit more resembling that of J. regia. Variety Vilmoriniana, Carr., with a fruit more like that of J. nigra. Probably also J. regia gibbosa, Carr., with a large, thick-shelled, deeply rugose nut, belongs here. Another not uncommon hybrid is J. quadrangulata, Carr. (J. cinerea x regia. J. alata, Hort.), of which large trees are known as well in this country as in Europe. Hybrids between J. Californica and J. regia and between J. Californica and J. nigra have been raised by Luther Burbank, and a hybrid of J. cinerea and nigra has been reported from Germany as J. cinereonigra.