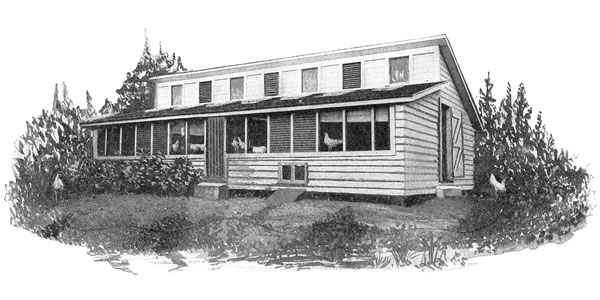 The goal of every flock owner is to produce eggs in late fall and winter when prices are highest. This can be done if the chicks are hatched early enough so as to develop into pullets that will begin laying in the fall. No matter how good the pullets are unless they are housed in a building which will provide them with warm quarters and at the same time give them plenty of fresh air, the maximum production cannot be secured.

Shown in the illustration is a modern sawtooth roof poultry house. This building is 32 feet long and 18 feet wide, which provides space for 100 layers. The building is set on a concrete foundation with a concrete floor and should be placed on a site so that it extends east and west and faces the south to get the benefit of all the sunshine available during the shortest days of the year and the early winter.

Probably no building will waste more money for the flock owner than the poorly built laying house. Every poultry owner who has watched egg production drop when a cold snap comes on can testify to this. The same flock, same feed, the same degree of health bring a heavy egg yield in a properly constructed house whereas in a house where there are drafts and low temperatures, egg production will be cut materially for the feed the hens consume in the cold house go to sustain body heat rather than to produce eggs.

To combat this condition farmers are paying more and more attention to the construction of poultry houses and to the materials used in them. Not only are the walls of the building constructed so as to be weatherproof but are insulated against cold. This insulation also makes the house cooler in summer and a great many owners use them for brooder houses in the early spring.

The insulated laying house is a profit-maker in another sense. It keeps the flock in better physical condition than is possible with a drafty; cold house. The insulated house is not only warm but it is dry and where an efficient system of ventilation is installed the air is kept fresh. Therefore, the vitality of the flock is kept at a high peak. If disease does appear in one or two birds it does not spread rapidly. It has been observed that rupe will run through a flock kept in a wet cold house before the birds first infected really warn the owner of the presence of the disease. The laying flock is a big investment on any farm and must be kept warm and dry.

Accompanying the exterior view of this poultry house are a floor plan showing the equipment required to handle a flock with the least amount of labor; an architect’s cross-section of the building and some of the construction details. It will be noted that the cross-section shows the dimensions of the lumber to be used in building a house and the height of the walls and the run of the rafters. A study of this plan and of the cross-section and details will assist the builder materially in getting a house that will keep his flock productive.

Chicken farms, like big cities, have their housing shortages, and today many a poultryman could use a vacant laying house for his rapidly maturing pullets.

On the poultry farm of today pullets begin to lay earlier and the old birds continue their efforts longer. As a result, the poultryman frequently has two flocks of producers about this time of year, and only one house or one group of houses in which to put them. And if the pullets are not put in winter quarters before production is accelerated, they will probably quit laying and moult when the change is made.

While all poultrymen recognize the need for early housing of the young stock, many delay because it means the selling of old birds which are still profitable.

This problem has been solved by Connecticut poultrymen through the use of the so-called barracks system, says L. M. Black, New Jersey extension poultry specialist, in reporting on the recent tour in Connecticut of the New Jersey State Poultry Association.

“Under this plan,” he states, “old birds are moved in August to a barracks house, which had been used for brooding chicks and rearing broilers earlier in the season. The drop in production which usually follows when layers are moved at this time of year is retarded by turning on artificial lights. Breeders are selected from these birds from the first to the middle of October, and allowed to rest until hatching season. The remainder of the flock is held so long as production is profitable, after which they are marketed.

“Such a system makes the permanent laying houses available for the pullets and enables the poultrymen to obtain best results from both classes of birds. In filling the pullet pens, the pullets should be graded for size and maturity. At the time of selection, observation should be made for the presence of lice on the birds. If found, each bird should be treated with blue ointment or sodium fluoride.”