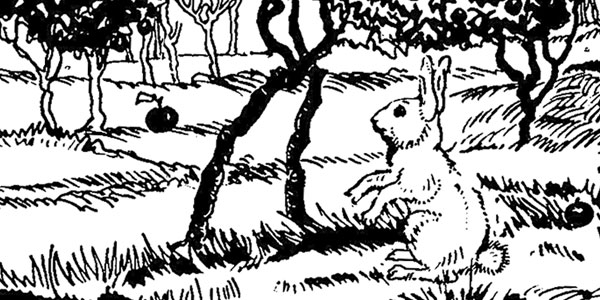 What Do Bored Rabbits Do?

What Do Bored Rabbits Do?

by Bobbie Shafer of Troup, TX

Children are famous for asking questions and many of them can’t be answered simply or some not at all. As we grow older, we still have questions, only we have the tools to find the answer to most. Still, there are questions that never come up. Some questions are foolish, some are nonsense, and some just never are thought of until the answer is sitting right in front of you.

When my husband, Gordon, and I bought our little country acreage just outside Troup, Texas, deep in the piney woods, we were fortunate enough to have settled between two warm and friendly families, the Herringtons and the Wilkens.

The Wilkens have several horses in the five acres behind their house where their two daughters, Rhonda and Robin, work the horses for the horse shows that they ride in each summer.

The house on the other side of them is owned by a family who travels a great deal and is seldom home and the next house from that one was where the manager of the local Dollar Store and her children live. Her children had once been interested in 4-H programs, which is an organization for young people who live in the country and compete in raising farm animals, growing farm crops, or doing agricultural experiments.

About two summers ago Sandy and Cager Wilkens and our family were in the backyard in a joint cook-out. They were telling us about seven guinea hens that had mysteriously shown up and were now living in their back pasture and often came up into the barn area which was next to our backyard. They also mentioned that they had seen two large white rabbits peeking now and then from the wooded area on the far side of their property. Cager admitted that he had bought some rabbit pellets and some chicken feed for the stray birds and bunnies as he couldn’t stand seeing anything going hungry.

It wasn’t long before Gordon and I and my daughter, Connie, who built a house by ours, heard the guineas and caught a glimpse, now and then, of the two rabbits. In a short while the guineas and rabbits relaxed and while the bunnies began to live in the neighbors boat house, the guineas started wandering in the horse training area, our back and side yard, and almost anywhere they pleased.

There is a danger in our area of coyotes. Late at night their howling and calling can be heard from the woods behind our houses and calling answers from fields across the highway in front of our house. Soon, the seven guineas dwindled down from seven to five, and the rabbits went from two to one.

We discovered that the children of the Dollar Store manager had once had not only raised the guineas, but also the rabbits for their 4-H projects, but after they graduated from school and moved on, the rabbits and guineas missed the attention and began to roam. Once they found food, shelter and other animals for company, they just decided to wander where they found food and good friends.

Then during the next year and a half the guineas roamed in the horse pasture and the rabbit seemed to be happy just foraging between the boat shed and the barn. He never came near our fence although the guineas came and went as they pleased.

Rhonda, Sandy’s daughter, came over to sit with Connie and I one afternoon and said she had seen the rabbit behaving strangely. It seemed to be following the guineas and wondered if we had noticed. We hadn’t, but told her we’d keep an eye out.

Sure enough one afternoon, Connie and I were burning dead leaves, fallen branches, and pine cones and Connie pointed out the rabbit in the pasture. We sat down to rest and have a cool drink and began to watch the guineas and noticed that the rabbit was acting braver than usual. He was hopping around the pasture and seemed to be circling the little flock of guineas who were happily pecking and clucking. The guineas would scatter around although they never wandered too far from the others.

However, the rabbit seemed to be concerned that they were too far apart and kept hopping around the birds and moving them closer together. Connie and I sat up and focused on watching the rabbit.

I love country living and spent most of my living on a farm and when my children were small, they, too, lived on our small farm when they were growing up. We have always been fascinated by animals and find their antics and company delightful. My daughter and I watched the white rabbits slowly herd the guineas, who by now were becoming agitated by the rabbits actions and were clucking more loudly than ever.

Just when he had them grouped together in a tight little knit, he backed off and charged through the center of the birds, scattering them in all directions. Connie and I howled in laughter and watched in disbelief as the happy rabbit proceeded once again to round up the guineas. As before, when he moved them in a little group, he’d race through the middle of them and hop gleefully around as they squawked, fussed and garbled their aggravation.

The noise of the birds had alerted the neighbors and now they, too, were outside watching the game the little bored rabbit had invented. We all were amazed that his thought process had created this little game of guineas bowling. He was the pin or guinea setter and was also the bowling ball. We watched for another twenty minutes or so until the guineas began to tire and obviously so did the rabbit. He hopped back to the boat shed, ate some food and disappeared underl the lawn mover, apparently for a nap. Once the rabbit left, the guineas calmed down and went back to hunting for food, however, one bird seemed to keep one eye peeled toward the boat shed just in case the rabbit decided to resume his game.

I never much thought of animals being bored, but I know the various stray kittens we’ve taken in have devised games to keep them busy and often irritate the other cats in their attempt to play. Apparently, now that I think about it, other animals must get bored, too. Obviously the rabbit did and I think the game he came up with was delightful. He got good exercise and gave the guineas a run for their money, too.

We all got a good laugh from the little rabbit and now I know what some rabbits do when they’re bored, at least what one does. He would round up guineas and race through them to watch them scatter. I think that was brilliant… I think he did, too.