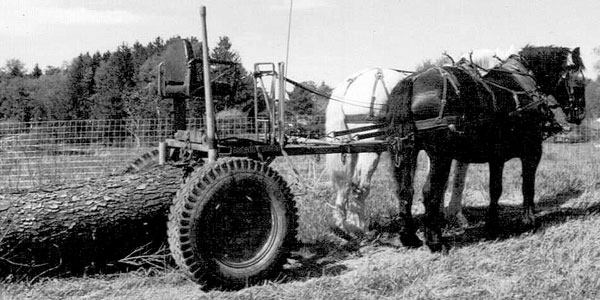 Why Keep A Dog If You Are The One Who Barks?

Why Keep A Dog If You Are The One Who Barks?

by Brandt Ainsworth of Franklinville, NY

A couple of years back I spent a couple of days logging with Donnie Middaugh. Since the log job was closer to my house than his, we used my horses to skid the job. Roy and Libby was the team. This team had skidded more timber than most Timberjack 230’s will ever hook onto, but at this point in their lives, they hadn’t skidded logs in a couple of years. I was pulling the team at horse pulls and kept them hard with occasional farm work, but mostly pulling an exercise sled to keep in shape for the pulls.

Donnie was working out a couple of details with the landowner, while I started cutting and skidding, (landowners are always happy, unless they think the loggers are going to make enough money to put food on their tables). The team was a handful to control. I was loud, as I barked orders. They were on the lines so hard I wrapped the wet lines around my hands to hold them as I sawed the bits trying to get the edge off them and hoping they would settle in after a couple hitches.

I was cutting up the second hitch on the landing when Donnie came back. Before I could shut the saw off Donnie was on the cart holding the lines. “Why don’t you cut a couple of those bigger cherry we marked at the bottom of the steep part. I’ll hook on after I hear the first tree fall.” Donnie said as he folded the long lines, and sat on them to keep them out of the way. It’s probably becoming clear to you that Donnie not only carries authority over the horses but also his logging partner.

I half slid – half walked down the steep hill carrying my saw and wedges to cut the first of four nice Cherry trees. After I made the notch, I was coming around to make the back-cut when I noticed Donnie on top of the hill waiting. I was impressed with how calm and alert the team looked. I made the back-cut then tapped one of my orange wedges a few times and the tree fell down into the pocket I intended, avoiding damaging any young trees for the next cutting. Feeling good about myself, I trimmed the stump shot and bells and began to mark out logs. One veneer log, one prime log, two grade ones were marked, (the top log may have been a grade two, but I kinda know the buyer). As I cut the last log loose from the tree and shut the saw off, Donnie was already swinging the team around and backing up to the butt end.

I went down to help Donnie put the choker on the log, but before I got there he was backing up the horses with one hand on the lines, as he put the choker on with the other. Effortlessly, Donnie backed the team into perfect position, in one fluid motion he hooked the choker to the cart, stepped off to the side , squared the team up, quietly calling on Libby to “stand up”, once both horses leaned into the collar and the chain was tight, Donnie chirped to the team and they moved the 4 logs ahead about thirty feet to the base of the hill before Donnie called out, “whoa”. Roy and Libby stopped and calmly leaned onto the load enough to keep everything tight, as Don got on the seat of the cart. He surveyed the hill as the horses rested. The horses body language said they were ready so Donnie tightened up the lines and started up the hill.

As the horses planted every hoof perfectly and exerted tremendous power climbing the steep hill with nearly 400 board feet of hardwood, I came to grips with the sad fact that I’m not in the same league as Donnie Middaugh in terms of horsemanship. He rested the team once on the way up, long enough to catch their breath. The pinnacle of our craft, (or art, if you will), is what came to mind as I watched my team work so calmly to crest the hill with Donnie’s hands on the lines giving them assurance, and firm quiet commands giving them confidence. This was the same team that nearly ran away with me a half hour earlier.

I only remember two things my eighth grade English teacher said, (as these pages might suggest). One was that they will have to “burn down the school to get me out of eighth grade”, the other is, “there is a fine line between fishing, and standing on the bank like a fool.” As the other three trees came up the hill and the rest of the job went up the other hills to the landing, I realized Donnie was fishing, and I was nearly standing on the bank.

I’ve found that a team of horses or oxen need a strong leader. One they can believe in to guide them the right way. It’s said that you should be more afraid of an army of a hundred sheep led by a lion; than a hundred lions led by a sheep. That leadership is the difference between the absolute best of the best teamsters, and the rest of us. Those who are head and shoulders better, can be counted in single digits. Men like Don Middaugh, (both Don Jr., and Don Sr.), Les Barden, (for both horses and oxen), and Howe VanOrd. All these men understood that there is no sense having a dog if you are going to bark yourself. Being a leader, and authoritative like the lion mentioned earlier does not mean being loud. Bands that can’t play good, play loud. Likewise when there is no strong leadership in organizations, sports, politics, or our craft of draft teams; the loud ones take over. A confident, authoritative command just above a whisper has more positive impact, than a command screamed at a volume that makes your blood run cold.

Yelling something louder doesn’t make it more true. There’s a new successful generation of coaches coming up who motivate athletes without yelling. Politics seems to go the other way. I guess loud still gets votes. Has anyone else noticed people on the news all seem to be yelling at you now? It’s rare for me to watch TV, but when the people start yelling at me I change the channel, but not to Ax Men. The yelling and fighting on there is ridiculous. Where I’m from loggers just don’t yell at each other like that, but then again we’re not on TV. Being loud has become a cultural thing, and that doesn’t speak well for future teamsters. Thankfully working horses and oxen is more or less a counterculture. Let me say right here, that I yell a darn sight more than I should. It’s hard to keep it in check. I realize that it is no help to any situation, and I’m ashamed after I yell, and trying to do it less. I still drive horses and oxen, and train dogs, but not as much as I used to. Despite efforts not to yell, I do it more now, than when nearly all my days were filled training animals.

Exhibit A: why working animals is good for our mental health. I’ve known Donnie Middaugh for 25 years or more. I’ve always been impressed with his horsemanship. I realized about 5 years ago that he is the most quiet teamster you’ll find. His success with horses is a direct result of his calm demeanor, among many other attributes. As I sat down to write this, I realized in 25 or more years I have not only never heard Donnie yell at horses, but also never heard him yell at people in a confrontation. That means he can cross 4300 on the dynomometer with a heavy team, or break a pair of colts to work, but he likely can’t get into politics or Ax Men.