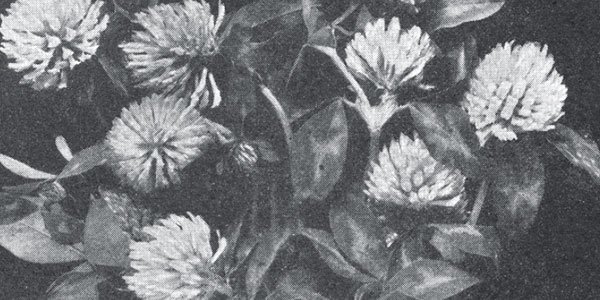 Good old info on a valuable plant. We encourage you to do your own regional homework to update this subject relative to varieties and diseases. – SFJ

The figures given in the 1930 census indicate that red clover is being used to a greater extent than during the period covered by the 1920 census. This is no doubt the result of the information given out by the State agricultural experiment stations and the United States Department of Agriculture. A still greater appreciation, however, of the reasons for the failure of red clover is needed to reduce such failures to a minimum. Farmers too often buy red-clover seed without asking its origin and scatter it on poorly prepared seed beds, with the expectation of getting a stand. With such methods failure is more common than success.

Partial or complete loss of stands, either in the seeding or in the second year, is considered as clover failure. The loss of stands because of continued growth of red clover has been referred to as a soil condition and has been called clover sickness. This supposedly toxic condition has repeatedly been studied, and it is now well known that it involves no mystery. The name “clover sickness” should therefore be discarded. Clover failure may result from one of the following causes or from combinations of them: Unfavorable soil conditions; unadapted or poor seed; poor methods of seeding; wrong treatment; diseases and insects.

Abnormal weather, such as severe drought, may also cause the death of seedling plants. Vigorous, healthy plants are much more able to withstand such conditions than weak plants.

By far the most common cause for clover failure lies in the soil. After the breaking of virgin soil, changes occur of which the farmer is often unaware. With cultivation the lime is leached downward, phosphorus is utilized by crop plants, the organic-matter content is rapidly lowered, and erosion begins. A soil condition is thus created which limits the successful growing of clover. The humus, lime, and phosphorus content of the soil are intimately connected with clover growing. An abundance of one may compensate for slight shortages of the other two. State agricultural experiment stations have clearly shown the value of lime to clover growing on soils that are acid. The acidity may be corrected by applications of limestone at the rate of 1 to 2 tons on slightly acid and 2 to 3 tons on more strongly acid soils. More recent investigations have shown that the lack of available phosphorus in the soil may be the principal reason for a poor growth or a failure of the crop. Applications of 200 to 400 pounds per acre of superphosphate will supply the needs of the plants. While any of the several methods of applying the limestone may be followed, one of the best is to fall-plow and during the winter spread the limestone, working it into the soil surface in the final preparation of the seed bed. The best time to apply superphosphate is immediately before or at the time of seeding, thus affording it an opportunity to be worked into the surface of the soil. Manure applied at the rate of from 5 to 10 tons per acre will greatly aid in obtaining and maintaining stands of red clover. In a few sections of the Clover Belt, the use of potash fertilizers has increased the yield of hay. Clover failures have not been known to result directly from a deficiency of potash in the soil.

Until 1926, one of the principal causes of clover failure was the use of unadapted seed. Large imports of foreign red clover were shipped into this country and sold throughout the Clover Belt. Experiments and trials with imported clover seed have clearly shown its inferiority in the eastern half of the United States. The losses from the use of this seed range from complete failure to maintain a stand, to fair stands, depending upon where the clover is grown, the severity of the winter, and the abundance of insect and disease enemies. Plants from foreign seed are not as winter-hardy in the United States nor as resistant to the diseases and insect enemies encountered in this country as clover which has been grown locally in a section for many years. In the western part of Oregon and Washington foreign red clover has produced good yields of hay. Its use in this area, however, is not recommended, as farmers generally are interested in growing seed for the eastern market and the use of such seed may result in failure. Although not as unsatisfactory as foreign clover seed, native seed from western Oregon and Washington is unadapted for use in the eastern Clover Belt.

As a result of an amendment to the Federal Seed Act in 1926, providing that all imported seed of alfalfa or red clover be stained, farmers are able to determine whether the red-clover seed offered for sale is of domestic or foreign origin. Ten percent of Italian red clover and seed of unknown foreign origin is stained red, while one percent of all other foreign seed except Canadian is stained green. One percent of Canadian red-clover seed is stained violet. The United States Seed Verification Service of the United States Department of Agriculture makes it possible for farmers to know the origin of domestic red-clover seed. The term “United States verified red-clover seed” is applied to seed, the place of production of which has been verified by the United States Department of Agriculture, and it does not in any way signify adaptation. Not all seedsmen carry verified seed, but farmers who are interested enough are able to buy seed of known origin.

The seed best adapted to any locality is that seed which has been successfully grown in the locality for a period of several years. In many sections the amount available is usually not sufficient to supply the demand, and seed must be brought in from other sources. Red-clover seed from a region similar to the one where it is to be planted will no doubt produce good yields. Recently seed stocks of clover adapted to the principal clover-consuming section have been taken to the Northwestern States for seed production. If seed from these stocks is kept pure, good yields of clover may be expected. It will probably be necessary, however, for such seed stocks to be replaced occasionally by new stocks direct from the consuming section.

Seed should always have a high germination and be free from weed seed and trash. The use of weedy seed of low germination will inevitably result in a failure to secure stands. The germination of the seed should not be below 75 percent, and it is preferable that it be 80 percent or above. In the past purple seed has been taken as an indication of high quality, but it is not necessarily true. Plants from yellow seed are just as vigorous and productive as those from purple seed. Seed that is large, plump, and bright is likely to be of high quality.

After purchasing good seed and applying the necessary fertilizer, farmers often fail to get stands because of a lack of preparation of the seed bed. Except under the most favorable conditions, a loose, rough seed bed is the forerunner of failure. An ideal seed bed is one in which the top inch of the surface soil is loose and free from large clods, and the soil is firm below. Rolling with a corrugated roller, in addition to the usual discing and harrowing, is one of the best methods for making an ideal seed bed. This implement firms the soil and breaks the large lumps. The seed can be either drilled or broadcast. If broadcast, care should be taken not to cover it too deeply, as this will result in a thin or spotted stand. Low rates of seeding, especially under unfavorable soil and weather conditions, give spotted stands. Increasing the rate of seeding to between 10 and 15 pounds per acre is good insurance against poor stands.

Under unfavorable soil conditions, planting in the spring 2 weeks earlier than usual may give good stands where otherwise the stands would be spotted or be failures. Tall, leafy, late-growing grains planted as companion crops often prevent the clover seedlings from making vigorous growth. Such grain crops lodge easily and smother the seedlings, or, the plants being in a weak condition, are severely injured or killed by hot dry weather when the companion crop is removed. Barley is generally the best companion crop for clover, although short, stiff-strawed, early-maturing varieties of wheat and oats are successfully used.

Often good stands of red clover are injured in the fall by close grazing or late cutting. Such treatment nearly always results in a thin stand or a complete killing by the next spring. It is desirable that the clover should make from 4 to 6 inches of growth before the time that severe freezing weather begins, and that this growth should not take place late in the season. Under conditions favorable for growth, blooming may occur in the fall of the seeding year. To insure strong growth during the second year, this blossoming should be prevented by grazing or high clipping.

Diseases of red clover play a very important role in clover failures. In general, red-clover diseases are most severe in sections where the winter temperatures are mild. In Kentucky, Tennessee, North Carolina, Virginia, Maryland, and parts of the States bounding these on the north, southern anthracnose, stem rot, and several other diseases under investigation at this time do serious damage to seedling as well as to second-year plants. Southern anthracnose is particularly virulent during damp, hot weather, and plants not resistant to this disease are either killed or are so weakened as to the susceptible to winter-killing or stem rot, which is active during the late winter and spring.

In the northern part of the Clover Belt northern anthracnose is often very severe on the first crop of the second year. The disease is not so virulent as southern anthracnose and seldom destroys the stand. In the Pacific Northwest stem rot is the most serious disease which attacks red clover. Mildew, the whitish powder-like coating seen on red-clover leaves throughout the Clover Belt, occurs on both seedling and second-year plants. While this fungous disease is injurious to the plant, it is not fatal. The use of disease-resistant varieties and strains is the best known method of control. This is especially true of southern anthracnose. Attacks of stem rot can be minimized by adopting rotations in which the crops between the clover years do not become infected and perpetuate the organism causing the disease. The cereals, grasses, potatoes, vegetables, and fruit crops are not attacked by this stem rot. In fact, almost any crop except a legume can be used in the rotation.

Although every clover field teems with insect life, proper rotations in which clover occurs not oftener than every third year will keep the damage at a minimum. The potato leafhopper may frequently attack seedling or second-year plants, stunting and dwarfing them to such extent that the yield is reduced from one-third to one-half the expected yield or the plants are winter-killed. European smooth clovers are particularly susceptible to leafhopper attacks, while the rough hairy American type is less seriously injured.