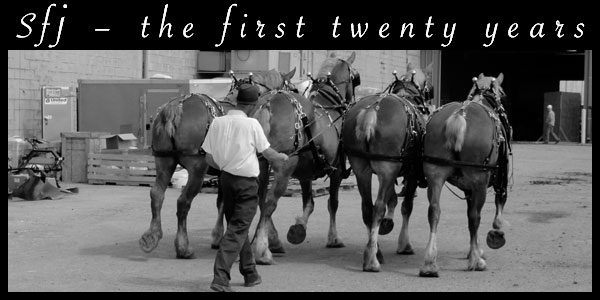 Words for the Novice Teamster

Words for the Novice Teamster

My favorite childhood memories are of cold winter days spent on my grandpa’s sleigh, feeding cattle. The sound of jingle bells always brings a clear picture to my mind of a hay-laden sleigh being pulled through the pristine-white snowscape by giant workhorses. The jingling of bells and the sound of cattle bawling their hunger was accented by the whoosh of the sleigh’s runners and the steady beat of the horses’ huge hoofs pounding on hard packed snow. In my memory, the air was always crisp and cold, the sounds sharp and clear. My nose and fingers would turn bright red and my whole body felt tingly. I’m sure that the tingles were caused more by my feelings of excitement than by the cold, for I remember standing next to my grandpa hoping that he would let me drive the team!

As a small girl, driving grandpa’s team was always a thrill for me. Being a child, however, I didn’t realize that I had a acquired a vocabulary rich in words (which were essential to working with draft horses) that most people were, and still are, generally ignorant of. In spending time with my grandpa, I had unconsciously learned to distinguish most of the harness parts by name, and I had come to know the commands and terminology used when working with draft horses.

Many people who are new to the world of draft horses are intimidated by what seems to them to be a foreign language. This “workhorse language” can be frustrating for novices who would like to use draft horses, or who would just like to understand what people who do use them are talking about. The knowledge of some basic draft horse terminology can end most of the beginner’s confusion about the special jargon used in this trade.

The first thing that new teamsters should learn is what the major harness parts are and how they are used. Harnessing a horse begins with putting on the collar. A horse collar is made of leather and is stuffed with straw; it goes around the horse’s neck and rests upon the shoulders. The collar provides a place to fasten the rest of the harness and distributes the weight of the load which the horse will pull evenly against its shoulders. The hames, which are rib-like pieces of wood or steel tubing, are fitted into grooves on the sides of the collar and are secured at the top and bottom by leather straps. Traces (or tugs) are strong, pliable strips of heavy leather which attach to the hames at one end and to the load to be pulled at the other. The rest of the harness parts are used to hold the collar and the traces in the proper position and come in many styles — usually dependent upon what type of work is to be done with them. Most harnesses do, however, have a cruper strap which fastens around the horse’s tail to keep the harness from riding forward on the horse’s body. A breast strap and a pole strap are used together to function as a braking and backing system when a vehicle with a tongue or pole is used. The pole strap is attached to the back of the harness (in a number of different ways with different styles of harness) and passes under the horse’s belly to hook on the breast strap, usually with a bolt and roller-assembly snap. This snap is then hooked to a neck yoke which attaches to the front of the pole.

Once the beginner has mastered harnessing his horse, he is ready to try ground driving. Ground driving is an exercise in learning to drive a team in which no vehicle or load is pulled, and the driver walks behind the horses. Ground driving is best learned under the tutorage of an experienced teamster with a well-trained team of horses. Workhorses respond not only to the pressure of the lines (reins) when being driven but also to voice commands.

Some of the basic voice commands used with workhorses are: get up, gee, haw, steady, whoa, and back or whoa back. “Get up” tells the horses to start moving ahead. “Gee” asks the horses to turn right, and “haw” is for a left turn. “Steady” is used to ask the horses to continue on slowly or to help calm them when they are nervous. “Whoa” is used when the teamster wants his horses to stop, and “back” or “whoa back” tells the horses that they are expected to back up. Another useful term for the teamster is step over. This command is used to ask the horse to step sideways — either in the stall so the teamster can get past or to move into proper position to be hooked to a load.

When the novice has learned all about ground driving, and he is finally ready to hook his horses to a wagon, there are still more terms that he should be familiar with. Most wagons and some farm implements have a pole or tongue that the two horses of the teams are hooked to which steers the vehicle. When the horses are standing in position in front of the wagon with one horse on either side of the pole a neck yoke (a short pole with a small metal ring at each end which the pole strap of each horse’s harness is snapped to and a larger metal ring in the center which slips over the end of the pole and stops about six to eight inches back) is attached to the pole straps of the horses’ harness and to the pole. The horses are then hooked one at a time to their individual singletrees on an evener, or double tree as it is sometimes called, with chains which are attached to the ends of the harness traces. A evener is an equalizing bar which runs behind both horses and is attached to the end of the pole near the wagon with a pin so that it is free to swing back and forth. Two smaller bars, called single trees, are attached to the evener on either side of the pole. The single trees are attached to the evener in such a way that they will pivot back and forth, and they have hooks which the trace chains on the harness are hooked to. Once the horses are properly hooked to the wagon, both with the pole straps and neck yoke and the traces and eveners, the teamster and his horses are ready to go to work.

A good knowledge of basic “workhorse language” can aid the novice teamster in learning to work with draft horses, and in so doing, to learn to become part of the team. In the truest sense, a team is not just two horses working together, but a teamster working with his horses — communicating and cooperating with each other to get a job done.