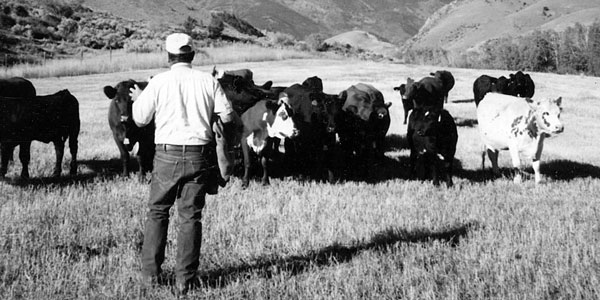 Understanding the way cattle think and why they react to you the way they do can enable you handle them in ways that will help rather than hinder your purposes. If you can “think like a cow” you can more readily predict what cattle will do in various situations and be able to handle them with fewer problems.

Cattle are very intelligent, and are just as “trainable” as horses. Like horses, they “reason” differently than humans. Their primary concerns are basic functions like eating, reproduction and protecting their calves. They are also curious, however, relying not just on instinct but also on their ability to figure things out. They have excellent memories and adaptability, which makes them very trainable. If you handle them with patience, understanding and consistency, they learn to trust you. They know what to expect from you and what is expected of them. They are creatures of habit, and if you help them build acceptable patterns of behavior they can be very easy to handle.

You must understand their basic nature, however, and expect the right things. If you know how a cow thinks, you can work with her type of reasoning instead of against it. Don’t get mad at her if she doesn’t react to something the way you would or see things the way you do. Her instincts and thought processes equip her to find the best grazing areas, to be alert for predators (especially when her calf is young, to defend him from danger), to remember the location of a water hole or a mountain trail she’s used only one other time in her life, or the bush that had the hornet’s nest she bumped into 3 years ago.

She may not understand, however, that she must travel along a fence and through a gate to get to some hay you put out for her in the next field — until she’s done it and remembers where the gate is. She can see the hay right through the fence and wants to go straight to it, and is frustrated because she can’t. She can learn about gates, however. A calf may take longer to figure it out and may keep trying to go through the fence instead of taking the long way around, but an older cow knows the way.

Before domestication (before being managed and protected by humans), cattle were preyed upon by wolves and other large predators. They relied on their senses of smell, hearing and sight to survive, responding to danger by running or fighting. They instinctively fear anything strange or new until they find out it won’t hurt them. They are alert to unusual smells, sights or sounds — ready to run (or to stand their ground and fight, if cornered, or protect a calf).

They may balk at a shadow or something strange along the trail or hanging on the fence, or spook at a sudden movement. Anything out of their ordinary experience can startle them. If you are bringing cattle to the corral, a stranger standing by the gate may alarm them or make them too suspicious to come through the gate. Be aware of the things that might scare them, and try to make moving and handling them a good experience rather than scary. Don’t leave your jacket hanging on the corral fence.

If they balk when you’re moving them, try to see what they are seeing. It might be a piece of paper blowing in the wind, a dog on the other side of the corral, or a wheelbarrow left beside the driveway. Calm cattle may stop and look at the things they are afraid of, whereas wild ones will get excited and run away (maybe even over the top of you).

Some cattle are smarter than others and figure things out more quickly when you change the feeding program or the route from pasture to barn, or the location of a gate. Some are flighty — more nervous, insecure or wild — while others are mellow and easy-going, more trusting and less easily spooked or alarmed. Manageable personality (or wild, untrusting nature) is a combination of inherited intelligence and emotional tendencies (the sire or dam may have been wild and spooky), along with past experiences that affect that individual cow’s attitude. A nervous, high strung individual can become less wild (gentling down enough to be tolerated in your herd) if she is smart enough to be trainable, to learn you are not a threat to her under ordinary circumstances.

Cow personality and manageability (disposition) are always a combination of genetics (inherited intelligence and emotional tendencies — hot headed or calm) and experience. How she has been handled from calfhood, with good experiences or bad ones, will make a lot of difference in her attitude toward people (or dogs) or management situations like going into a chute for vaccinations.

You can generally tell what kind of stockman a person is, by his cattle — whether they are wild and hard to handle, or easygoing. A good stockman who handles cattle with patience and calm manner will have gentler, calmer cattle than a person who always gets them excited when working with them. Cattle never forget a bad experience. They will balk at getting into the same situation again, refusing to go into the corral (or the barn) or chute.

USE HERD SOCIAL ORDER TO YOUR ADVANTAGE: YOU BE THE BOSS COW

Cattle are very social animals, depending on the herd for security. They are happiest when they are with other cattle (even if the other herd members boss them around). In the wild, before domestication, they depended on the herd for survival; there was safety in numbers (less chance of being singled out by a predator, and more horns to protect the babies from wolves).

Cattle were easily domesticated and easy to train, mainly because of their social nature (staying together in groups) and their acceptance of a pecking order in the herd. They readily submit to a higher ranking herd member and can transfer this acceptance and submission to a human. If cattle know and respect you, they will accept you as “boss cow”. They will submit to your domination — going into the corral when you insist, for instance, rather than questioning your authority and running off.

The best (and easiest) way to handle cattle is to have them accustomed to you, so they can calm trust you rather than being afraid (you are not a threat to them, as a predator would be) yet submissive to your bidding. You don’t want them to be such pets that they think they can dominate you. Cattle always think in terms of dominance and submission. Every herd member is either above or below them in the hierarchy, bossing them or being bossed by them. You must be a “boss” in the cow’s mind — not feared, but totally respected.

Never let an animal lose respect for you. Never make a pet of a young bull. A gentle animal that is not afraid of you thinks of you as one of the herd, so you must be the dominant one. It is bovine nature to try to dominate you and push you around. Cattle are always trying each other out to see who is higher in the pecking order. Don’t let your favorite cow or calf become pushy or it may become aggressive. Stockmen have been killed by pet cattle, especially bulls. It’s nice to have a friendly relationship with cattle, but they must still know you are the boss.

Pecking order is part of life for herd animals. The bossiest cow is at the top and she got there by being more aggressive, winning all the fights when other cows tried to challenge her. As top cow, she gets first choice of the best grass or hay, or supplement, and water. Others must use a different pile of hay or wait their turn at the supplement tub or water tank until she’s finished. Other herd members fight to determine who is next in line (who bosses whom). The most serious fights are among lower ranking individuals trying to defend their social position or move up to a better one.

The top cow rarely has to defend her title; everyone else has learned to respect her. She merely has to shake her head at them and they move out of her way, or let her have the hay or water. You can use this same sort of “mind control” (or psychological intimidation) to advantage when handling cattle that know and respect you. If they accept you as “top cow” it makes your job easier because they don’t challenge your authority and are willing to accept what you want them to do.

You don’t need to be able to outrun them to herd them, nor whip or beat on them to make them go somewhere they’d rather not go. If you’ve ever seen a bull herding his cows, you understand even more fully how the dominant/submissive relationship works. He can gather them up, or keep them from going somewhere he doesn’t want them to go, just by his threatening actions. The herd could easily scatter and outrun him, but he already has them “trained” to obey. If your cattle accept you as the dominant herd member, you can handle them easily on foot, and they won’t run off.

Many tribal people in other countries who handle their cattle on foot (taking the herd to and from the villages to graze) send their children out to herd the cattle. These cattle are the most highly domesticated–and totally manageable–because they have been trained from calfhood to accept the human as the dominant herd member.