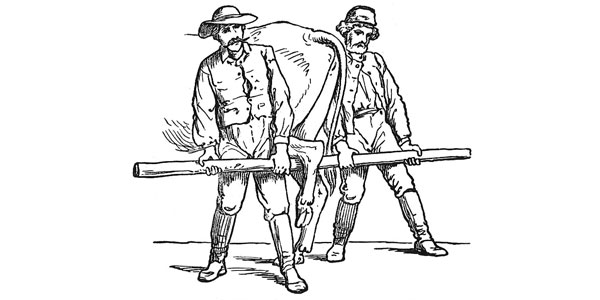 A Text-Book of Horseshoeing

by A. Lungwitz and John W. Adams Copyright 1897 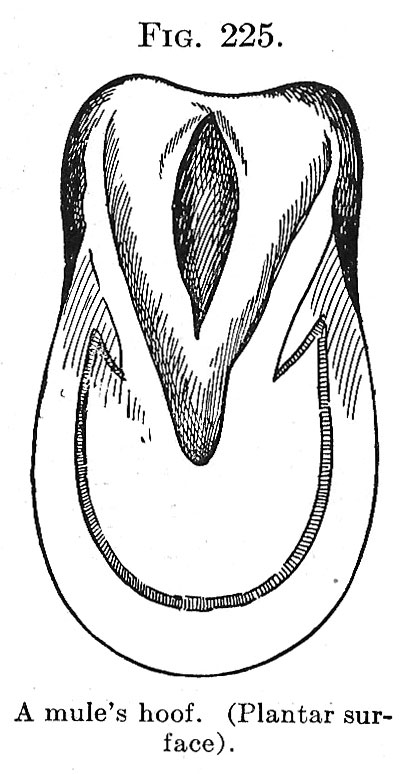 1. The shoeing of mules and asses is, as in the case of horses, a necessity if these animals are to be used for draft or saddle purposes on hard streets. The structure and characteristics of the hoofs of these animals are quite similar to those of the horse, differing chiefly in the form and thickness of the wall. The mule hoof is long and narrow and round at the toe, the sole is well arched, and the side walls are rather steep (Fig. 225). In the ass the narrowness of hoof is still more pronounced, the wall is relatively thick, the frog is particularly well developed in its branches, and therefore the hoof is relatively wide in the region of the quarters. The horn of both mule and ass is tough.

The shoes differ from those of the horse in no other respect than that they should be lighter and narrower. Four nail-holes are sufficient for an ass’ shoe, and five to six for a mule’s. On account of the hardness and toughness of the walls, we use nails that are short but strong in the shank; nails with weak shanks are apt to bend in driving. 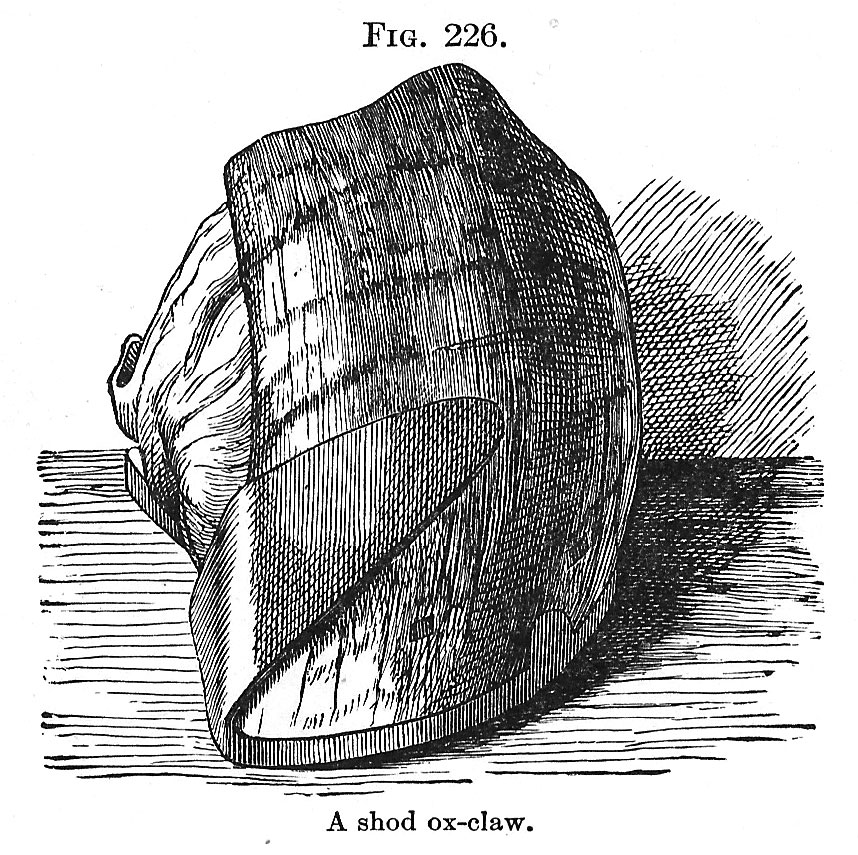 2. The shoeing of oxen is essentially different from that of horses, because the foot of the ox is cloven (split), the long pastern, short pastern, and hoof-bone are double, so that, instead of one hoof or claw, there are two upon each foot, distinguished as outer and inner. Each claw consists of wall, sole, and bulbs; the frog is absent. The wall is considerably thinner than that of the horse’s hoof, the sole is thin, and the bulbs are low. For these reasons the shoe designed for a claw must be thin, but wide. 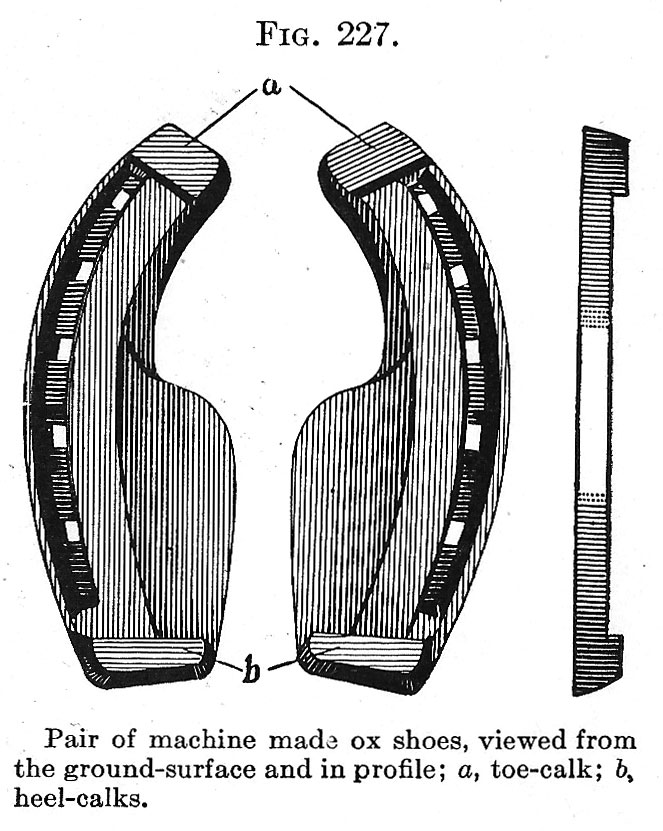 The holes must be punched fine and the nails be quite short and strong. On each shoe a long tongue should be made on the inner edge near the toe, and so directed that it can be turned upward and outward to embrace the toe of the claw. A small clip raised on the outer toe of each shoe will increase its stability. In some parts of Saxony the shoes are so made that the tongue of each shoe begins in the rear third of its inner edge and runs forward, upward, and outward, closely embracing the wall of the toe. The smaller clip is drawn up on the outer edge of the shoe close to the toe. These shoes are more difficult to make, but when applied sit more firmly and remain fast longer than all others. Machine-made ox shoes (Fig. 227) have no clip at the inner toe, and are frequently pulled and lost. For this reason they are inferior to hand-made shoes. An undivided shoe (the so-called “closed claw-shoe”) is unsuitable for oxen, because it deprives both claws of their natural, free movements. However, such a shoe is of advantage for heavy draft over hard and very rough roads, because it lessens the liability of the fetlock and coronary joints and the cleft of the claws to strains. 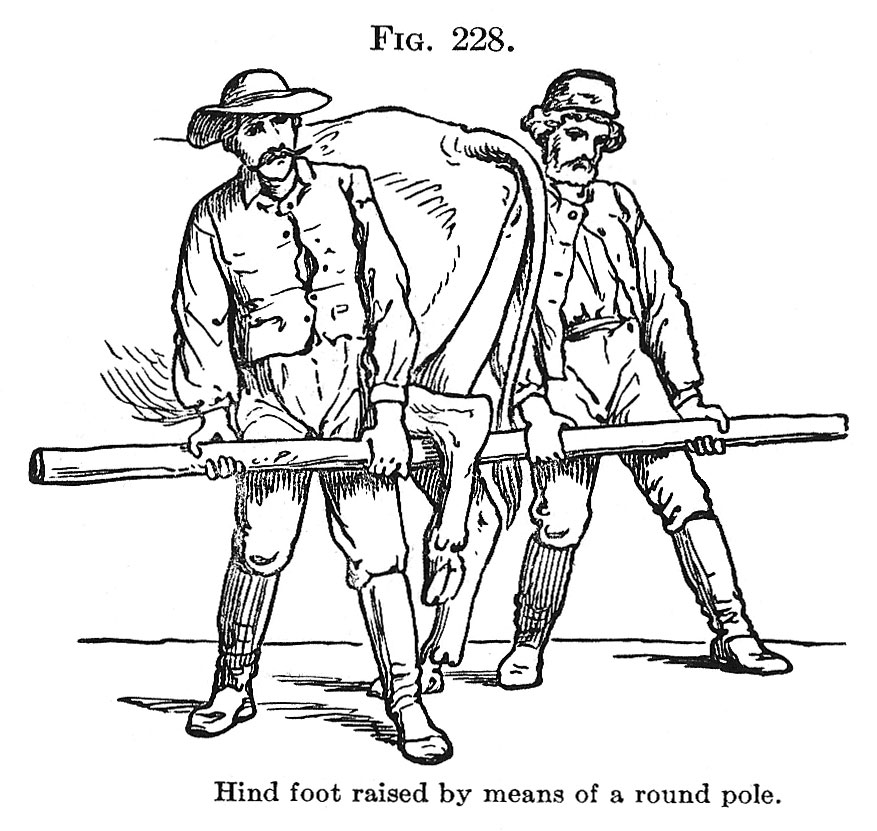 Great difficulty is often encountered in holding the feet during the operation of shoeing. It is necessary to fasten the head securely against a tree, post, or wall. A front foot may be raised and held by passing a slip-noose in the end of a rope or side-line around the fetlock and carrying the line over the withers to the opposite side, where it is held by an assistant. A hind limb may be controlled by passing a round pole in front of the hock of the leg to be raised, and, with a man at each end of the pole, carrying the limb backward and upward, in which position it is held; or the limb may be bent and controlled by tightening a twitch or tourniquet upon the leg just above the hock (Fig. 228). Oxen that continue to resist may sometimes be quieted by light blows of a short stick upon the base of the horns. In parts of the country where many oxen are shod stocks are in common use. 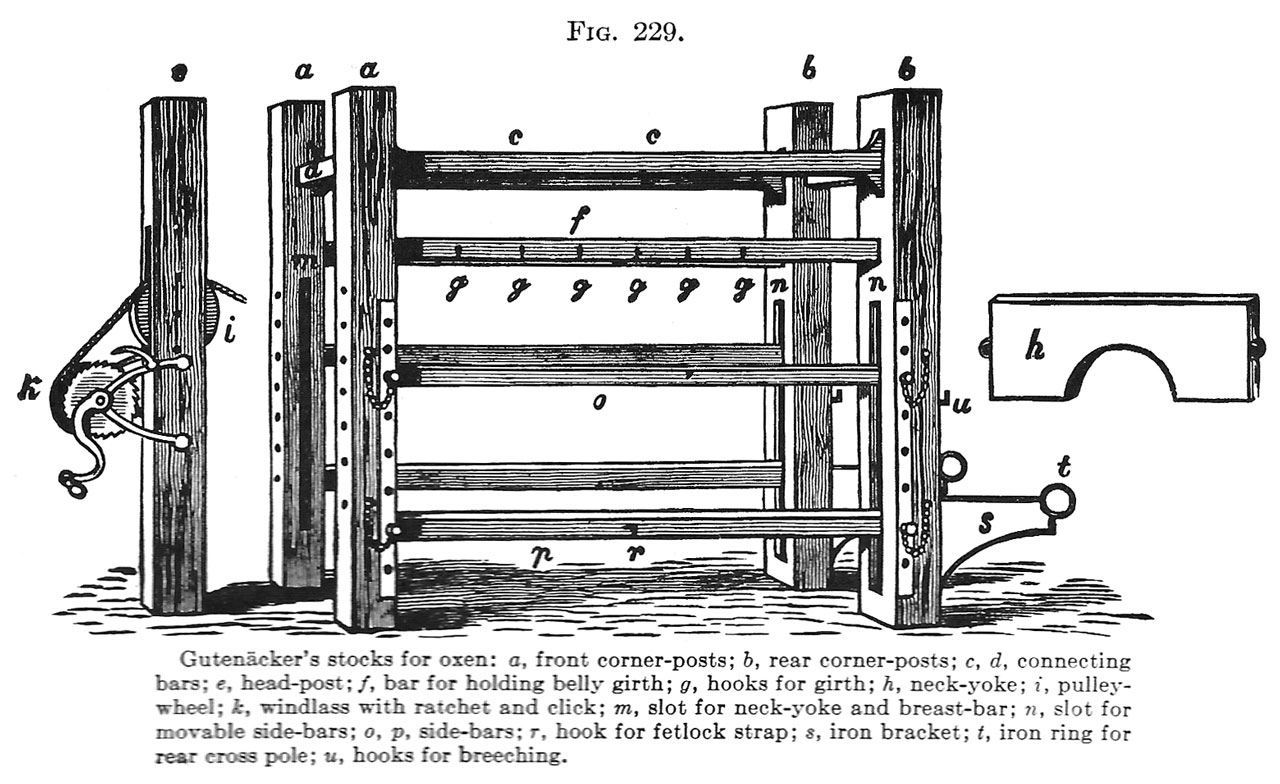 Very satisfactory stocks have been designed by Gutenaecker, of Munich (Fig. 229). The four corner-posts (a, a, b, b) are eight inches square and eight feet long, of which three feet four inches are solidly implanted in the ground. They are united by side- and cross-bars (c, c, d). In front of the corner-posts (a, a) and in the middle line stands a head-post (e) of the same dimensions as the corner-posts, provided with a slot four inches wide and twenty inches long beginning three feet from the ground. In this slot is a pulley-wheel (i), and below it a windlass (k) for winding up the rope which is tied around the base of the animal’s horns. The corner-posts are provided with a slot (n) three inches wide and three inches deep, within which are placed two movable side-bars (o, p), which can be set at desired heights and fastened by iron pins. Between the front and rear corner-posts of the right-hand side is an eight-sided roller with a ratchet and click at one end, and having on one of the sides six iron hooks, to which a girth is attached. On the opposite side of the stocks, at the same height, is a stationary bar (f) with six hooks (g, g) on the outer side. The belly girth is six feet long, six inches wide, and terminates at both ends in several strong cords two feet four inches long with iron rings at their ends. Between the front corner-posts are a neck-yoke (h) and a breast-bar which slide in the slots (m) and may be fixed at desired heights by iron pins. On the rear face of each rear corner-post is an iron bracket (s) one foot and a half long, with a ring (t) six inches in diameter; through which passes a round pole padded in the middle and kept in place by two iron pins. Above each bracket is a hook (u) to which the end of the breeching attaches.

Before an animal is brought into the stocks the neck-yoke is raised, the breast-bar lowered, and the girth left hanging from the hooks on the stationary bar. The ox is then led into the stocks and the rope which is tied around the base of the horns is carried over the pulley (i), fastened to the hook on the roller (k), and wound up till the head is tight against the head-post. The yoke and breast-bar are then placed in position and fastened, the breeching hung on the hooks (u), and the belly girth attached to the hooks on the roller, so that, if need be, it can be shortened till it bears the animal’s entire weight.

When no stocks are at hand, we may use an ordinary farm wagon or a truck wagon. Tie the ox with his head forward between the front and hind wheels. Fasten the large end of a binding pole to the spokes of the front wheel and let it rest on the hub. Swing the pole close to the ox and induce him to step over it with one hind leg, then raise the rear end of the pole, and with it the leg and so much of the animal’s hind quarters that the inner hind leg standing close to the wagon rests but lightly upon the ground. The binding pole may then be slung with a rope from the rack of the wagon or other stationary object and the outer limb held in the usual manner. By following this method a shoer with one assistant can easily and safely control the most refractory oxen.